Woman, 24, reveals how she made a three-course Christmas meal from food she found in BINS – including a salmon and dill starter and STEAK for the main

A woman revealed how she created a three-course meal using food she found in bins.

Lauren Mueller, 24, of Melbourne Australia, salvaged salmon, steak and mango sorbet that was thrown away and served up the dishes as an alternative Christmas dinner for her family last year.

The conservation worker explained they began preparing for the meal two months in advance, stashing away items that wouldn’t go off and picking up the perishables closer to the time. 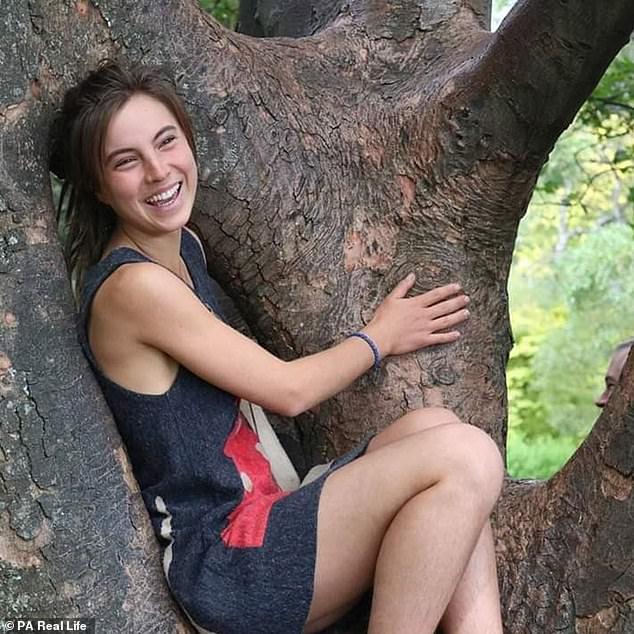 Lauren Mueller, 24, of Melbourne Australia, salvaged salmon, steak and mango sorbet that was thrown away and served up the dishes as an alternative Christmas dinner for her family 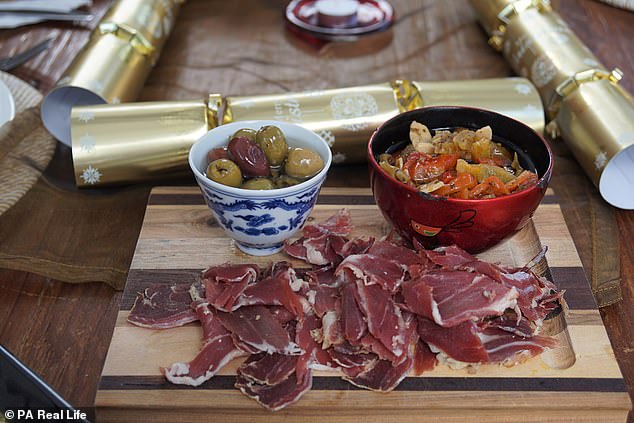 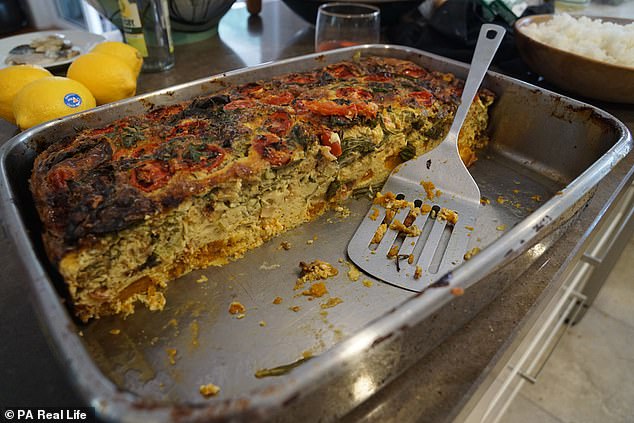 The family enjoyed a range of mains, including a frittata, pictured, made from bin ingredients

She explained: ‘We tried to go for things that wouldn’t go off, or make big batches of food as soon as we could then freeze them.

‘In the weeks before Christmas Day, we went on lots of extra bin dives to make sure there was enough fresh fruit and vegetables.

‘We even managed to get mulled wine, beer and cider, as well as Christmas crackers, napkins and a decorative wreath.’

She added: ‘We let everyone know in advance where the food had come from, as I know people have mixed feelings about dumpster diving, but everyone loved it and was really impressed we’d got it all for free from the bin.’ 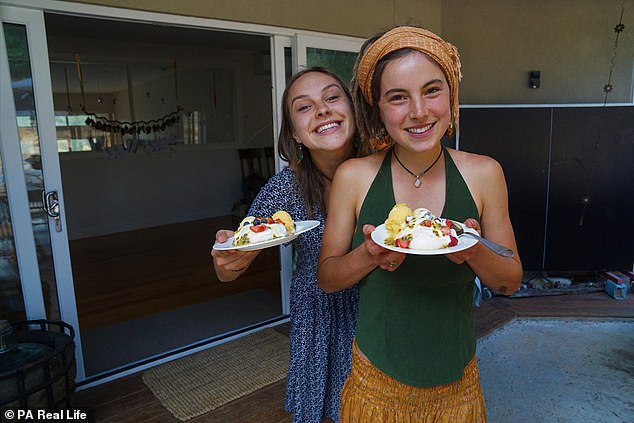 Lauren and her sister Corrin on Christmas Day 2017, when the family dined on a meal of food found in bins 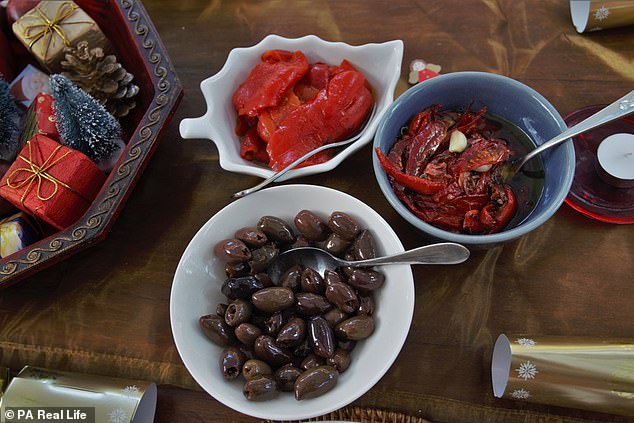 Homegrown sun-dried tomatoes and olives, salvaged from a skip, were served as a starter 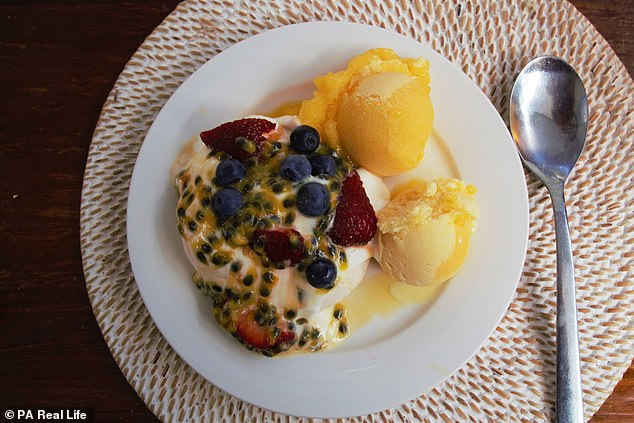 Christmas dessert was a meringue served with passionfruit, strawberries and blueberries

First introduced to bin diving by a friend at university five years ago, Lauren, then studying environmental science, followed suit in a bid to save money.

She continued: ‘You think bin, you imagine rats, cockroaches and mould. There are all these negative connotations which are hard to get past.

‘Once I went, however, I realised all the food was clean and fresh, and mostly still in its packaging. I was disgusted at how much was going to waste, but at the same time excited at the idea of getting involved.’ 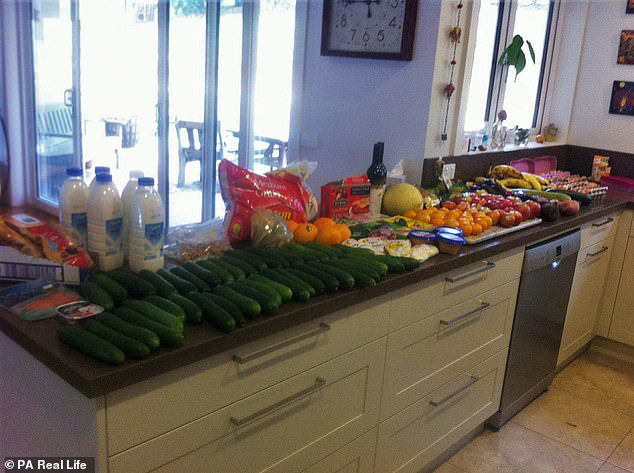 One of Lauren’s hauls included cucumbers, fruit and wine. The conservation worker estimates some 70 per cent of her meals are made from ingredients found in the bin 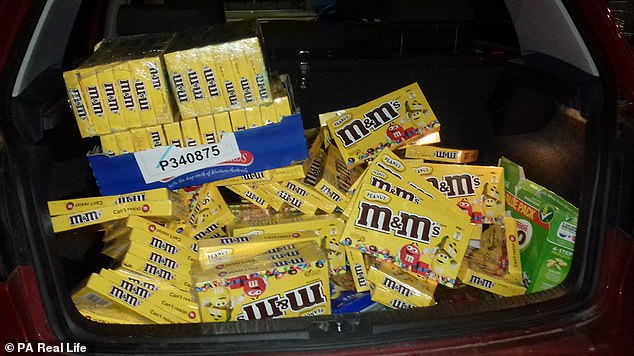 A haul of peanut M&Ms, pictured, have been among Lauren’s more unusual bin findings

Lauren, who bin dives once a week, has since become something of an expert and has a route of 10 dumpsters she raids, including ones from supermarkets, bakeries and even off-licences.

She estimates that 70 per cent of her meals are made from food found in bins.

‘It can be quite time consuming, so we always try to make sure there’s enough time to sort through everything and share it all out,’ she said.

An advocate of healthy eating, she likes to stick to places where she knows she will be able to score fresh fruit and vegetables – although at times, she has come home with slightly more bizarre items. 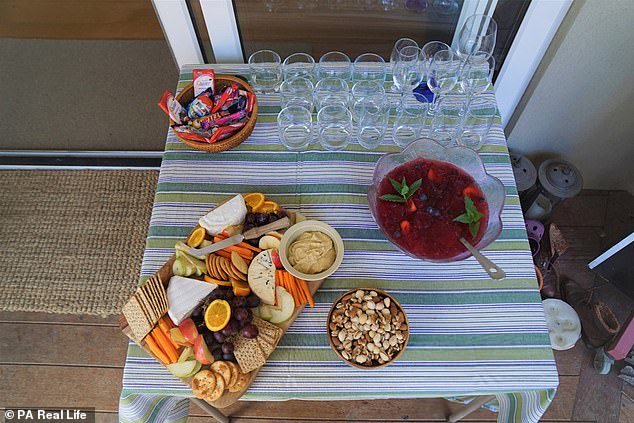 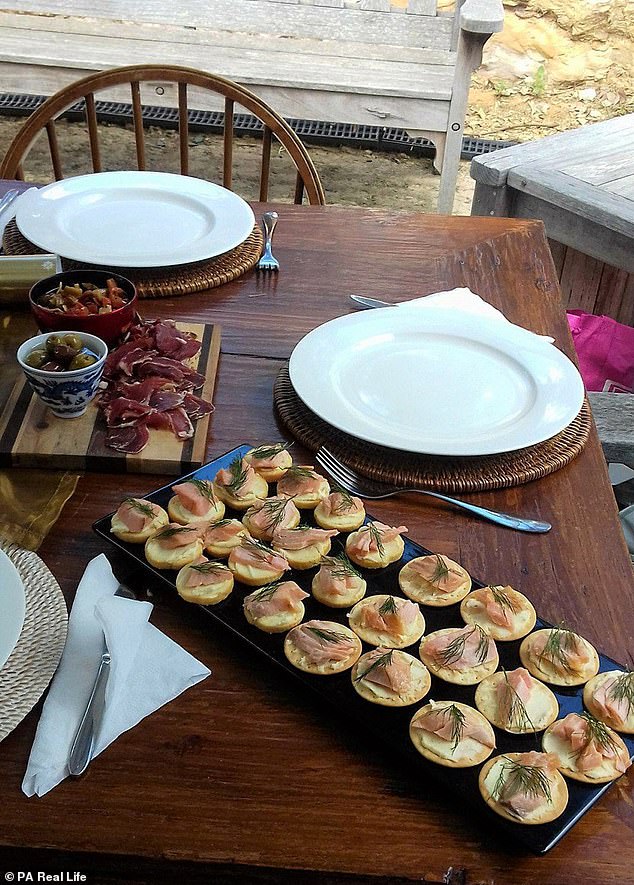 As well as traditional starters and a few mains, the family also bagged crackers from the bin

‘Just before Christmas 2017, we got around 85 boxes of peanut M&Ms, which was great,’ she said. ‘It really saddens me to see the amount being thrown away, to the point where, about a year ago, when I was struggling with anxiety anyway, it’d make it worse if I ever missed out on a dumpster diving session.’

On the odd occasion, Lauren said police or bystanders will come over and ask her and her fellow bin divers what they are doing, but on the whole, she has experienced little in the way of negativity.

She added: ‘Most of the shopkeepers are really great about it and tell us to take whatever we like so long as we’re careful and don’t get sick – which none of us ever have.’

For Christmas this year, although planning a more low-key celebration, she estimates the majority of her menu will be comprised from food she has managed to salvage.

She said: ‘I would convince anyone to give this a go. As a society, we waste so much food every year, and I hate to think of how much that ends up in landfills is completely edible.

‘Not only does dumpster diving help reduce waste and pass food on to those in need, but it saves you money and introduces you to a great community.’