Will cutting my family’s meat intake actually help the environment? Last month when I marched with my daughters for School Strike 4 Climate I was inspired by the passion and competence of our next generation and I came away fired up and optimistic.

But since then we’ve learned that our recycling is being dumped in landfill, our current coal-carrying federal government has signed off on approvals for the Adani coal mine and has backflipped on their support for electric cars, and the giant turtle has become functionally extinct. 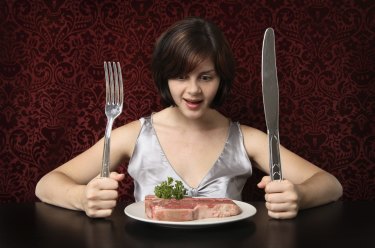 Reducing my family’s meat consumption was easier than expected.Credit:Fairfax Media

Other than making my vote a #climatevote at the upcoming election, I feel like I am personally not doing enough to safeguard the planet for my children.

So naturally, my mind has turned to cow farts.

So much so, that the Intergovernmental Panel on Climate Change’s (IPCC) Special Report “Global Warming of 1.5 ºC” released last year recommended, among other measures, “a shift from over-consumption of animal-related to plant-related diets”.

Similarly, last year, an article published in the journal Science claimed that the single biggest way to reduce our impact on the Earth is to cut our meat and meat products.

I recently started reducing my family’s meat consumption. It was pretty easy too. My kids didn’t even notice when red meat was replaced with fish or chicken and they only howled about the tofu and legumes a few times before they submitted to their new reality.

But I wonder if I’m actually achieving anything other than making myself feel better. Are meat-free days just another piece of middle class feel-goodism, where we think we’re doing the right thing, only to find that things are far more complex?

I asked around and found that the answer to whether reducing meat in our diets is good for the environment is…it depends.

Specifically, it depends on what you replace it with.

There’s no such thing as carbon-free food. All food has a carbon footprint. The trick is to minimise it. And this is where things get complicated.

While there’s a general consensus that cutting down on intensively farmed livestock is a good thing for the environment, if you’re replacing it with fruit and veggies flown in by plane from South Africa or Argentina, which are then kept in refrigerated storage for six months, then how much are you actually reducing your carbon footprint?

The air miles that the food has travelled to reach the plate is only one consideration. There’s also the packaging, water consumption, production processes, and the potential impacts on endangered species to consider.

And it turns out that even the “good” meats like fish can sometimes be bad.

Associate Professor Dr Susan Lawler from the Department of Ecology, Environment and Evolution at La Trobe University says it’s wrong to assume that fish is a more eco-friendly alternative.

“People think that they should eat fish instead of red meat but if a fish is ocean caught, rather than farmed, then that also does environmental damage,” says Dr Lawler.

While pole caught tuna is good for other marine life, it’s worse for the climate than other sources of protein — with the exception of beef.

If you think you’re doing the right thing buying sustainably-fished tuna perhaps you also need to reconsider. Research reported in New Scientist in 2017 found that while pole-caught tuna is good for other marine life, it’s worse for the climate than other sources of protein — with the exception of beef.

Dr Lawler says that a simple way to make an environmental contribution is to eat more plants.

“We need to eat as low on the food chain as possible, but we also need to watch our food miles and eat local,” she says.

I’m totally on board with eating locally, but even that’s complicated. In my neighbourhood the farmer’s markets are on once a month. What are we supposed to eat for the other three weeks?

And, the free-range, grass-feed elephant in the room is that the pricing of locally grown food can be prohibitive. While we might not like to say it out loud, farmers markets are a middle-class luxury.

I’m sure I’m not the only person who desperately wants to be part of the climate change solution rather than the problem, but just doesn’t know how.

If only there was an eco rating system on food, similar to the one we have for electrical appliances.

The food rating number could take into account the supply chain, the packaging, the farming and processing methods, the water consumption, and the impact on endangered species.

It’s a fair bet I’m not the first person to think of this and there are complications beyond my understanding, but for the love of all that’s green, I’m trying to do the right thing here, people!

Will someone please just give me a definitive, evidence-based, practical answer?

Kasey Edwards is the author of the Chess Raven Chronicles under the pen name Violet Grace.