Why we'll miss our Aussie Neighbours! 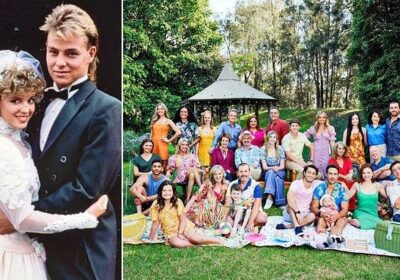 Why we’ll miss our Neighbours! From the scandals, the daft storylines, to the bit-part players who went on to be Hollywood stars – how an Aussie soap became a cultural sensation

Who’d have thought a sunny Australian soap opera centred around a suburban cul-de-sac on the other side of the world would become a British pop culture phenomenon? Originally scheduled as a bit of daytime light relief, Neighbours became one of the biggest TV successes of all time.

At its peak it pulled in a staggering 20 million viewers, happily sitting alongside home-grown heavyweight soaps like Coronation Street and EastEnders – and providing a breath of fresh air in late-80s Britain.

It launched the careers of Kylie Minogue and Jason Donovan as well as Hollywood A-listers Margot Robbie and Guy Pearce – but now it’s coming to an end. Its last-ever episodes will air this Friday and promise to be an emotional affair as some of Neighbours’ most famous faces drop by to say goodbye. 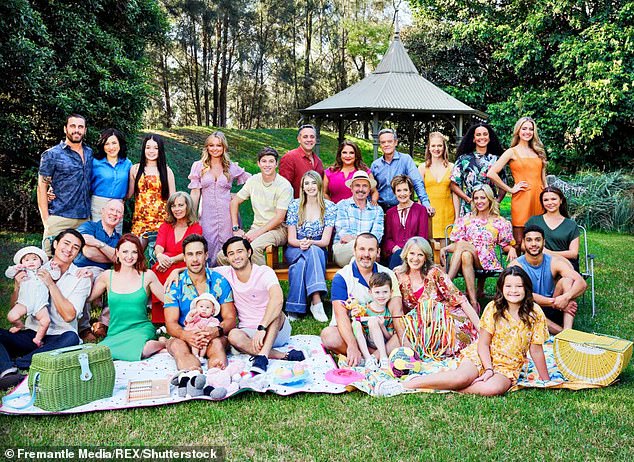 The final season cast. Australian soap opera Neighbours will air its final-ever episode this week. At its peak the soap pulled in a staggering 20 million viewers, and launched the careers of stars such as Kylie Minogue and Jason Donovan

The show was the brainchild of Australian TV mogul Reg Watson, who’d spent time in the UK working on Crossroads. He’d seen how hugely popular community-focused soaps like Coronation Street were, and created Neighbours with the UK market in mind.

The idea was to show Australia in a new light. Instead of sandy beaches and the dry, sweltering outback, it would centre on a middleclass urban neighbourhood – Ramsay Street in the fictional Melbourne suburb of Erinsborough.

Instead of bleak, kitchen-sink grittiness, there would be wholesome, uplifting family content.

The People Next Door, No Through Road and One Way Street were toyed with as titles before Neighbours was eventually settled upon – the catchy theme tune composed by Tony Hatch (some may remember him as the original tough judge on 70s talent show New Faces), who was also responsible for the music for Crossroads and Emmerdale.

The first episode was broadcast on Monday 27 October 1986 on BBC1 after the lunchtime news and repeated the following morning. It instantly drew ratings of around four million from an audience largely made up of housewives and students. 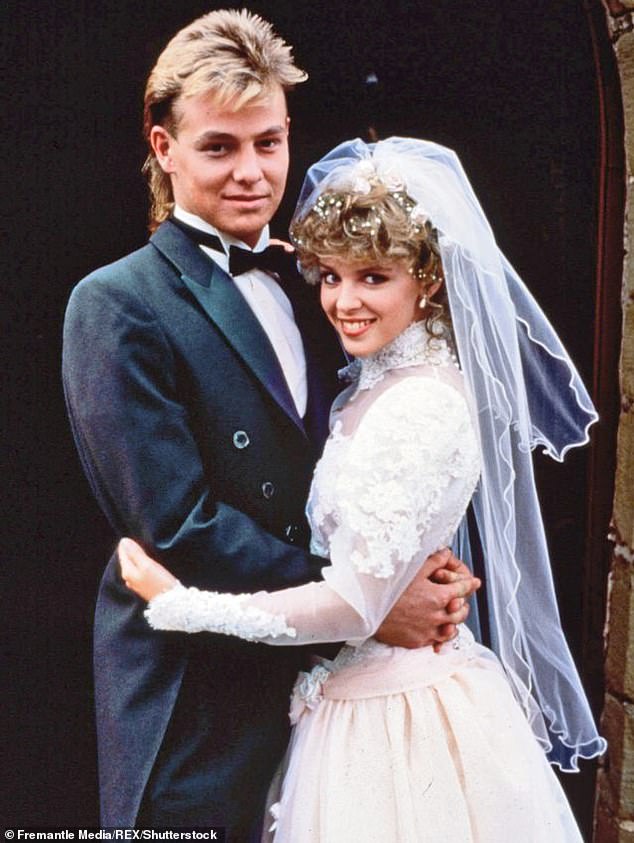 Ratings hit a high in November 1988 when 19.6 million tuned in to watch the wedding of Charlene Mitchell (played by Kylie Minogue) and Scott Robinson (Jason Donovan)

Ratings hit a high in November 1988 when 19.6 million tuned in to watch the wedding of Charlene Mitchell (played by Kylie Minogue) and Scott Robinson (Jason Donovan)A year after it first screened, the decision was taken to move the repeat to teatime, four hours after the lunchtime broadcast. Coming at the end of children’s programmes and before the six o’clock news meant the episode was perfectly placed to capture school children off the back of kids’ shows and adults coming in from work. It was to be a masterstroke.

In his autobiography, It Seemed Like A Good Idea At The Time, then BBC1 controller Michael Grade said the move came about after his teenage daughter remarked on how popular it was with her classmates. It wasn’t long before Neighbours became firmly ensconced in the viewing habits of the nation, along with the main three home-grown soaps, regularly pulling in 14 million viewers.

Ratings hit a high in November 1988 when 19.6 million tuned in to watch the wedding of Charlene Mitchell (played by Kylie Minogue) and Scott Robinson (Jason Donovan). To put that into perspective, that’s two million more than watched Prince Harry marry Meghan Markle.

Within two years Neighbours had become a cultural sensation. Girls copied Charlene’s perm, boys wanted Scott’s mullet, and kids everywhere mimicked the Aussie lingo and talked about ‘wagging school’ (playing truant) or told one another to ‘rack off’ (get lost).

Neighbours was also widely held responsible for the antipodean ‘upward inflection’ the habit of making statements sound like questions) becoming part of our speech pattern.

Not that everyone was delighted with it making such an impression on us. Julia Gillard, former Australian prime minister, blamed the show for making us ignorant of her country’s other cultural achievements.

‘As proud as we are of Kylie and the crew, you just want to say, ‘Yes, but can we talk about the rest of it?’

The success of Neighbours paved the way for another Aussie soap, Home And Away, which began airing on ITV in 1989 and, although it never quite matched the popularity of Neighbours at its peak, it is still broadcast on Channel 5.

STARS IN THE MAKING 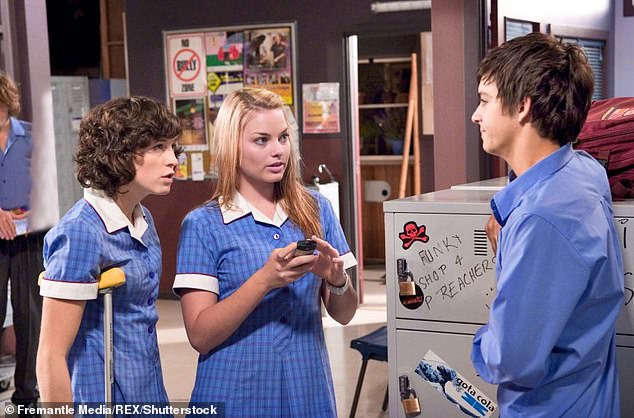 Eloise Mignon as Bridget Parker, Margot Robbie as Donna Freedman, Matthew Werkmeister as Zeke Kinski in 2008. Margot’s new movie Barbie is due out next year

As two of its most famous stars, Kylie and Jason both quit Neighbours in the late 80s to pursue hugely successful pop careers. In real life Kylie and Jason dated for three years but with tween audiences in mind, they did their best to hide it and appear young, free and single.

Theirs weren’t the only musical careers that came out of the soap. Holly Valance (who played Flick Scully and is now married to British property tycoon Nick Candy) had a string of hits, as did Natalie Imbruglia (Beth Brennan). Batting for the boys were beefy Craig McLachlan (Henry Ramsay) and Stefan Dennis, who played baddie Paul Robinson.

When they weren’t on Top Of The Pops you could find them on the cover of teen magazines like Smash Hits or Just 17.

While Neighbours never took off in the US, that didn’t stop the soap launching the careers of some of the biggest stars in Hollywood today. Chris Hemsworth, best known for playing Thor, appeared in one episode, while his brother Liam, known for the Hunger Games movies, was paraplegic Josh Taylor.

Playing troubled teen Mike Young was Guy Pearce’s first acting role. He stayed in the show for four years and is now a much-in-demand actor, seen recently opposite Kate Winslet in Mare Of Easttown.

To date, Russell Crowe is the only former Neighbour to have won an Oscar. He played ex-con Kenny Larkin in four episodes before going on to win an Academy Award for Gladiator.

But it can only be a matter of time before Margot Robbie, who played Donna Freedman for three years and is now one of the hottest properties in Hollywood, has an Oscar on her mantelpiece. She’s previously been nominated for her roles in I, Tonya and Bombshell, and her Barbie movie is due out next year. 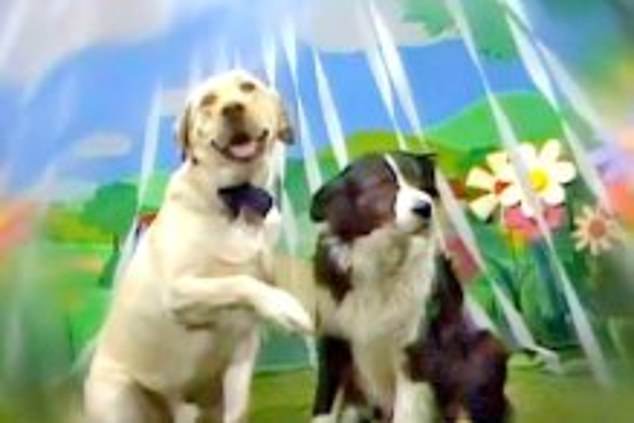 There was a bizarre episode with a sequence told from the point of view of Bouncer the Labrador, who had fallen in love with and wanted to marry Rosie, the collie next door

The early appeal of Neighbours was that, unlike Coronation Street and EastEnders, it shied away from relentless gloom, offering a feast of blue skies and good-looking people who sorted out their differences over a barbie and an ice-cold beer. But as it grew in popularity, the storylines became dafter.

Bouncer’s Dream was a particularly low point – a bizarre episode with a sequence told from the point of view of Bouncer the Labrador, who had fallen in love with and wanted to marry Rosie, the collie next door.

Harold Bishop, the Ramsay Street busybody, supposedly died at sea only to reappear five years later calling himself Ted and suffering from amnesia. But perhaps the most memorably awful episode came in 2002 featuring teacher Susan Kennedy.

When Susan slipped on some milk and banged her head, she woke up believing she was a 16-year-old schoolgirl.

Neighbours’ scandals weren’t limited to the screen. Last year the show launched an independent enquiry when a series of actors came forward to say they’d been subjected to racism on set by both cast and crew.

AboriginalAustralian star Shareena Clanton, who had a minor role in 2021, was first to make the claim. Meyne Wyatt, who played Nate Kinski, came forward to say he had suffered the same experience, as did current star Sharon Johal who, for four years, has played the part of Dipi Rebecchi.

British-born actress Nicola Charles, who played Sarah Beaumont, revealed that a producer had offered to pay for her to have a boob job and encouraged her to leak nude photos online to boost her profile.

And Scott McGregor, who played detective Mark Brennan for ten years until 2020, ended up giving evidence in court for real in 2019 after he was glassed by a dancer in a strip club who claimed he’d verbally abused her.

In 2007, in a £300 million deal, Neighbours was poached from the BBC by Channel 5, where it’s been broadcast ever since – until Friday’s three-episode finale. Channel 5 shouldered much of the production costs and has decided it would rather invest in home-grown dramas.

Without their money, the show’s production company Fremantle can’t afford to keep making it.

As for those final episodes, it’s no secret that some of the show’s biggest stars will make a return as friends old and new gather to celebrate Toadie and Melanie’s wedding. Guy Pearce revives his role as Mike Young and it’s not long before the sparks are flying when he’s reunited with his old crush Jane Harris.

‘I’m an incredibly nostalgic person anyway, so I’ve always wanted to step back onto the show at some stage, and with the sad news the show is finishing it seemed like the appropriate time,’ says Pearce.

‘There are certain moments in your life that are real markers. Being cast in Neighbours, the confidence it gave me and what I learnt being on the show, were immeasurable benefits.

‘I always feel super lucky to have got on the show when I did and as we know, it just took off.’

A LAST WORD FROM KYLIE

And how could Neighbours end without Charlene and Scott? They make the journey back to Erinsborough from Brisbane where they’ve been living happily ever after.

‘It was emotional going back to the set and felt beautiful, actually, the fact that we could see each other,’ says Kylie. ‘I haven’t seen some of these people in over 30 years.

‘And, you know, life passes by and we’ve all gone through different stuff. So just to be face-toface and say, ‘Wow, this is part of our history.’ It was great.’

Unlike some of its storylines, there will be no national amnesia once Neighbours is no more. It will always be remembered as a joyous dose of sunshine in our lives and – as the theme tune said – a good friend.