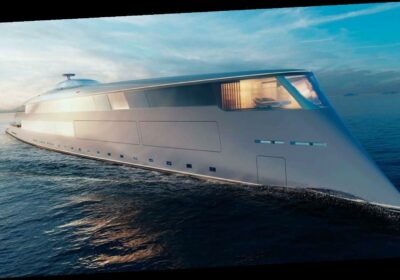 The world of super yachts is a world for the super rich. The Sinot Aqua, with a price tag exceeding half a billion dollars, takes that belief to a whole new level. The futuristic vessel is one that even those with money to burn can’t commission so easily.

The mystery surrounding the yacht’s owner is one that may take a few years to solve. While rumors have swirled about Microsoft mogul Bill Gates owning the Sinot Aqua, all the evidence appears to be circumstantial and even the creator, Sander Sinot, denies that Gates is the one who ordered its creation. Those eager to find out who the the eventual skipper will be may have to wait until the project is finished in 2024 to learn his or her identity.

In the meantime, some things are definitely known about this man-made Moby Dick. Without exaggeration, everything about it is impressive.

RELATED: 25 Yachts That Are Better Than Any Mansion

A nearly 400 foot master of the sea like this is guaranteed to carry a hefty pricetag and those who can afford such a monstrosity wouldn’t want it any other way. Clocking in at around $650,000,000, the Sinot Aqua’s costs don’t end with that initial payment. As with most mansions on water, the annual upkeep alone will cost more than most people will ever see in their back accounts.

The maintenance price of ships like this each year are estimated to be around 10% of their total cost, making the pricetag on this one’s upkeep a staggering $65 Million every 365 days. When you factor in that the 31 person staff could run up a price tag of $5 Million, it raises the price considerably. It’s no wonder that only the most elite are rumored to be in the running to captain its nautical adventures.

The Fuel of the Future

Sanders Sinot spent five years putting this project together and it’s obvious from the moment that you look under the proverbial hood. The money spent on stewards and upkeep will be easier to come by when you consider how much less it will cost to fuel a ship that runs on hydrogen rather than diesel.

That’s right. Sanders’s vision is equipped with two vacuum-sealed 28-ton tanks of hydrogen that are stored at -423 degrees, the temperature that the element needs to be stored at in order to function as a liquid.

Mixing function with aesthetics, both tanks will be viewable through a futuristic viewing area at the bottom of an enormous spiral staircase in the center of the ship. Combined with a backup diesel system, just in case, the Aqua will be able to travel at 17 knots and run for 3,750 nautical miles between fueling stops.

This zero emission option is huge for the environment and, with its probability for success, it’s already being viewed as an inspiration for yachts of the future. The only byproduct that the system leaves behind is water, making it both luxuruous and eco-conscious in a way that has never been seen before.

This super yacht is, in a word, beautiful. Designed to replicate the image of ocean swells, the sleek exterior looks like something from a 1900 sketchpad visualizing the boat of the future. The curved design harkens back to images of science fiction, but the visual aspect is just one of many that make it decadent beyond words.

With five decks, each more impressive then the one before it, those aboard will have no shortage of areas to rest their feet. There are spots to practice yoga and a massive cinema to view the latest and greatest movies available. From the 14 seat formal dining area to the elegant pool to the mammoth health and wellness center, everything about this ship screams luxury and, when it’s time to turn in, that approach is still prevalent. The aqua has a master pavillion, two VIP staterooms, and four regular staterooms.

Of course, whoever shells out the shells for this dreamboat deserves the best of the bunch and the owner’s suite is just that. Centered upon the upper deck, this area is an overall observatory that offers a complete 180 degree view of the entire vessel.

No super yacht would be complete without the option to explore the lands it travels to. The Sinot Aqua has room for two tender boats and three jet skis. It’s just one more perk of a floating vacation that would leave even the most decadent tastes satisfied. What else could you want? A helipad?

Because it has one of those. It has a helipad and even room for a passenger drone. The self-flying option that a drone presents eliminates the need to pay a pilot. Although, given the unbelievable taste of the high life that this ship offers, paying a helicopter pilot might not be a problem for whoever eventually lands this centerpiece for their ocean cavalry.