Why so many federal election memes are from The Simpsons 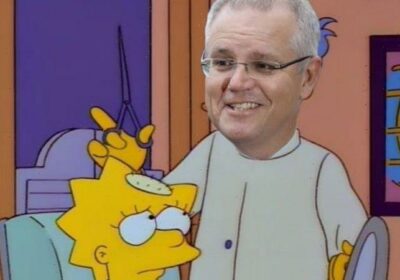 When Newcastle woman Chantelle Howlett took a selfie video with Scott Morrison and called him “the worst prime minister we’ve ever had”, the Labor Party TikTok edited her clip into a classic scene from The Simpsons.

It has since been viewed more than 370,000 times, making it the most popular post from any major party this election. 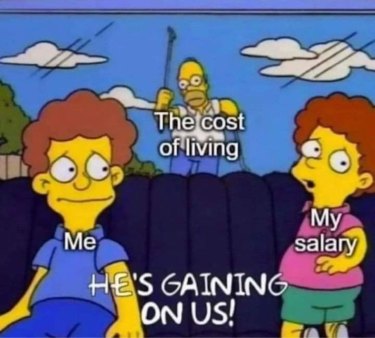 A cost of living post.Credit:Simpsons against the Liberals

The 2022 federal election, and arguably every Australian political contest since 2014, has been fuelled online by references to The Simpsons.

Every major protest including the NSW teachers’ strike, the women’s March4Justice, and the climate strikes, has featured satirical Simpsons posters.

The community-led ‘Simpsons against the Liberals’ Facebook page is one of the most popular political sites in the country with more than 168,000 followers. While it has fewer followers than the official Labor or Liberal pages, the average meme receives two to five times more engagement than either party’s most popular posts.

Despite the show’s left-wing bent, this popularity has prompted Liberal Party supporters to create their own Simpsons memes. The Young Liberal Movement of Australia Facebook page has been making its own memes from the show and posting them.

“We create all content in-house, we do not use community supplied content. Anthony Albanese and the Labor party are a rich source of inspiration,” the Coalition campaign HQ said in a statement.

So why has this American show become so prominent in Australian political discourse?

The Simpsons Against the Liberals page told The Sydney Morning Herald and The Age that they are most popular among 25-34 year olds. This demographic maintains an almost-religious devotion to the show. 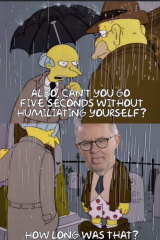 A post from the Young Liberals making fun of Albanese’s gaffe.Credit:Young Liberal Movement of Australia

From the 90s and into the late 2000s, Channel 10 would constantly rerun classic Simpsons, giving millennials a particular nostalgia and familiarity with the show.

“Back then, there were only a couple of TV channels,” the Simpsons Against the Liberals page said.

“The show has a much bigger cultural impact in Australia than it does in America, where it is from, as Americans had so many more TV channels to choose from.”

Brendan Dando, the Australian host of the world’s most-listened to Simpsons podcast Four Finger Discount said, “sitting in front of the TV at 6pm weeknights was a ritual for any Simpsons fan in the 90s.” 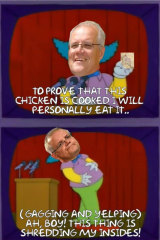 A post about Morrison’s recent curry mishap.Credit:Simpsons against the Liberals

“Australia has one of the world’s most dedicated Simpsons fan communities,” says Dando, “this love of the show has carried over into how we all express ourselves online.”

“I remember becoming obsessed with it as a kid, watching it on TV whenever I could, and arguing with my Dad because we only had one TV,” he said. “I was always known for Simpsons quotes, I just remember thinking it was the best show and I watched it over and over for years.”

The 25-34 age group dominates Facebook, which is widely used in Australian politics. This demographic has also grown up with the internet, and according to a 2016 study from Middlesex University, are the largest and most experienced users of social media. 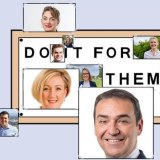 Simpsons Against the Libs was established the day after the 2014 Federal Budget.

“That budget was awful, and the page was made to make fun of the budget,” said Simpsons Against the Libs.

The page has become a prominent player in the Australian satirical space, even getting into an 11-hour comment war with Liberal MP Andrew Laming in 2016.

“What we love about the Simpsons against the Liberals is that it truly is a community – people get involved, they submit memes, encourage people to enrol to vote, our marriage equality campaign, fundraising, and so on.”

“We can thank Tony Abbott for this page.” 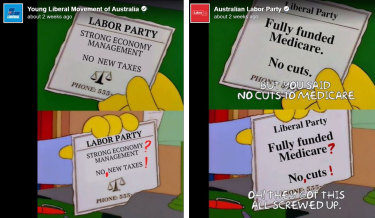 Dr Ariadna Matamoros Fernandez, a lecturer of digital media at QUT, says memes allow political parties to engage audiences that are difficult to reach through mainstream channels, and that the Simpsons is often used because of its broad appeal and recognisable style. “Even if you weren’t born at the peak of the show, you still know the characters and what they signify.”

An examination of the official federal Liberal pages shows the Coalition started publishing Simpsons memes this year. The Coalition campaign headquarters told The Sydney Morning Herald and The Age that they use The Simpsons formats simply because the show is popular.

“We create content for specific audiences, understanding that certain items appeal to different demographics,” they said, “The Simpsons is a show that has been popular for many years, therefore the content is applicable to a wider audience.”

Simpsons Against the Liberals believe they are at least partially responsible for the rise in political Simpsons content.

“We’ve noticed the Liberals have learned a thing or two from us and are using Simpsons memes more and more,” said Simpsons Against the Liberals. “But we did it first, and better!”