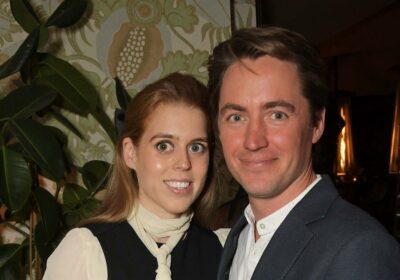 Princess Beatrice chose not to christen her two month old daughter Sienna with the sons of Princess Eugenie and Zara Tindall.

The Queen's granddaughter, 33, who recently stunned in silk skirt on night out with sister Princess Eugenie, 31, welcomed adorable Sienna Elizabeth in September alongside her husband Edoardo Mapelli Mozzi at the Chelsea and Westminster Hospital in London.

However Beatrice, who is 10th in line to the throne, did not christen her first-born daughter with her sister Eugenie's son August, nine months, and her cousin Zara's son Lucas, eight months, in a rare double christening on Sunday 21 November – the day after the 74th wedding anniversary of the Queen and her late husband Prince Philip.

The Queen attended the event at the Royal Chapel of All Saints in Windsor for her two great-grandsons and was pictured wearing a lime green outfit as she left in a car with her security.

While the official reason is not known, there are some potential explanations as to why Beatrice chose not to christen her baby girl alongside her sister and cousin Zara, 40, on Sunday.

The first possible reason could be the age of Sienna with parents Beatrice and Edoardo, who also shares five year old Christopher with Dara Huang, feeling that their little one was not ready for such occasion.

The new mum could also be following in the footsteps of her mother Sarah, Duchess of York, who christened Beatrice at four months old and Eugenie at nine months with both events taking place in December.

Meanwhile Princess Beatrice and Edoardo tied the knot in a small socially-distanced ceremony at The Royal Chapel of All Saints at Royal Lodge, Windsor, in July 2020.

The Queen and the late Prince Philip attended the nuptials but Beatrice and Edoardo has originally planned for a wedding on a larger scale.

This could mean that the parents have plans for a larger christening as they were unable to go ahead with their original wedding idea.

It comes after fans were quick to praise the royal cousins for the date they chose to have the christening and the way in which they paid tribute to their grandparents.

One wrote: “It’s so lovely that they not only they chose to have a double christening (so all the family will be together), but mostly that they chose the day of The Queen and Prince Philip’s wedding anniversary, the first that HM is without her husband.”

Another added: “Today is the first wedding anniversary the Queen will spend as a widow.

“I am glad she will be having a day of celebration with the christening of two babies who have been named after her late husband.”