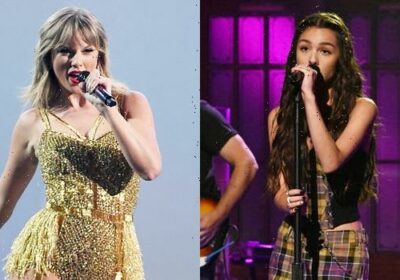 A viral TikTok presents evidence and ‘hidden messages’ to suggest Olivia Rodrigo could be following up ‘Sour’ with a second album soon. Here’s how this relates to Taylor Swift!

Fans are hoping that Olivia Rodrigo and Taylor Swift not only share the same talent for writing heartbreaking lyrics, but putting out music fast, too. T-Swift fans will recall that Taylor, 31, dropped her albums Folklore and Evermore within less than five months of one another in 2020, and a viral TikTok suggests that Olivia, 18, could be following the same fast trajectory after the pop industry’s newest alpha dropped Sour on May 21. The evidence stars with the name of Olivia’s album, Sour.

In the aforementioned TikTok, user @gibbybender shared a photo of Olivia biting into a bag of Sour Patch Kids, and then a box from Olivia’s collaboration with the candy brand. The TikTok proceeds to zoom in on the candy brand’s famous catchphrase — yes, you probably already know it — “Sour Then Sweet.” So, fans thought that the next album could be called “Sweet,” but they had more evidence than just candy.

“Why weren’t any of the love songs she wrote included on sour ??,” the TikTok user then wrote, and pulled up a screenshot of the unreleased songs listed on the Disney star’s Genius page. Many of these songs were written amid quarantine in 2020.

“But who would be crazy enough to release 2 albums in a short time and hide secret messages?,” the TikTok user added, and cut to a photo of Olivia and Taylor goofing around together (Olivia originally shared the picture on May 11). The TikTok user then showed what she meant by “secret messages” by pulling up a promo photo for Olivia’s music video Good 4 U. Olivia was standing by a locker with the number “514” marked on it, and a lock dial labeled with the number “6” — of course, fans couldn’t help but speculate if this was a teaser for a potential release date of new music.

This is a widespread theory, though, as you can see in the tweets above and below. It’s not a far-fetched idea to think that Taylor’s success would inspire the younger pop star — they’re already friends and collaborators! Taylor helped co-write the track “1 step forward, 3 steps back” along with Jack Antonoff on Olivia’s new album.

Fans also think that Olivia gave Taylor a subtle shout-out by wearing a cardigan while performing her hit song, “drivers license,” for the first time ever on TV on The Tonight Show Starring Jimmy Fallon (the biggest song off Taylor’s folklore album was “cardigan”). Then, in April, Olivia teamed up with fellow singer Conan Gray to help promote Taylor’s album Fearless (Taylor’s Version).

While fans eagerly await for another album, they’re still obsessing over the lyrics in Sour. One of the album’s songs, “traitor,” especially had fans wondering if they were inspired by Olivia’s High School Musical: The Musical: The Series co-star Joshua Bassett!