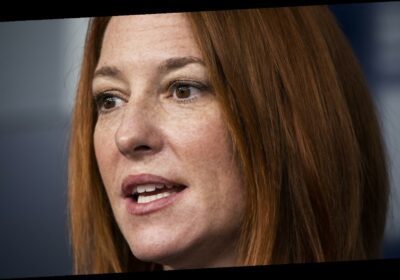 Jen Psaki is President Joe Biden’s White House press secretary, and she has reinstated daily press briefings at the White House, a tradition that many of Trump’s press secretaries eschewed. Many are fans of what they see as a return to normalcy from the press office with Psaki’s briefings, and some have compared her to Scandal character Abby Whelan, played by Darby Stanchfield because the two are both redheads (per Insider). But it turns out that Psaki may need her own Olivia Pope Scandal-worthy spin on something Pskai tweeted last year.

She wrote, “only in 2020 does #LadyG get to push a bunch of debunked conspiracy theories while questioning @SallyQYates (aka an American hero).”

The tweet in question came in while the Senate Judiciary Committee was questioning Sally Yates, the former deputy U.S. attorney general, about what she and others in the Justice Department did about allegations of 2016 election interference by Russia. Seems like Psaki wasn’t too happy with the line of questioning. And if you are in the know on hashtags, and with the timing of the tweet, you know that #LadyG is a derogatory reference to Sen. Lindsey Graham.

Psaki's use of the hashtag is being called offensive

That hashtag came about after gay adult-film star Sean Harding tweeted, “There is a homophobic republican senator who is no better than Trump who keeps passing legislation that is damaging to the lgbt and minority communities. Every sex worker I know has been hired by this man. Wondering if enough of us spoke out if that could get him out of office?” And he followed up with “I cannot do this alone. If you’d be willing to stand with me against LG please let me know.” Shortly after that #LadyGraham and #LadyG picked up speed on Twitter (via The Washington Post).

Use of that hashtag by Jen Psaki is being called out as discriminatory, and it’s getting lots of attention and replies six months after it was originally posted. One user wrote, “Wow. I thought the Biden admin was an ally? This sounds horribly damaging to the fragile mental health of someone by outing them. Even if he’s not supportive… take the high road and don’t make things worse. This is horrible. Take it down and publicly apologize.” Another tweeted, “Hey, let’s not do internalized homophobia in high positions of power and illegally confirm judges that will rollback lgbtq protections, which would disproportionately harm LGBTQ youth of color.”

A spokesperson for Graham, who is unmarried, which has helped fuel rumors against him, commented on the tweet: “Very disappointed someone in her position would embrace this style politics. It says more about her than it does about Senator Graham” (via the Daily Mail).