Home » Lifestyle » Why I’m encouraging my daughter to wag school

Why I’m encouraging my daughter to wag school It’s not that I don’t value her education. I absolutely do. It’s just that on Friday 15 March I think she’s likely to learn more outside the classroom than in it. 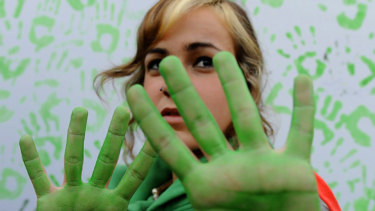 A woman shows her green painted hands during a protest on the global day of actions against climate change. This week students in 50 countries will leave the classroom to protest climate change.Credit:AFP

She’ll be joining students in over 50 countries, and 40 separate locations around Australia, for the School Strike 4 Climate rally.

Some might say that nine is too young for a child to be involved in politics. In an ideal world, they may well be right.

But we don’t live in an ideal world.

My daughter sweated through the hottest summer on record just like the rest of us and heard about the catastrophic bushfires and floods. She’s old enough to understand the news that tells her the climate is change at unprecedented pace.

And unlike an alarming number of our politicians, including our Prime Minister who claims to love coal so much he brought a lump of it into parliament, my daughter believes in science and knows full well that climate change is an existential threat.

She’s also old enough to understand that while fossil fuel emissions are something that the mums and dads can fix, the fact is we haven’t. And she knows that her generation will suffer the consequences.

Given all of this, I cannot with good conscience tell my daughter that climate change is a grown-up problem that she doesn’t have to worry about.

This combination of doom and hopelessness could be crushing for a child. She could feel hopeless or powerless.

But there is an alternative. It’s getting off the couch and out of our comfort zones and actually doing something, fighting for what matters to us.

But the lesson for my daughter goes beyond climate change. I want her to understand that not only does she have the power to make change in the world, but also the obligation to fight for a more just world and a better future.

In an increasingly atomised and individualistic society I want her to experience the power, the energy and the hope of collective action. Standing shoulder to shoulder with her peers, through teamwork, compromise and passion, she does have a voice, and she can speak and demand to be heard.

I also want my daughter to look up at the young women holding microphones and megaphones, doing media interviews and eyeballing politicians and see a version of young female leadership that does not hinge on selfies or a sex tape.

We fret and tut that the young women of today are vacuous and self-absorbed. What better way to encourage our girls to be more than that than to show them an alternative?

The young people – predominantly young women – who organised School Strike 4 Climate demonstrate the qualities that we should all be encouraging in our children: drive, courage, empathy and persuasion.

Responding to the last climate strike, Prime Minister Scott Morrison said, “What we want is more learning in schools and less activism in schools”. The dog whistle was pitched perfectly, but like most of the recent attacks by a government that seems more intent on crafting scare campaigns than actually governing, the electorate wasn’t interested.

The kids behind Strike 4 Climate Change are demonstrating how leadership is done, through collective will, rather than hollow sloganeering, folksy tweets and cheap shots. And sometimes, the street is the best classroom.

If our kids are going save us from ourselves then carrying their signs and water bottles for a couple of hours and writing an absentee note for school is the least we can do.