Home » Lifestyle » Who'll find love on our virtual date? This week it's Andrew and Luke

Who'll find love on our virtual date? This week it's Andrew and Luke Who’ll find love on our virtual date? This week it’s Andrew, 43, and Luke, 33, but will romance be on the cards? 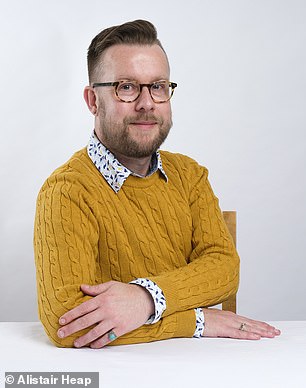 Andrew, 43, (pictured) who has been single for seven years, is a postgraduate student

I’ve been in two long-term relationships; one for a year and another for seven, but each just ran its course. In the two years since I’ve been on a lot of dates.

Fifteen minutes before the date, I suddenly got nervous about how it would go. This is my first virtual date, but I’ve been on a blind date before and it was a disaster.

Someone who has a daft sense of humour. I’m a supportive partner, to the point that my friends all call me Mother Goose.

Luke is a handsome lad with nice eyes, long lashes and a rather big beard. I was touched that he had bought me flowers and had them next to him during the date. He was concerned it would be cheesy, but I like cheesy! I felt self-conscious because I was wearing a hoodie and a T-shirt, while Luke looked good in an oriental-print shirt.

Easy To Talk To?

He’s younger than me, but has done so much with his life, which is a big tick. He teaches special needs children and is a vegan — another tick as I’m a vegetarian.

It’s good to meet someone who has a strong moral compass but isn’t preachy or judgy. I explained I had gone back to university and showed him some of my paintings — but not in a ‘look how clever I am’ way. Luke was curious and seemed impressed.

As the date went on, increasingly I felt like a bit of an old fart because Luke is clearly cool.

He goes out a lot and I don’t. Am I a fuddy-duddy? It’s possible . . . the highlight of my weekend is listening to The Archers omnibus.

LIKED? Luke is very nice to look at.

SEE HIM AGAIN?  Yes I would.

It’s difficult to tell on a virtual date, and I’m not good at picking up signals. I am attracted to him, though — there, I said it!

It was stilted at times because of the internet connection — Luke was using his mobile phone and it kept stalling — but we stayed online for three hours.

Yes, and we have been in touch since the date. However, I don’t want to intrude at the moment as Luke’s sister is expecting a baby any day now and they’re close. I’m taking it as a positive sign that Luke suggested we exchange numbers.

What do you think he thought of you?

I hope he thought I was attractive and funny.

They might question his long hair, which he ties in a man bun, but my friends are extremely welcoming so yes, I suspect they would.

For the past couple of years I’ve been working in Sierra Leone teaching English. I returned to the UK before lockdown, and now I’m thinking about dating for the first time in ages. I’ve had one serious relationship in the past.

A positive person who is kind and funny and who will make me smile. I would run a mile from a negative narcissist.

SEE HIM AGAIN?  Yes, but as friends.

I was excited. I liked the prospect of meeting someone in this way.

There were a couple of technical glitches, but that was good because it meant I got to see Andrew before he saw me. Although he seemed nice, I wasn’t physically attracted to him at first glance. I prefer tall, dark, handsome guys who are a bit rough around the edges.

I’d bought roses for Andrew. My sister thought it was corny but I thought it was a win-win — a nice gesture and I got to keep them. I think he found it odd but sweet.

Easy To Talk To?

I fear I led the conversation — I’m possibly more outgoing — but loved it when Andrew showed me his artwork, including a painting of The Addams Family. Fortunately I didn’t have to pretend it was good, it’s clear he’s talented.

I didn’t plan on eating on camera as I thought it might feel odd. But Andrew chose to dig in and I was glad, as that made me do so too. I had a vitamin C drink while he enjoyed a bottle of wine. I think we balanced each other out.

We were both very polite, so it was a bit formal and felt like a job interview at times. I realised early on that Andrew wasn’t someone to whom I was romantically attracted, but it was really nice to spend time getting to know each other.

As friends. I have so much respect for Andrew as he left a career he didn’t enjoy to pursue his passion for illustration. I asked if he wanted to exchange numbers and we have been in touch since.

What do you think he thought of you?

Hopefully that I’m funny. He might think I talked too much; if there were any awkward pauses, I jumped straight in. I don’t know if he was interested in me.

They’d be surprised because he isn’t my usual type, but they’d like him. There is nothing to dislike.

Would you like us to find you a date ? Fancy a date with an eligible single like you?

Or would you like to play cupid for someone else? Email your — or their — details and a photo to [email protected] dailymail.co.uk