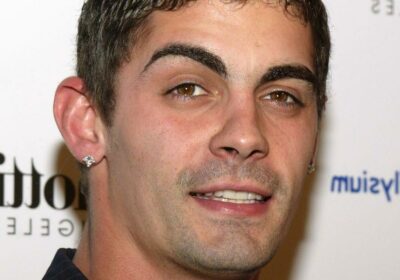 Britney Spears and Sam Asghari have finallytied the knot after six years of dating.

The 40 year old singergot engaged to Sam, 28, in September 2021 and exchanged views during an intimate ceremony in Los Angeles.

However, just hours before her wedding, the Circus hitmaker’s ex-husband Jason Alexander, 40,turned up to her home and went live on Instagram where he said he was there to “crash” the wedding.

But who is Jason and when was he married to the popstar? Let’s take a look…

Jason and Britney were childhood friends and knew each other after growing up in Kentwood, Louisiana, together.

The couple briefly became husband and wife when they were both 22 years old.

The pair were married for less than three days after they tied the knot in January 2004 in Las Vegas in the early hours of the morning.

However, their marriage was annulled after just 55 hours after the annulment statement filed by the singer’s lawyer said that Britney “lacked understanding of her actions, to the extent that she was incapable of agreeing to the marriage.”

Speaking toAccess Hollywood at the time, Jason called the marriage a “crazy” experience.

“It was just crazy, man. And we were just looking at each other and said, 'Let’s do something wild, crazy. Let’s go get married, just for the hell of it,” he said.

Retired divorce attorney Mark Goldberg gave further insight into the wedding during an interview with theDaily Mail in 2021.

“As I remember it, it was Britney's idea to get married. He said they hadn't been drinking or doing drugs – or at least they weren't drunk.”

And during an appearance on the Toxic: The Britney Spears Story podcast in 2021, Jason claimed that Britney’s team told him that he could continue with his relationship as long as he agreed to the annulment.

Do you love celebrities, fashion, home interiors and beauty? Then do not waste another minute of your time and sign up to our daily newsletter, where you will receive all that – and more – straight to your inbox at 5pm every day.

From exclusive at home tours, cleaning hacks, the latest in beauty trends – and of course, all the latest celebrity gossip, look no further.

Pop your email address in the box at the top of this article, and et voila! Enjoy

“They told me if I would sign the contracts – the annulment – they would let me and Britney continue our relationship, and if we felt the same way in six months they would give us a proper marriage,” he alleged.

“So I had no reason to believe otherwise. I thought that's what the truth was. They were allowing Britney and I to still have phone communication.

“So we were talking every day and I still believed the story I was told, that they were going to let us continue to talk and then we would have this marriage, right, in the future if we felt the same way.”

But shortly after the two called time on their marriage, Britney began dating backup dancer Kevin Federline and the pair married in a secret ceremony in September 2004.

Together the couple share sons Sean Preston and Jayden, whom they co parent after splitting in November 2006.

Despite going their separate ways, Jason was spotted at a#FreeBritney protest in LA in 2020 and has previously opened up about his “love” for his former flame.

“We never were given a shot the first time around. If there's feeling still there, maybe we see where they go but that's not – you know that's on her.”

For all the latest lifestyle news, sign up to our daily newsletter here.