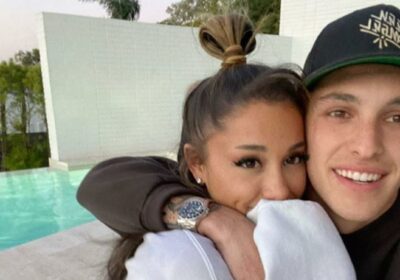 Ariana Grande and Dalton Gomez have made it official as husband and wife. The couple wed secretly with a small ceremony in May 2021.

“They got married,” Ariana’s rep confirmed to People. “It was tiny and intimate — less than 20 people. The room was so happy and full of love. The couple and both families couldn’t be happier.”

The couple have been dating since January 2020, per People, so basically 10 years in celeb romance timing. However, they’ve kept details about their ‘ship pretty private throughout their courtship. That leaves lots of questions about who the “Stuck With U” singer is cozying up to these days. It’s high time you got to know Ariana Grande’s husband Dalton Gomez:

Dalton and Ariana have been keeping their relationship private.

The fun details, like how they met (was it real estate love at first sight?) and fell for each other, are still under wraps. They were spotted kissing in a bar in Northridge, CA, in February, per TMZ. Dalton was dubbed a “mystery man” and then later identified by TMZ.

Four months later, they just became Instagram official when Ariana shared a gallery of cute pictures, including one of them cuddled close together.

The couple moved in together in LA in summer 2020.

An insider shared the scoop. “Ariana is staying at home with friends,” the source told People. “She is very serious about self-distancing and has been with the same group of people for days. One of the people she is with right now is Dalton—they have been hanging out for a couple of months. Ariana doesn’t want to do another public relationship so she is trying to keep this one quiet, but she seems very happy with Dalton.”

Then, Ariana bought her own Hollywood home. “It was getting tricky for them to see each other, so she decided to take her chance,” a source told People. “She purchased a house in the Hollywood Hills in June and never looked back. They are incredibly happy.”

Dalton popped the question in December 2020.

Ariana said yes and debuted a serious sparkler on Instagram to announce their engagement. “forever n then some,” she captioned the post.

And, Ariana’s family gets along well with Dalton.

Ariana isn’t the only one singing his praises. “Ari’s family is very happy. Everyone loves Dalton. He is great for Ari,” an insider told People when the couple got engaged. “This phase of her life has been very quiet and uneventful in a good way. They are very happy that she is marrying Dalton.”

Meanwhile, Ariana has shared a handful of adorable photos cuddled up with Dalton. “!!! my heart my person !!! thank u so much for being u,” she captioned one sweet series.

He works as the sole buyer’s agent for the high-end real estate company, Aaron Kirman Group. (Think a la the cast of Netflix’s Selling Sunset.) He closes high-profile deals with A-list clients, but you’d be hard-pressed to find out exactly who he reps.

Dalton is selling one of snowboarder Shaun White’s homes.

Dalton has one mega listing he’s working on: selling Shaun White’s Malibu beach house, per The Manual. The modern three-bedroom home is located on a bluff in the heart of Malibu. It’s listed for $8.995 million, nbd.

Dalton knows the SoCal housing market well—he grew up in the area, after all. It seems to have paid off. He has one of the largest rolodexes of A-list buyers and is already connecting many high-profile deals across LA, according to his Aaron Kirman bio. “Highly sought after for his extensive knowledge in the fields of significant architecture and luxury estates, he is quickly becoming an industry titan,” the bio reads.

Dalton made a cameo in Ariana’s song “Stuck With U.”

Prior to Ariana’s big Insta reveal, she confirmed their relationship via her music video. The new, stay-at-home-inspired duet with Justin Bieber showed a glimpse into her own quarantine companion. Near the end of the clip, Ariana and Dalton hug and dance together. Cue the awww!

But, you won’t see him on Listing Impossible.

Unlike his colleagues and the namesake founder Aaron Kirman at the luxury real estate brokerage, Dalton is not on the cast for the CNBC show.

Beyond that, Dalton remains largely a mystery man.

His Instagram account is currently set to private. He also gives no additional info away in his bio—it’s all purely professional.