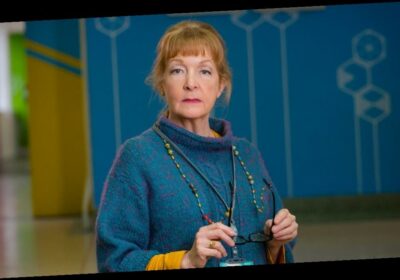 She played Val Pollard in Emmerdale for 11 years and was written out of the soap when a helicopter crashed into the village.

And actress Charlie Hardwick, 60, is still a TV favourite after she returned to our screens in 2019 playing Sue Carp in the Channel 4 comedy-drama Ackley Bridge.

Eagle-eyed viewers were quick to spot Charlie in her new role as director of pupil behaviour playing Sue where she starred alongside Downton Abbey actor Rob James-Collier.

The series, which first aired in 2017, is set in the fictional Yorkshire mill town of Ackley Bridge and follows the lives of pupils and staff who are affected by the merger of two schools from British and Asian communities.

Charlie joined the cast in series three as Sue Carp who was not happy about the transfer to Ackley Bridge and did not care about her role even though she was part of senior management.

Her character was found sleeping at her desk and told colleagues she was only working there until she was able to retire.

The actress left Emmerdale in 2015 after she first joined the ITV soap in 2004 as Val Lambert – the sister of Diane Sugden.

Speaking about her departure on Loose Women in 2016, she said: “I’d like to thank all the people who watch Emmerdale who have been so lovely to me over the years and who have enjoyed the ups and downs of Eric and Val.

“I thought, let’s have a chance at another chapter in my life, you know just when it’s time to go.”

Since leaving, Val made several appearances in Emmerdale as a ghost to husband Eric Pollard and in Robert Sugden’s dream on the Christmas episode in 2017.

Following her Emmerdale career, Charlie also starred in roles on stage including Clear White Light at Live Theatre in Newcastle in the role of Maddie.