Home » Lifestyle » What Are Fizzle Rocks? ‘Riverdale’s Scary New Drug Is Connected To The Gargoyle King

What Are Fizzle Rocks? ‘Riverdale’s Scary New Drug Is Connected To The Gargoyle King If you thought Jingle Jangle was a bad enough name for a hard drug, then get ready for Fizzle Rocks. Riverdale introduced another one of its cutesy-sounding drugs on this week’s new episode, and although Fizzle Rocks may sound harmless, they may actually hold be the key to unlocking this whole Gargoyle King mystery once and for all. So what are Fizzle Rocks exactly, and how are they connected to they Gargoyle King? Let’s break down all the important new information that we got from Riverdale‘s latest episode.

Spoiler alert: This post includes details from Riverdale Season 3 Episode 7, "The Man in Black." All of the major new revelations that Wednesday night’s new episode of Riverdale gave us revolve around Fizzle Rocks, the strange new drug that is somehow connected to Gryphons and Gargoyles. We first heard about Fizzle Rocks a couple episodes ago when Alice Cooper was telling Betty about the Midnight Club, her group with the rest of the town’s parents that met up to play Gryphons and Gargoyles back when they were in high school. Alice mentioned that Hiram Lodge gave everyone Fizzle Rocks on the night that they saw the Gargoyle King and Principal Featherhead wound up dead. 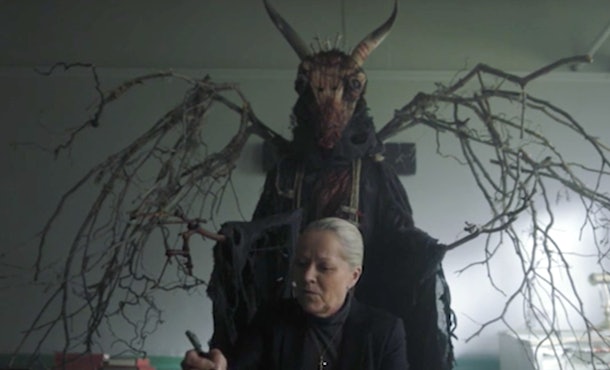 So what could really be going on with Fizzle Rocks? Well, the old woman from Athens confirms that the candy is indeed laced with drugs, and we also find out that Hiram Lodge plans to use the prison he’s constructing as a front to manufacture and sell Fizzle Rocks, so he is somehow involved in all of this as well.

Most importantly, it seems that Fizzle Rocks are somehow required to make Gryphons and Gargoyles players subservient to the Gargoyle King. After Betty eats the Fizzle Rocks and emerges from the Gargoyle King’s chamber, she appears to have a total change of heart about the mysterious beast. Since Fizzle Rocks are the key to the Gargoyle King’s power, then he must have some sort of relationship with Hiram Lodge, who is gunning to mass-produce a whole lot more of the drug. In the Season 2 finale, we saw that Hiram was working with Claudius Blossom, Penelope Blossom, Penny Peabody, and the Ghoulies to build his prison/drug empire. Could one of Hiram’s shady business partners be the Gargoyle King? Betty did notice Claudius Blossom at the Sisters of Quiet Mercy seemingly for no reason…

Hopefully we will get a clearer explanation about the connection between Fizzle Rocks and the Gargoyle King when Riverdale airs its midseason finale next week on Wednesday, Dec. 12.