But the package of measures unveiled by the Reserve Bank on Tuesday to safeguard the Australian economy is as close as governor Philip Lowe will go to channelling his inner gladiator. 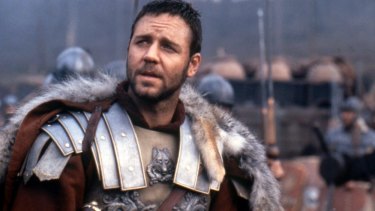 The Reserve Bank has channelled Gladiator Russell Crowe, throwing everything it can at supporting the Australian economy.Credit:Reuters

The cash rate taken to (another) record low. Banks that leave money with the RBA overnight getting zero interest. The creation of $100 billion to buy federal and state government debt to help drive down the interest rate on those bonds. And an interest rate of just 0.1 per cent on the $200 billion offered to banks to on-lend to small and medium sized businesses.

In central banker terms, it's bigger and more pervasive than Crowe's military assault.

Yet matched against the economic forecasts, which suggests inflation well short of the RBA's own target band and a jobless rate of 6 per cent at the end of 2022, the bank is a long way from declaring victory.

While saying he is optimistic about the future, Dr Lowe conceded the Reserve won't be lifting official interest rates over the next three years.

"I certainly hope that the economy will be sufficiently strong sometime over the next 5 years to warrant an increase in the cash rate," he mused.

Like our political leaders, the Reserve Bank is ultimately beholden to a medical breakthrough to resolve the coronavirus recession. The events playing out in Europe and across the United States is evidence enough that without a vaccine there is no economic salvation.

But the RBA now finds itself partly hamstrung by issues outside of its control.

The first is the RBA was forced into taking official interest rates down to a (then) record low of 0.75 per cent late last year as it sought to get the economy growing fast enough to reduce under-employment, grow wages and lift inflation.

That meant it did not have as much room to move when the coronavirus hit.

Another issue is a byproduct of the success in controlling the pandemic within Australia's borders. While the northern hemisphere is struggling with a deadly second wave of the coronavirus, here in Australia (and in New Zealand), as Melbourne emerges from severe restrictions and domestic borders reopen, life is almost normal.

Yet that normality is an illusion. The closure of key overseas markets coupled with a sharp slowdown in population growth means the economic headwinds are still blowing into our faces. We just haven't noticed it, yet.

A final wrinkle is government spending. Over the next three years, the Morrison government is expecting to tighten fiscal policy, from a deficit of $213.7 billion this year to a deficit of $66.9 billion.

That's a massive reduction in government support that no one really knows how will play out.

Based on the RBA's own forecasts, it will have gone at least 13 years between increases in interest rates. The last time rates were increased, Julia Gillard was Prime Minister, Americain won the Melbourne Cup and Barack Obama was in his first term as US president.

The battle against the coronavirus recession is far from over.