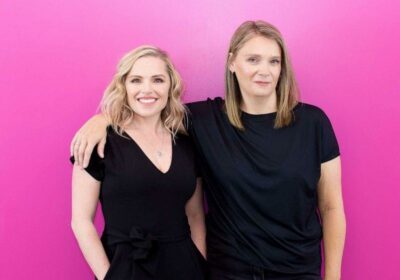 Two New York City women are highlighting, celebrating and normalizing LGBTQ families through their podcast “If These Ovaries Could Talk.”

Jaimie Kelton, 43, and Robin Hopkins, 50 have been friends for seven years. Both are lesbians and mothers of two children with their respective partners.

In 2017, when Kelton and her partner were looking to have a second child, she began struggling with fertility issues. And like many who have, Kelton felt down and lonely about the process, and sought comfort in finding stories like her own.

Months later, Kelton ran into Hopkins and approached her about making a podcast that told the stories of lesbian families similar to each of theirs. The next day the two friends met for lunch and Iaid down the basics for their new show. In 2018, “If These Ovaries Could Talk” was born.

“We thought it was just going to be one season and we would just be interviewing our friends,” Kelton said. “I thought this would be a fun little side hobby.”

Three years later, Kelton and Hopkins have recorded over 125 episodes and interviewed celebrities like Rosie O’Donnell and Shaun T. They’ve also expanded from telling the stories of their friend group of lesbian families to learning about all sorts of different types of families in the LGBTQ community.

Dad's video in support of his son for Pride goes viral

“The stories are never, ever, ever the same. Because it’s about the personal journey and what you’re overcoming to get there and the odds of what you have to fight through,” Hopkins said. “Because it’s not easy to make our families. There is no way to make an LGBTQ family without either help from another person or paying. And we knew that around that is the heart of the stories.”

“There are no accidental pregnancies in our community, every single child is very wanted, very intended,” Kelton added. “Everybody who comes on our podcast has worked really hard to make their families happen. … That’s where the beauty of it is.”

Kelton and Hopkins said they’ve both learned so much about the “vast and evolving” LGBTQ community through their interviews and hope that their podcast can help educate others about their community as well.

“That’s one of the main missions of the podcast — to celebrate our families and to highlight them, because representation matters,” Hopkins said.

“There are no accidental pregnancies in our community, every single child is very wanted, very intended.”

While helping educate others on the different types of LGBTQ families, the podcast hosts said they’ve also educated many in the LGBTQ community who are looking to start families but weren’t sure where to begin.

“There are people that will say, like, ‘I just knew I wanted to have the baby, and I didn’t know how to go about it. I found your podcast, and you’ve been with us the whole time,'” Hopkins said. “They call their babies ‘Ovaries Talk’ babies. … The community that has been built is so wonderful.”

Kelton and Hopkins have released a book titled “If These Ovaries Could Talk” that further highlights themes and stories from the podcast.

“It’s such a great ally book because it’s perfect for anyone who doesn’t understand or doesn’t know. So you know, you’ve maybe you’re an LGBTQ person, you’re going to give it to your parents to help them understand,” Hopkins said. “But it’s also great if you just want to see more like you and hear more stories like yours.”

“We’re highlighting, we’re celebrating, but at the same time just normalizing,” Kelton said. “We’re just like everybody else.”