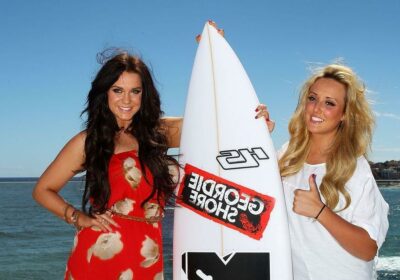 We're used to watching them on our television screens and are quick to presume they all get on away from the cameras, but for many TV stars that's not the case.

From reality TV stars to soap actors, there's a number of famous faces who secretly don't get along, with some feuds even playing out in public.

TOWIE stars Chloe Brockett and Ella Rae Wise's fiery feud has played out on-screen, while Geordie Shore's Charlotte Crosby and Vicky Pattison kept their rift under wraps during their time on the MTV show.

Rumours of a feud between Charlotte, 32, and Vicky, 34, have been rife for years, and mum-to-be Charlotte recently opened up about her friendship with her former Geordie Shore co-star.

Charlotte explained that she and Vicky had never really fell out but were never much more than just work friends.

"We were never really friends in the first place… I don’t think we were, we were probably just workmates. There wasn’t really a fallout, but she just moved on and we went our separate ways. We haven’t spoken," she told The Sun.

Gregg, 57, and John, also 57, have been working together for nearly 20 years and have known each other since 1991, but their friendship tends to stay in the work place.

MasterChef judge John previously revealed: "It's well documented that we don't socialise outside of work. We've never been to each other's houses. We've never really cooked for each other.

"We spend a lot of time together, sharing a lot of things: emotion, food, pressure and changing people's lives. 17 years on, it's still a relationship that is calm and in good stead. I think it's an amazing thing."

There's also been drama among the cast ofCoronation Street, with former soap star John Thomson taking to Twitter in the past to air his opinions about Antony Cotton.
John, 53, portrayed Jesse Chadwick on the ITV soap for two years and it appears that he didn't get on well Antony, 47, who plays Sean Tully.
While Antony was in the I'm A Celebrity…Get Me Out Of Here! jungle back in 2011, John tweeted: "Antony Cotton – the truth will out. You nasty piece of work, you are doing yourself no favours."

He also branded him "Trouble with a capital" when asked about working with Antony, according to Digital Spy.

Antony never responded to his former co-stars harsh remarks, but fellow Corrie star Kym Marsh defended him in an interview with new magazine.

She said: "I was surprised that ex-Corrie star and actor John Thomson felt the need to say on Twitter that Antony was a 'nasty piece of work'. Not only is it unprofessional, it's also untrue – Antony hasn't got a nasty bone in his body."

It's no secret that many The Only Way Is Essex stars don't get along with each other, but Chloe Brockett and Ella Rae Wise's feud has continued away from the cameras.

Chloe, 21, and Ella, 22, were reportedly involved in a nightclub 'brawl' back in April, with Chloe allegedly throwing an ice bucket at Ella, but hitting a different person.

The pair joined the ITVBe show three years ago and were originally pals, but their friendship was short-lived and they've continued to argue ever since.

There was always drama on The X Factor whether it be between the judges or the contestants, and in 2007 Sharon Osbourne and Dannii Minogue came to blows.

Writing in her autobiography Unbreakable, Sharon, 69, said she found the time she spent with Dannii, 50, an "odious chore".

Sharon and Dannii weren't the only X Factor judges to find themselves embroiled in a feud, as Louis and Cheryl also exchanged harsh words more than once during their time on the ITV show together.

Louis, 70, fell out with Girls Aloud when he labelled them fat, and in 2010 he took a swipe at Cheryl, 39, and accused her of thinking the X Factor was "her show" before mocking her on-screen for looking orange.

There's been numerous rumours of rifts among the Loose Women, with many publicly denying that any of the panellists don't get along.

In 2012, reports claiming that Denise Welch, 64, had refused to appear on the ITV show alongside Janet Street-Porter, 75, started circulating.

The pair have clashed on-screen on several occasions, but Denise did deny that she has an issue with any of her Loose Women co-stars.

"I have never once had an argument with any single girl off stage in that show in 20 years. Never once. Me and Carol McGiffin can go and it hammer and tongs.

"Me and Kaye Adams, every single time we say something, in the break we look at each other and go 'oh that'll be the headline. Fiery clash on Loose Women.' All the time. In a way that's part of the show," she previously said.