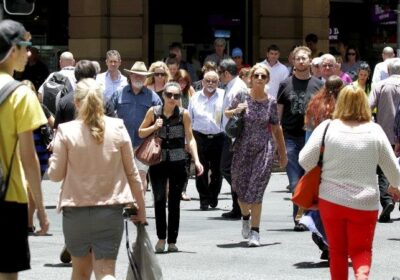 The pandemic’s devastation of the nation’s finances will be laid bare along with past policy mistakes in next month’s delayed intergenerational report, revealing huge levels of debt over the next 40 years, a less productive economy and a smaller, older population.

Amid warnings it will be a wake-up call for both sides of politics, the next intergenerational report from the federal government will also have to correct issues created by the last report, carried out by then treasurer Joe Hockey, and account for a ramp-up in spending in areas such as aged care and health. 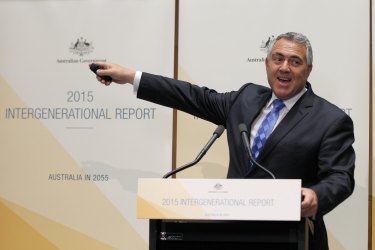 Joe Hockey releasing the 2015 intergenerational report. The next report, to be released in June, will show a huge deterioration in the nation’s finances and a smaller, older Australia.Credit:Alex Ellinghausen

The report, started by Peter Costello when he was treasurer, is aimed at measuring the long-term sustainability of government policies and how changes to the population and productivity levels affect the budget bottom line.

Due last year, the latest report was delayed because of the pandemic.

Mr Hockey’s 2015 report came under fire due to some of its optimistic assumptions, such as the inclusion of government policies that were never implemented because of voter backlash. It also sought to compare policies of the Rudd government with the Abbott government’s 2014 budget plans.

Productivity growth was forecast to average 1.5 per cent, the nation’s population was tipped to reach 39.7 million and the fertility rate was predicted to stay at 1.9 children per woman.

While projecting the state of the budget over 40 years, the report gave specific projections for particular years including 2024-25, which entered the budget forecasts for the first time this month.

Those forecasts show Mr Hockey’s projections are already behind expectations. Spending on health and education are well above what was forecast, there are likely to be 1.3 million fewer Australians, and instead of a budget surplus of about $19 billion the government has predicted a deficit of $57 billion.

Childcare support was expected to cost the government about 0.4 per cent of GDP while support for the unemployed was supposed to edge down to 0.6 per cent. Both increased in the latest budget. 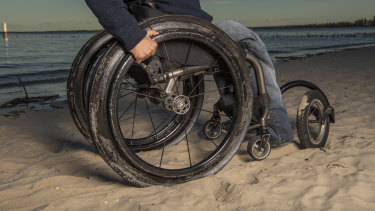 The cost of the NDIS is already running ahead of what the 2015 intergenerational report forecast.Credit:Louise Kennerley

The National Disability Insurance Scheme was supposed to cost 0.7 per cent of GDP in 2024-25 but the May budget showed it on track to double that.

Mr Hockey’s report expected reviews of the tax system and the federation to deliver major productivity improvements. Both reviews were abandoned.

While the 2015 report expected gross debt to be falling due to sizeable surpluses, Treasurer Josh Frydenberg’s budget forecasts deficits into the 2030s with gross debt hitting a record $1.2 trillion.

Pressed last week on how the government would pay for the debt and deficit run up dealing with the pandemic, Prime Minister Scott Morrison said “a strong economy”.

“A strong economy is what pays for social services, not higher taxes,” he said.

This month’s budget shows deficits every year for the next decade and a slowdown in economic growth from 2022-23.

Stephen Anthony, who worked on the first intergenerational report and is now chief economist for economic and finance modelling advisory Macroeconomics, said this year’s report would show how much damage had been done to the budget.

He said extra spending in areas such as aged care, defence and the NDIS had not been offset by reductions elsewhere. 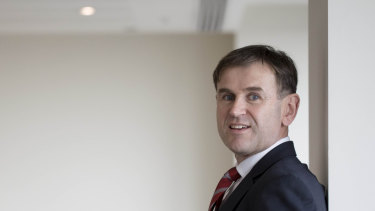 Macroeconomics chief economist Stephen Anthony says the next intergenerational report will be a wake-up call for both sides of politics and voters.Credit:Arsineh Houspian

“This is going to be a real wake-up call to both sides of politics and to voters just how much trouble the budget is in,” he said.

Former NSW Treasury secretary Percy Allan said the government was expecting a surge in consumer confidence to kickstart business investment while keeping a lid on spending over the next decade that would be accompanied by record low interest rates.

He said just one cog in this wheel had to fail for the whole budget to implode.

“A more realistic view is that for Australia to restore fiscal discipline it has to make a choice – remain one of the developed world’s lowest tax-to-GDP jurisdictions with deficient essential services or join those OECD countries that have generous public services but pay higher taxes. Unfortunately, neither side of politics wants to acknowledge that trade-off,” he said.

Apart from spending, the nation’s finances have been harmed by poor productivity growth, which is running almost a third less than the 1.5 per cent that has underpinned previous intergenerational forecasts.

Next month’s report will predict an 11 per cent reduction in expected female fertility. That alone could reduce the size of the forecast national workforce in 2055 by more than 620,000 people.

The lower fertility rate, coupled with the hit to migration caused by the pandemic, will leave the country with a smaller and older population, which in turn pushes up spending in areas such as aged care and the aged pension.

There may be up to 5 million fewer people in the country than had been expected in the last report with more than one in five of those aged at least 65.

Last week, Treasury secretary Stephen Kennedy said while an aggressive tightening of fiscal policy now would risk long-lasting economic impacts, eventually there would be a time to “accelerate the rebuilding of our fiscal buffers”.