LONDON — A British woman sailing solo in a round-the-world race is being rescued after losing her mast and being knocked unconscious in a vicious storm.

Golden Globe Race officials said Thursday on the race website that they have been in regular radio contact with Susie Goodall since she regained consciousness.

Goodall is said to be “safe and secure” after losing her mast in the Southern Ocean, 2,000 miles west of Cape Horn near the southern tip of South America.

She texted race officials Wednesday to say that her ship was “taking a hammering” in the rough seas. 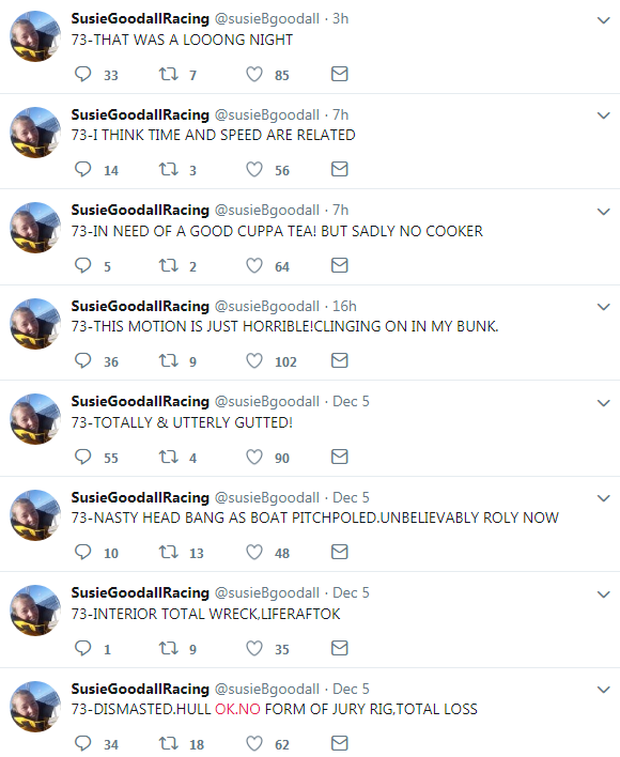 Susie Goodall texts the race organisers about her experience in the Pacific storm which wrecked her boat, dismasting it and knocking her unconscious.

Later she tweeted that her ship had been dismasted in rough seas and that she had been injured. She tweeted hours later that the vessel was “a total loss.”

At about the same time, she activated an emergency beacon calling for assistance.

She has been tweeting updates on her travels since she departed from the French town of Les Sables d’Olonne in July this year.

Writing on Instagram, Suzie’s team have said that she is back in control of her vessel and “doing okay”.

“She lost her mast when the boat pitchpoled (“somersaulted”) in the recent storm, and spent a few hours clearing away the debris. The hull is okay.”

Chilean authorities have directed cargo ship the MV Tian Fu to rescue her. The carrier is expected to reach Goodall on Friday.

AT 1100UTC 5th Dec GGR WERE ALERTED BY UK MARINE RESCUE CO-ORDINATION CENTRE THAT Susie Goodall EPIRB DISTRESS BEACON WAS ACTIVATED. MRCC CHILE IS NOW IN CHARGE OF THIS DISTRESS SITUATION. GGR HAS SENT A TEXT MESSAGE TO SUSIE. IT WAS RECIEVED NO FURTHER NEWS IS AVAILABLE FOR NOW.

An update on the Golden Globe Race website said that the Tian Fu was on route to Goodall’s location. “If conditions allow and the crew can launch the small man overboard recovery RIB [rigid inflatable boat] it should be simple, but seas could be 5mtrs (16ft) and then it is hard to launch and recover.”

“All entrants are updated on Susie and their thoughts are with her,” the statement continued.

Her 30,000 mile, 9-month solo journey began in July, and at the end of November she celebrated reaching her halfway point.