Home » Lifestyle » Tom Brady on When He Will Retire: 'I Think I'll Know When It's Time'

Tom Brady on When He Will Retire: 'I Think I'll Know When It's Time' 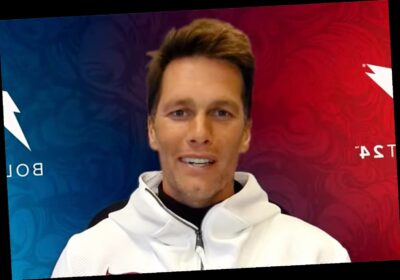 As Tom Brady prepares to make his tenth Super Bowl appearance this weekend, retirement isn't on the quarterback's mind.

Brady, who in his first season with the Tampa Bay Buccaneers led the team to the Super Bowl, said on opening night Monday that he will continue to play until the timing is right.

"Yeah, definitely," Brady, 43, said when asked if he would play past age 45. "It's a physical sport and the perspective I have on that is — you never know."

"You never know when that moment is, just because it's a contact sport and there's a lot of training that goes into it. And again, it has to be 100 percent commitment from myself to keep doing it."

"I think I'll know when it's time," he added, per CBS Sports. "I can never go into this game half-ass."

Elsewhere in the opening night press conference, Brady added that when the day for retirement does come, it will be hard to walk away from the sport.

"It's been a huge part of my life for a long time, and I love thinking about it. I think football to me is much more than just a sport because there's the physical element, there's a mental approach, you know, how you're going to get the job done, and there's the emotional part," he said, adding that "as a quarterback, it's never about what I do, it's really about what we do."

On Sunday, Brady and the Buccaneers will go up against Patrick Mahomes and the Kansas City Chiefs for Super Bowl LV.

Mahomes, 25, recently said that he plans on playing well into his forties as well.

"The plan is to still be playing football [at 43], so hopefully I'll be able to be doing that," the quarterback and Super Bowl LIV champion said in an interview with KCSP 610 Sports Radio in November. Speaking of Brady, Mahomes added, "You want to win as many championships as possible and he's done that for his entire career and he's still playing great football on a great football team."

"For me, it's about coming in day in and day out and trying to better myself and finding a way to win championships here in Kansas City and hopefully I can win a lot of them and try to catch the amount of titles and championships games that he's been in," the soon-to-be first-time dad added.

Kickoff for Super Bowl LV is at 6:30 p.m. ET from Raymond James Stadium in Tampa.