Time to breach the bunkers and flock to the fairways In the 1980s, I spent too much time on golf courses, getting my handicap near single figures. Nothing was more important.

By my late 20s, my love affair with the game had dwindled and, around the same time, I started work at a local newspaper. Like all local reporters, I covered lots of planning issues.

While a constant of the planning debate was open space, and this park or that park, no one ever seemed to notice that thousands of hectares of prime parkland were taken up by golf. 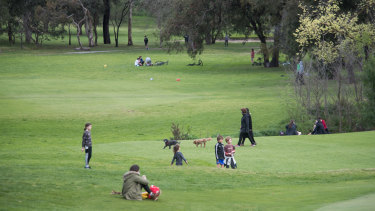 And yet, as a local reporter, whenever parks came up as an issue, it was as if these huge swathes of green space didn’t exist. They were off-limits to discussion of alternative uses, despite them being reserved for a maximum of around 240 players a day on an 18-hole course.

During Melbourne’s first coronavirus lockdown, Royal Park golf course became parkland and dozens used it for passive recreation. I live nearby and, having done some sums, decided it didn’t stack up just as parkland; golfers needed a public inner-city course because golf shouldn’t just be for the rich, and Royal Park had many hectares of green space for passive recreation.

Then last Monday, during our city’s second lockdown, a friend invited me for a walk at Northcote golf course. It was a revelation. Hundreds were using the nine-hole course as a park. Over the weekend when the weather was good, I was told, thousands may have been using it.

I went back four of the next five days just to make sure it wasn’t an anomaly. Daily, there were at least 10 people on most holes at all times, some walking a dog, others wheeling a pram, and kids playing everywhere.

In 2017, writer Malcolm Gladwell asked why golf courses are allowed to take up so much space, often in areas in desperate need of a public park. Few other sports need as many hectares. “Because golf involves launching a potentially lethal projectile at great speeds across enormous distances, you have to severely limit the number of people on the course at any one time.”

He calculated the typical 18-hole course needed 11,000 square metres per player. If basketball was played according to the geographical needs of golf, a court would be 12 hectares. “They’d have to play on motorcycles,” Gladwell quipped.

Northcote golf course has plenty of linear and pocket parks nearby, and the area’s large All Nations Park isn’t too far away. But in a city that, pre-COVID, expanded at the rate inner Melbourne’s population did, there can’t be enough sizeable parklands.

Most importantly, this is public land, bordered on some sides by industrial land that will likely one day be residential developments. Having once been an avid consumer of such land as a golfer, and then later as a journalist covering hundreds of debates over density and open space, I’m convinced there’s no way the best result for the highest number in our increasingly dense city is keeping spaces like it for golf.

At the very least, as golf's popularity dwindles by around 1 per cent a year, public courses should be forced to only open to golfers during set hours across Melbourne – 10am to 3pm, maybe – and the space made available to the community the rest of the time.

I was wrong about plenty in the 1980s. I enjoyed some of the music of the band 1927. I believed the day-glo pink BMX bike I owned was the height of chic. And I was wrong about the importance of golf.

Back then, Melbourne was a city of 3 million people. Today, as well as having sprawled outwards on our journey to 5 million, we’ve squeezed hundreds of thousands more into the existing city. It’s time to give those who now live in areas surrounding golf courses the public space they are entitled to.