Artist Daniel Crooks, known for his hypnotic time and shape-shifting digital video and photography, yearns to slice an Antarctic ice core open and see time millions of years ago.

“I want it so bad but they won’t let me go,” he says. “You have to be an actual scientist. Having some idiotic pseudo-scientific artist hanging around waffling on about how cool it is — it’s not that valuable to their expeditions, sadly.” 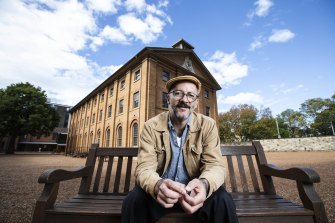 His new work, Boundary Conditions, the third art work in Sydney Living Museums’ annual art commission, may be his biggest yet. A meshing, moving intricate tapestry of footage from historic NSW sites, it will play outside the Hyde Park Barracks day and night on a suspended nine-by-seven-metre LED screen.

“I’ve been wanting to play with one of these things for a long time,” Crooks says. “We’ve all seen the ones used by MacDonald’s and Hungry Jacks. They’re not cheap and they’re not easy to use but this is a great opportunity to take that incredible level of image output and not be selling burgers or doughnuts with it.”

It combines footage of buildings, landscapes and interiors at Parramatta’s Female Factory, Elizabeth Farm, Rose Seidler House, Hyde Park Barracks, Cockatoo Island and the Royal National Park and, when finished, will stand like an otherworld portal in the barracks’ front courtyard.

“I’m a huge fan of the idea of the cross-section. Cutting something to see what’s inside and how it works. A huge part of my video work is slicing into the material of time, thinking of time as a volume, as a volumetric thing.”

Crooks’ forays into Sydney Living museum historic sites were not easy given the intricate and delicate set-up required for his robotic camera track platform. But every building or location provided fresh with inspiration.

“The State Archives, I mean, wow,” Crooks says. “Stumbling through rows and rows of ancient books and tax records, it’s some totally crazily mundane stuff. You think, ‘do we need to keep all this?’ But it looks cool.

“Rose Seidler House, how freaking contemporary it still looks. The appliances, the dishwasher and the oven look like they’re from the olden days, whereas the house, the mid 20th-century modern architecture, the furniture has not aged at all. It’s incredible.”

“There’s a beautiful seam that joins the two,” he says. “On one side you have the original, 200-plus year-old sandstone laid down at the very beginning of the colony. On the other side, this more recent version from the same project.

“I’m trying to connect these disparate spaces, disparate times into something considered valid or cohesive. It’s clearly not, but, if shoot them in a certain way, you can then recombine them into a kind of a seamless, tapestry of different spaces and different times.”

Forever entranced by the existence of a fourth dimension, Crooks hopes audience members come away from Boundary Conditions with a less concrete sense of their world and a different appreciation for colossal LED screens.

“It’s a ride, an art experience passing through different worlds, some harsh, some sombre, and others lighter,” he says. “I can’t wait to see it. It’s gonna be outrageous.”