As if playing trivia wasn’t hard enough, Mental Samurai is upping the stakes. The new Fox game show makes contestants answer questions while spinning around in a giant gyroscope ride — or, as one contestant called it in a preview, "sci-fi carnival equipment." But if you can successfully answer all of the questions while hurtling through the air, you can win $100,000, so you might actually be curious how to apply for Mental Samurai and earn your chance at the prize money.

Host Rob Lowe boasted in a preview that Mental Samurai is "a game everybody can play that very few people can win." That’s because the questions seem relatively simple (ranking national landmarks from east to west, putting together individual pictures to create a common phrase, sorting animals in alphabetical order), but the carnival ride aspect plus the time limit is designed to disorient contestants and make the game way more challenging.

The preview reveals that contestants have to answer 12 questions in a variety of categories, including memory, puzzles, patterns, and trivia. They only have five minutes to get everything right. If they miss a question or run out of time, they lose. If they get 12 right, they go to the "Circle of Samurai" to try to win the $100,000 prize. Yeah, first you have to get 12 questions right in five minutes just to level up to try for the $100,000 prize — all while being flung around in a spherical machine. It’s no wonder Lowe told Variety that the "very simple game is almost impossible to crack." 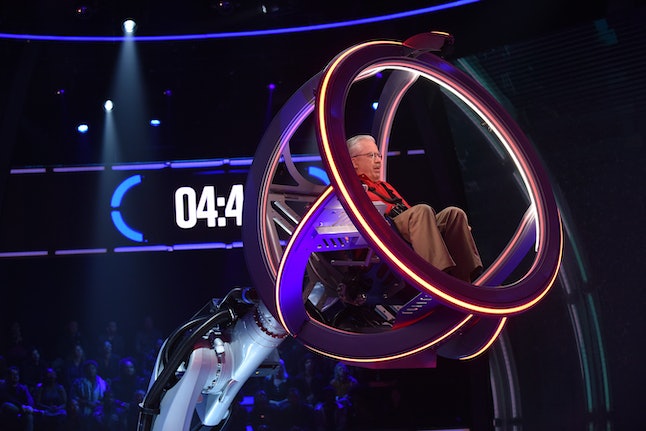 And that means a lot coming from Lowe, considering that, as he toldVariety, he went on The $10,000 Pyramid when he was just 15 and won big. So if you want to be like Lowe and think you can hack the bonkers set-up of Mental Samurai, it’s relatively easy to apply. According to the casting website, you have to be at least 18 years old. Casting for the first season took place in October of 2018, so they’re not currently looking for contestants. But you can still fill out the application in hopes that you can land on a possible second season of the show.

The online application is accessible here and asks you to fill out your name, location, occupation, and answer a few game show-specific questions. These include saying what your favorite mind games are, what apps or console games you play, and how you would spend the money if you won. You also have to upload a recent picture and a two-minute video describing yourself and why they should pick you to play. The site encourages you to really amp things up for the video, saying, "We love personality so don’t be afraid to have fun with it." After all, this has to be an entertaining show for viewers to watch.

But if you think the "ultimate obstacle course for the mind" might be a little out of your wheelhouse or you get motion sick in giant gyroscopes, you can still watch the fun go down from your couch starting March 19 at 9 p.m. ET on FOX. That way you can play along without the pressure.