If you’ve been missing Spider-Man since Avengers: Infinity War, you’re in luck! The Marvel hero returns on Dec. 14 in Spider-Man: Into the Spider-Verse. This isn’t your typical Spider-Man flick, though. For starters, it’s not in the same universe as the current live-action franchise. Tom Holland doesn’t even make a cameo in Into The Spider-Verse. Instead, this animated movie introduces Miles Morales, the first half-Black, half-Latino Spider-Man, voiced by The Get Down’s Shameik Moore, to the silver screen — surrounded by a ton of other Spideys.

There are also a lot of meta Spider-Man references in this new film, but unfortunately, they don’t include an appearance by the current live-action Spider-Man actor. This flick does have a past-his-prime version of Peter Parker (voiced by Jake Johnson), who shows Miles the ropes on how to become the classic superhero.

While Holland, who’ll soon appear in Spider-Man: Homecoming doesn’t show up in Into The Spider-Verse, Spider-Man’s late creator Stan Lee does, making a poignant cameo that’ll feel very special to fans. Spoilers ahead.

Lee was known for popping up in every Marvel movie, usually when you’d least expect him. Sometimes he had one line, sometimes he didn’t even speak. And in Into the Spider-Verse, Lee’s line will surely move you to tears.

In an interview with Fandango, the film’s producers Phil Lord and Chris Miller discussed how, long before Stan Lee’s passing, they wanted to include a poignant scene where Lee would hand Miles the Spider-Man suit, saying “There’s no give backs.” “I remember when we talked about it, we said, ‘You know, he’s so integral to the spirit of this movie that we don’t want to just give him a little passing cameo.’ We wanted him to be more important and carry some emotional weight to the movie,” said Miller. Lord added that since Lee was the one who brought Spider-Man to life, he should be the one handing him “something important like a talisman.” 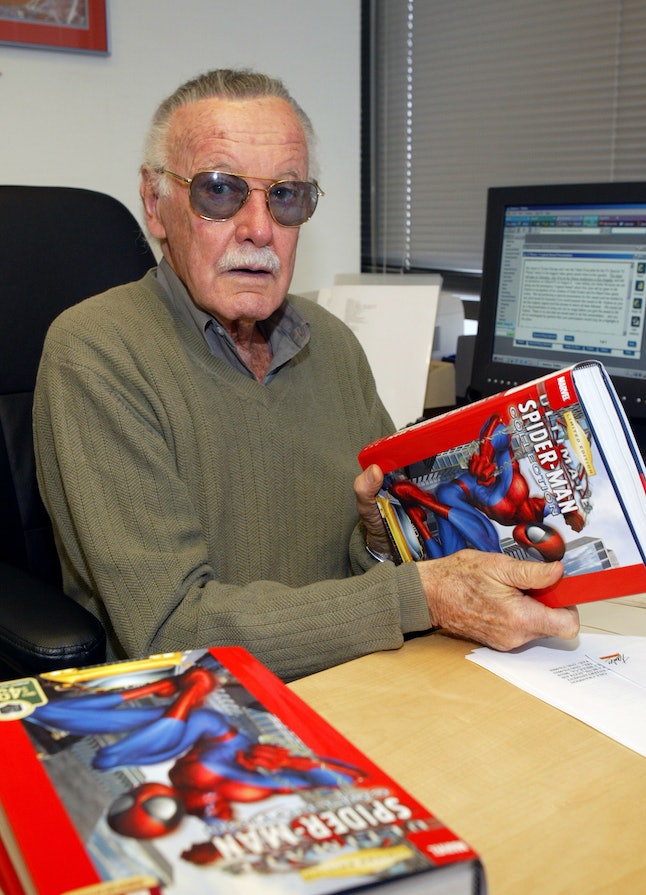 The scene was already quite powerful, given how it shows that Miles Morales is just as valid as Peter Parker in the Spider-Man suit, giving him the stamp of approval from the classic superhero’s creator. But with Lee’s passing, it takes on an even more profound meaning. “It made it extra meaningful and moving to watch the movie get finished and just know that he gets to be such a resonant part of it,” explained Lord in the same interview. “And we showed some fans the feature maybe two or three days after he passed away, and it was really emotional just watching everyone engage with it and collectively salute him.”

Sadly, Lee passed away before being able to watch the scene, but the film’s directors, Bob Persichetti, Peter Ramsey and Rodney Rothman, told The Wrap that he was a fan of the design for this animated take on Spider-Man’s story.

"After he recorded his lines, we designed his image, and that was something he was really happy about,” said Rothman. “Even though he didn’t see the final result, he knew what his role was going to be and he saw what he was going to look like in this version of Spider-Man’s world, and that’s something he really responded to.”

At the Into the Spider-Verse premiere on Dec. 1, Johnson spoke to The Hollywood Reporter about the profound importance of the cameo. “He’s got a line — that I’m not going to spoil — that was meant as one thing and now it’s another since he passed," the New Girl alum told THR on the red carpet. "I’m just really glad that he’s in it because this all started in between his ears at one point, and that’s a really wild idea if you think about it."

But this heart-warming cameo wasn’t the only way Into the Spider-Verse paid tribute to Spider-Man’s creator. Cinema Blend reported that at the premiere, attendees were given a pin with Lee’s trademark glasses, serving as a simple yet incredibly touching reminder of Lee’s legacy. Though it’ll be heartbreaking for fans to no longer see Lee make cameos in the live-action Marvel flicks, this cameo serves as the perfect farewell.