From being bullied as early as kindergarten, to growing up in a body-negative household, the issue of weight had always been front and center for 34-year-old Joanna Nolen. After high school, Nolen began losing weight, which prompted a slew of seemingly positive comments from those around her. What no one saw was that Nolen was struggling severe food restriction, exercise compulsion, and laxative abuse. It wasn’t until she was 30 that a cognitive behavioral therapist brought up the term "eating disorder" to define what Nolen had been struggling with for almost 20 years without a diagnosis. By medical and societal standards, Nolen wasn’t considered underweight, and so doctors simply didn’t realize she actually had an eating disorder.

"I was simply perceived as being ‘determined’, ‘accomplished’, ‘taking control of my life’, and even ‘healthy’," she tells Bustle. “Because I wasn’t underweight, because my blood pressure was normal, because I didn’t fit the mold the medical community is taught an eating disorder looks like, I [went unnoticed].”

Nolen was, however, struggling with atypical anorexia: a disorder recently included in the Diagnostic and Statistical Manual of Mental Disorders (DSM-5) and defined as homogenous to anorexia in that all criteria are met, but the individual’s weight is within or above a range considered typical for that person. Atypical anorexia is part of a category of eating disorders called Other Specified Feeding and Eating Disorders (OSFED), which includes eating disorders that don’t meet the clinical criteria for diagnoses like anorexia or bulimia; it’s estimated that up to 6 percent of the population has OSFED, according to the Eating Recovery Center. 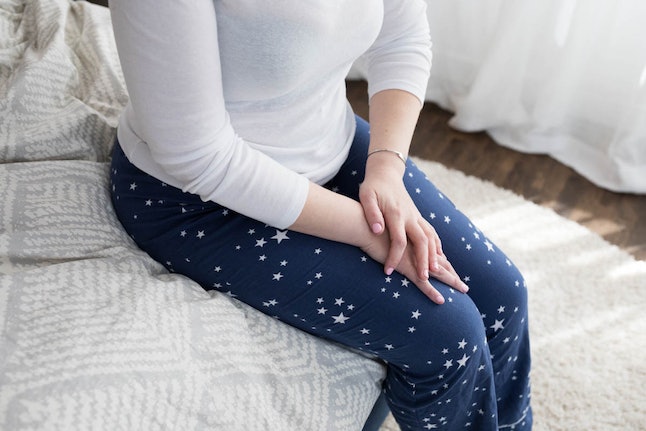 “With atypical anorexia, where the eating disorder behaviors are clearly evident, but the weight is not low enough to meet criteria for anorexia nervosa, it is easy for the individual to receive positive reinforcement for the ‘discipline’ they might show in public or the consequent weight loss that may render this individual into a ‘healthier’ BMI,” Joyce Faraj, Phd, RDN, CDN, a nutritionist at Mountainside, tells Bustle. “Unfortunately, this may be a very common scenario, where an overweight patient with atypical anorexia walks into a doctor’s visit, and they are applauded for their weight loss, without perhaps assessing how the individual reached their current weight. This positive reinforcement can lead individuals to think that whatever they are doing is right, without considering the effects on overall health, nutritional status and mental health.”

A more holistic view of health, one that takes mental health and relationships with food into account, suggests that weight is not necessarily indicative of health, and similarly, weight loss doesn’t always equate to metabolic or cardiovascular improvement. Recent research around body mass index (BMI), the oft-cited ratio between weight and height, establishes that this ratio is not actually a good metric to measure overall health; screening based on frequency of disordered eating behaviors and mental health disparities, Faraj says, would be a more effective way to help catch more cases of disordered eating before they become extreme. Despite the clear science-backed evidence, many people still engage in toxic diet culture. And diet culture’s glorification of thinness, and the so-called positive reinforcement that goes along with it, is what Nolen says fueled her disorder for much of her life. It’s also what fuels so many others who may be struggling with atypical anorexia.

“For me, my eating disorder as a whole started simply as a means to ‘get healthy’ after freshman year of college,” 24-year-old Kristen Carlstrom tells Bustle. Carlstrom explains that as she outwardly focused on losing weight, she was viewed by her friends, family, and peers as a symbol of health — but she was struggling very severely with both orthorexia — an obsession with ‘healthful’ eating, according to the National Eating Disorders Association (NEDA) — and atypical anorexia. “People viewed me as the go-to resource for advice on health and exercise, wishing they could be as healthy as me because I was losing weight, I was getting toned, and receiving positive reinforcement for it.” But, she says that by society’s standards, “I wasn’t at a low enough weight for people to actually become concerned.” 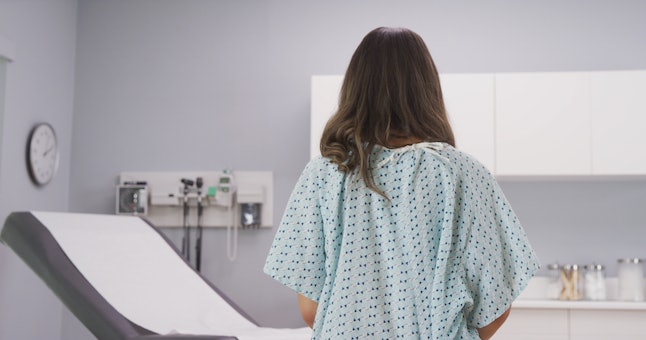 According to Faraj, behaviors are what matter most in eating disorder diagnosis. “Weight as a currently established criteria for typical anorexia nervosa would only catch the most severe and long-term cases of anorexia, and not those who may be at risk or who have only just begun restricting,” she says.

That’s one reason why experts are beginning to acknowledge a more holistic model of nutrition that doesn’t use weight as the sole metric of health. Faraj says that people who take part in habits and behaviors that help them feel better, mentally, physically and emotionally, are more likely to have better metabolic outcomes (meaning, they are less likely to develop diseases like heart disease, high blood pressure, or type 2 diabetes), as well as decreased stress, which are both determinants of health and disease. “A well-nourished brain and body are more likely to accept and understand the benefits of choosing other factors to measure health, such as blood pressure, depression, stress levels, anxiety scores, as opposed to a number on a scale,” Faraj says.

In a culture that is still reluctant to let go of its fatphobia, people who fit a particular size can easily have their struggles with atypical anorexia overlooked. “A lot of people think only of the physical effects of anorexia, but your brain suffers a lot too,” Carlstrom says. “You have mood swings and brain fog and you’re fatigued all the time. I got anxiety for the first time, I was in a state of depression for a while.” Still, no one noticed these internal changes until Carlstrom’s weight was low enough to trigger concern.

For Nolen, it was the realization of how exhausted she had been that made her seek diagnosis. “I made an appointment to see my regular MD and the second he entered that exam room, I broke down. The floodgates of the lifetime of hate and disgust towards my body, the unhappiness and unfulfilled life I had been living consumed with restriction and rules poured out of me,” she says. It was then that she was referred to a local cognitive behavioral therapist. Within 15 minutes of her first session, Nolen was referred to the Eating Recovery Center of Sacramento, California, for an assessment. 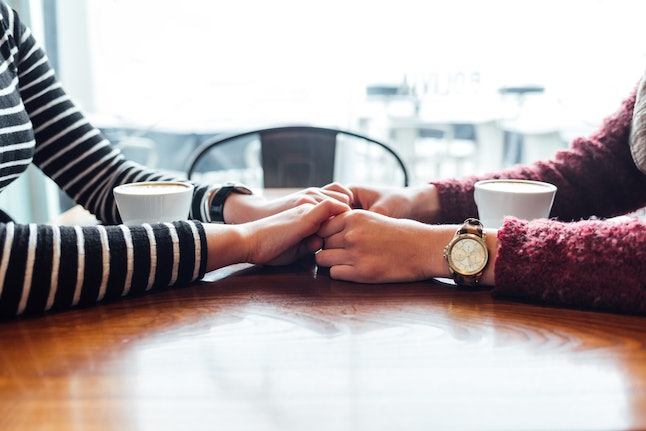 Still, it had taken 25 years for someone to recognize something was wrong and finally diagnose Nolen with an eating disorder. It’s these delayed diagnoses that are likely the most significant source of issue with atypical anorexia, as they allow patients to carry on with disordered and incredibly destructive forms of mental and physical self-harm for years.

But even after people work towards recovery, they can continue to encounter fatphobic bias even in places like their doctor’s office. Carlstrom tells Bustle that during recovery, her doctors shifted their focus from her restrictive eating to her weight change, as in recovery she was now considered overweight. “[Though my body had put on this weight], I was still engaging in those anorexic, restrictive behaviors — but to my doctor and society I was simply overweight and I was instructed to begin restricting calories again.”

It’s cases like these that show how important it is for medical professionals to reconsider their own subconsciously ingrained weight biases in order to provide their eating disordered patients with the proper care. “Regardless of the comments that medical professionals have made that have hindered me in my recovery, my biggest issue has been that I explicitly told them that I was recovering from an eating disorder. Their ignorance to how to approach my disorder just because I didn’t fit a culture-driven picture of anorexia (aka a lower weight), was [quite damaging].” 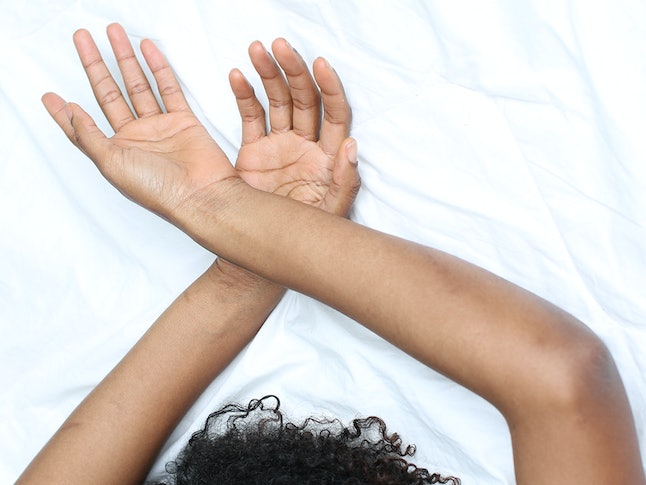 Both Nolen and Carlstrom have continued to work at recovery. Carlstrom says that being OK with her body’s size is still something she works on every day. “It’s a process that you have to commit to and realize that eventually you’ll get there,” she says. And with the right treatment team, including mindful and weight-inclusive dietitians and primary care practitioners, recovery is possible.

“Accepting that our body’s genetic predisposition is meant for us to naturally be in a weight that is much different from our expectation may be another challenging aspect of eating disorder recovery,” Faraj says. “But changing the focus from weight, shape or size, to functionality and mindfulness is another goal of [recovery].”

With a lot of time and practice, these women have been able to separate the voice in their head that is their eating disorder — their mental illness — from the voice that is genuine and their own. “Every day I wake up and I make choices that are most authentic to me,” Carlstrom says. “None of those choices have to do with making my body smaller.”

If you or someone you know has an eating disorder and needs help, call the National Eating Disorders Association helpline at 1-800-931-2237, text 741741, or chat online with a Helpline volunteer here.