Attempts to break into ATMs and steal cash more than doubled in the U.S. last year, as some criminals took advantage of civil unrest in cities and others targeted the larger-than-usual amounts of cash stocked in machines when banks closed due to the coronavirus pandemic, ATM security companies said.

"We saw it all, from hand tools to explosives to vehicle attacks," said Jack Burns, vice president of ATM security for Cardtronics, which operates 285,000 cash machines in 10 countries.

Attempts to break into automated teller machines jumped about 150% from 2019 to 2020 at ATMs protected by 3SI Security Systems, a Malvern, Pa., company that provides security technology for banks and credit unions. ATM thefts increased more than 50% in 2018 and 2019, based on surveys by the ATM Industry Association. The trade group said it didn't do a 2020 survey due to the pandemic.

Several police departments and the federal Bureau of Alcohol, Tobacco, Firearms and Explosives said they don't track attempts to steal money from ATMs as a category.

A bank machine can hold a couple-hundred-thousand dollars, industry executives say. Smaller ones at convenience stores often have up to $20,000. During last spring's pandemic lockdown, ATMs that normally held $50,000 might have contained $100,000, said 3SI Marketing Director Lisa Moughan, because banks and credit unions urged customers to use the machines for withdrawals when many branches temporarily closed.

While many theft attempts fail, successes yield $83,000 on average in 3SI's experience, Ms. Moughan said. Police have recovered about 80% of the money stolen from ATMs equipped with the company's technology, she said.

The most common ATM-related crime is skimming, in which thieves capture data in a card's magnetic stripe with a device attached to the machine, or use hidden cameras to record people keying in their PIN. A growing number of ATMs in Texas have been ripped open using chains hooked to trucks or construction equipment, Mr. Burns of Cardtronics said. Trying to explode the machine is an increasingly common tactic in some parts of the U.S., he said. 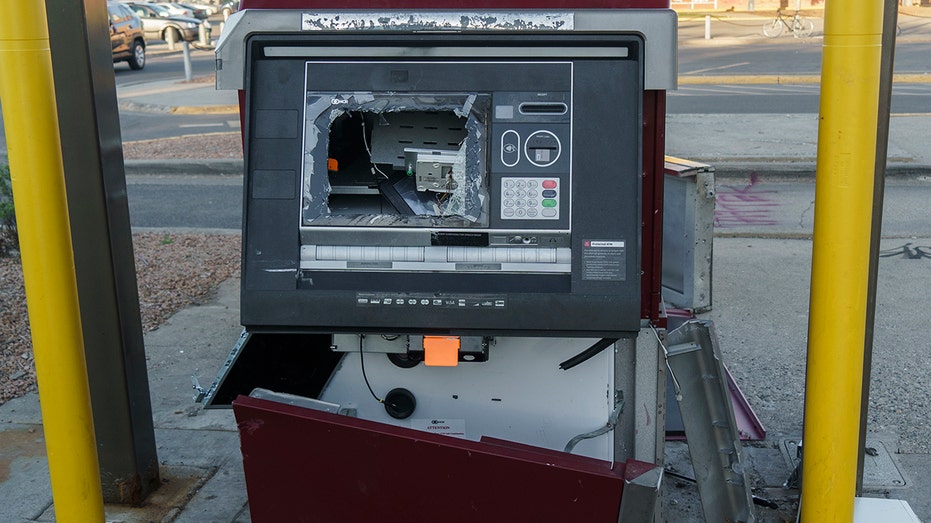 Wells Fargo ATM that was smashed up in Minneapolis on May 31, 2020 during a demonstration to call for justice for George Floyd. (Photo by Shay Horse/NurPhoto via Getty Images)

"If you blow something up, yes, you may get access to it, but you might also have air full of confetti," Mr. Burns said.

There were 240 attempts to breach ATMs in 17 cities between late May and the end of June, about half of them in Chicago and Philadelphia, said Cardtronics, which has stand-alone ATMs at convenience stores and other businesses. During that time, many cities had looting at nights after protests sparked by the killing of George Floyd while in Minneapolis police custody.

Philadelphia police said 157 ATMs were damaged or destroyed with illegal explosives in 2020 — up from five in 2019 and two in 2018. Hundreds more machines were damaged by mechanical means, said Lt. Thomas Fitzpatrick, commander of the bomb-disposal unit. He said most of the explosions occurred during civil unrest.

Lt. Fitzpatrick declined to say how many arrests have been made, citing active grand jury cases.

An ATF spokesman in Philadelphia said that so far, two people face federal charges. One is a 24-year-old man charged with malicious damage of property with an explosive device. He is accused of trying to blow up an outdoor ATM in North Philadelphia using a device similar to an M-80, according to court records.

The bureau named Capital One Financial Corp., Citizens Financial Group and PNC Financial Services Group as owners of some of the ATMs.

PHILADELPHIA POLICE: AT LEAST 50 ATMS HAVE BEEN BLOWN UP IN GEORGE FLOYD RIOTS; MAN ARRESTED ON WMD CHARGE

Cardtronics is installing devices in ATMs that spray traceable ink onto the cash and possibly the attacker. 3SI also uses ink-staining devices, as well as GPS tracking technology that can give police real-time information on a stolen machine's location.