The news from Heidelberg University that parents tend to be happier than non-parents in old age, but this only holds if their children have moved out, will come as no surprise to those of us desperate to regain a bit of peace and privacy from our adult children. 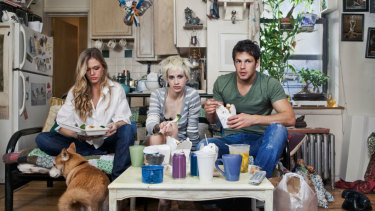 Why would they ever want to live in a share house when it’s free to stay with their parents?

Make no mistake, my husband and I love our kids (aged 26 and 24) to distraction, and they seem (by and large) to love us back. We may disagree about music, literature, gender politics and checking mobile phones during meals but, on the whole, we enjoy each other's company enormously. Yet as I write this, our early Victorian home is being shaken by drills and hammers as its top floor is being reconfigured.

Last Sunday, our daughter Leonora finally achieved her dream of being able to move out into a flat share with a friend. As a very junior editor in the publishing business, she'll be living on beans on toast for the foreseeable future, but it's worth anything to be free of us after three years of living at home – and we were so desperate to be free of her that this has been dubbed the Lexit. Our son Will, a law student, is likely to remain dependent on us for at least two more years, so her old bedroom is being converted, with his, into a small self-contained flat.

We count ourselves unbelievably lucky to be able to manage this, just. Everybody I know who is living indefinitely with their adult children is going mad.

"We never expected to still be living with the kids," said one fellow author. "We're not just living with our daughters but with their boyfriends. Fitting six adult people into a three-bedroomed house is no joke, even before you think about food, quiet and your own relationship."

I do know. Only yesterday, my daughter and I had another flaming row over – of all things – which way round the breadboard should go. While I remember some appalling rows with my own parents as a teenager, by the time I was 18 I, like all my generation, was out and away. Even if independence meant living in a basement room with storage heating and a lethal gas boiler, it was just possible as long as you had a job, any job. No such luck for our kids. They work 12-hour days but earn less than the living wage, and certainly less than what a rented room plus bills now costs. The result is that they are staying in the nest indefinitely, and even if they pay parents a little rent, they remain infantilised.

One friend of mine made me laugh recounting how her son demanded to know why there wasn't any cheese in the fridge.

"But there's loads," she answered.

"No, it isn't goat's cheese," he said, accusingly.

It was all so different when they left for the first time. I remember going into weeks of mini-mourning when first one and then the other went off to uni. But then, one after another, they returned; and once the joy of their company wore off, the battles began again.

My daughter, who managed to travel around China all by herself for three months, went back to asking for lifts to the station barely a kilometre away when the weather was bad. They may be far more talented cooks than I will ever be, but somehow my husband and I wound up doing the evening meals again. And the washing up. Meanwhile, borrowing my car and returning it almost empty of fuel is a regular feature, even if my son is kind enough to clean it himself.

Needless to say, all of our grown-up children are utterly charming. They work ferociously hard at their ill-paid jobs, they are far more professional and well-informed than we ever were, and they are thoroughly nice human beings – to other people. So one pair of friends came up with what I think is a brilliant solution.

An art dealer father had a poisoned relationship with his son, which distressed them both very much. He was a friend of an artist's son, who was getting on very badly with his own mother. The art dealer suggested they try to swap their sons, so that each became a lodger in the other's home. The sons, removed from their parents, stopped locking horns and became the polite and reasonable young men they really were.

Three years down the line, they still live in each other's homes as valued friends in their own right, and furthermore, each son has learnt about their hosts' profession in a way that would never have been possible had they stayed in the nest.

If our own new arrangement should fail to work out, I'm thinking that the small self-contained flat may contain a son-swap, too.

Amanda Craig's novel, The Lie of the Land, is published by Abacus. Telegraph, UK