The undercover operative is always right We know authoritarian regimes such as China surveil their citizens with an omniscient high-tech eye, and that their fates are being decided by micro-transgressions they committed in what they thought were private moments. A quip at a family dinner. Laughter at the wrong joke. Downloading the wrong book. The apostate will give herself away eventually.

So will you. Capitalist Australia has a low-tech surveillance apparatus very few people know about. It’s called “Dave”.

Dave targets us in our workplaces and sends the bad news on us back to our bosses. Dave is a friend of mine, a shunned thespian. He tried out for Othello. He tried out for Bran Nue Dae. He tried out for Noel Coward farces in cross-braced Mechanics’ Institutes. He tried out for a razor ad. But Dave is Vietnamese, and demonstrating on national TV that your razor can shave a Vietnamese dude is not going to capture the serious shaving demographics like the chrome-dome street-thugs, or those maidens setting out to defoliate the bifurcation.

No. His services as an actor were universally declined, until his agent said to him: ‘‘There’s always the secret shopper gig, Dave. Lachy Hulme aced it for years. Took obnoxiousness to a whole new level.’’

‘‘Secret shopper?’’ Dave asked. Like us, he didn’t know there is an industry of stalled actors working for corporates, pretending to be clients, and reporting back on how those corporation’s employees behave.

Dave took to it. Here’s an example of a role he played recently. He styled himself obnoxious with a fedora, some pimp bling and Kobe sneakers, and went into a German auto showroom as a potential buyer. Giving off hints he was an IT pioneer, he leant back and lit up and said he wanted to test-drive the top-of-the-range TLX8. Thinking of buying a couple, he said, matte black for me, rose-gold for my sweet thing, all mod cons in both. He asked the salesperson questions not even Sergei Korolev could answer and made insulting sounds at her responses, before test-driving the car around the lake at red-line revs on two wheels while taking selfies as she rode shotgun, white-knuckled, miming prayer. Hours later, when the exhausted salesperson had Dave on the cusp of signing, he lobbed the key across the desk to her and said, ‘‘heyho … change of mind, ladyboy’’, and walked out.

Then, like one of Mao’s little rats ratting on his fellow rats to the rat bosses, Dave filled out a rat-report for the marketing head of the German auto company about his experience. Did the salesperson go through the 10-step protocols? Was she polite? How was her product knowledge? Did she seem at all sexist? Homophobic? Did she mention our finance plans? 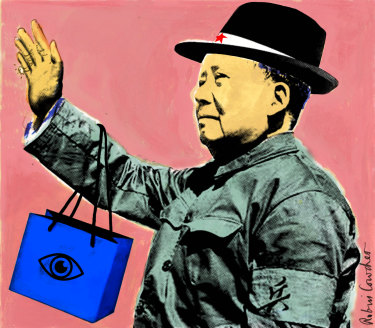 After Dave’s report is digested by upper management, the salesperson is brought in and hauled over the coals. “You missed protocol seven. You whimpered during the test-drive, which shows no faith in our airbags. And you stared at the dude’s sneakers in what he took to be a racist manner. You’re on your last warning, Teal.”

Next day, Dave did the same thing at a rival German auto manufacturer and after lobbing the keys to the traumatised salesperson, he filled out a report for his original client detailing how the sales experience at their competitor compared.

A sweet blend of industrial espionage and dramatic art.

How many clients who you think you’re smarming profitably are actually rats ratting to your boss?

You’re excited because you think you have a buyer on the hook for that red-brick Edwardian in Glenferrie Road? It’s likely one of Melbourne’s many secret-shoppers running surveillance on you.

Dave doesn’t dream of graduating to Neighbours or Utopia any more. He’s hooked on the adrenal high of subterfuge. Can you imagine how shallow TV acting would feel compared to his daily roles? Imagine the frisson that accompanies his double-dealing, where the only thing keeping him from being unmasked and denounced is a Brandoesque immersion in character. (That, and the salesperson’s fear of getting it wrong, denouncing a legit tech wiz with real cash to splash, and being fired.)

This isn’t some soap where the viewer knows you’re an actor playing a part. This is real acting. This is art. Here, if you’re good, your audience really believes you’re the arsehole you’re playing.

And Dave assures me it’s gratifying using Maoist tactics and Stanislavski’s method to cull insufficiently obsequious employees from the workforce.

It’s good for the economy. Good for the country. He wonders now why he ever contemplated Coward.