Home » Lifestyle » The Tony Awards Were So Good: 6 of the Most Memorable Moments from Broadway’s Biggest Night

The Tony Awards Were So Good: 6 of the Most Memorable Moments from Broadway’s Biggest Night 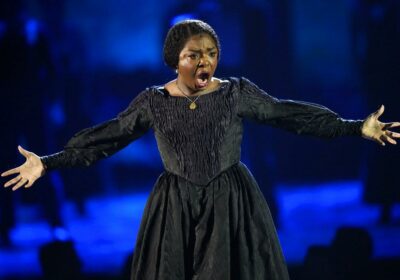 Broadway celebrated its first full season after the COVID lockdown with the 75th annual Tony Awards, hosted by a newly minted Oscar winner and spotlighting stage work that included a media-darling frontrunner (“A Strange Loop”), a historical pop confection (“Six”), a King of Pop bio-musical (“MJ”) and an epic look at the roots of American capitalism (“The Lehman Trilogy”). Much of the ceremony played out as expected, but as ably hosted by “Hamilton” alum Ariana DeBose, the night still provided plenty of moments for theater fans to remember.

(1) Early wins for “Six and “MJ” prepped the audience for a night of surprises — which didn’t quite materialize.
A number of Tony predictions (including ours) suggested “Six” had a shot at the award for Best Score, so that win, in itself, wasn’t much of a surprise. But by the end of the ceremony’s first hour (which aired on Paramount Plus), “Six” had won two awards and “MJ” had scored three, suggested there might be more big losses in store for the expected frontrunner “A Strange Loop.” That’s not ultimately how it played out, but that first hour still held enough surprises to keep everyone guessing throughout the night.

(2) Did Ariana DeBose’s opening number make the Tony Awards… cool?
OK, maybe it’s impossible to make the Tonys actually cool, but the opening number of the main show on CBS (after the first hour of awards dispensed on Paramount Plus) started out sounding more like pop than classic musical theater, and then morphed into a mash-up of familiar showtunes that was clever enough to delight purists. DeBose, in a white sequined body suit and tails, led it all with the confidence of, well, a Broadway regular. It was hip and queer and sexy, and it satisfied the old-school avids as much as it made Broadway look like a place the cool kids might want to check out, too.

(3) In the race for best Tony number, the award goes to “Mr. Saturday Night.”
For Broadway musicals, especially new musicals, the Tony telecast represents the high-stakes, highest profile opportunity to connect with a national audience. Led by megawatt stars Hugh Jackman and Sutton Foster, “The Music Man” got pride of place as the first nominee spotlit on the CBS broadcast; “A Strange Loop” showed off its stellar opening number and “Paradise Square” its 11 o’clock closer (as the camera smartly pulled in tight on leader performers Jaquel Spivey and Tony winner Joaquina Kalukango); and “Company” onscreen looked appealingly like a musical in an Instagram square. But it was “Mr. Saturday Night” that perhaps got the canniest showcase, with a sequence that nodded at the production’s ensemble before making way for the star attraction, Billy Crystal, effortlessly winning over the crowd at Radio City — and giving TV viewers a taste of the fun they, too, might have if they bought a ticket to Crystal’s Broadway show.

(4) Deirdre O’Connell tells us all to make the weird art.
Either you have no idea who Deirdre O’Connell is, or you know that she’s one of New York’s greatest stage actors. Our predictions pegged LaChanze or Mary-Louise Parker as the winner for Leading Actress in a Play, in part because O’Connell’s nominated work in “Dana H.” was experimental in way that feels more at home off Broadway than on it. But still, Tony voters remembered that star turn, giving O’Connell the trophy for a bravura, fully lip-synched performance that exemplified O’Connell’s unparalleled but often undersung work. “Make the weird art,” she told the audience from the podium — after all, you just might win a Tony for it.

(5) Will Joaquina Kalukango’s roof-raising performance and award win for “Paradise Square” move the needle at the box office?
Plagued by COVID disruptions, the 2021-222 season has been a rough one for a lot of shows, including “Paradise Square,” the historical epic that’s been struggling to draw crowds since it opened in the spring. During the Tony telecast, TV audiences got a taste of star performer Kalukango’s powerhouse turn, and soon thereafter saw her anointed with a Tony Award. Will that spotlight prompt enough interest to sustain “Paradise Square” through the summer and beyond? Only the coming weeks will tell.

(6) Understudies, swings, alternates and dance captains got the shout-outs they deserve.
Going into the ceremony, Tony watchers were looking for the awards show to acknowledge the important, unheralded work of understudies in keeping Broadway running through the ups and down of COVID. DeBose mentioned it early on in the proceedings, but the most striking tribute came when she singled out one of the queens who performed the Tony number for “Six,” Mallory Maedke, as a dance captain who’d gotten the call to jump into the part just 12 hours earlier. It was a reminder that every show on Broadway is as live as the Tony telecast — and it takes a team of committed talents to ensure that the show goes on.