Home » Lifestyle » The Queen refuses to eat burgers with a bun, according to her former chef

The Queen refuses to eat burgers with a bun, according to her former chef 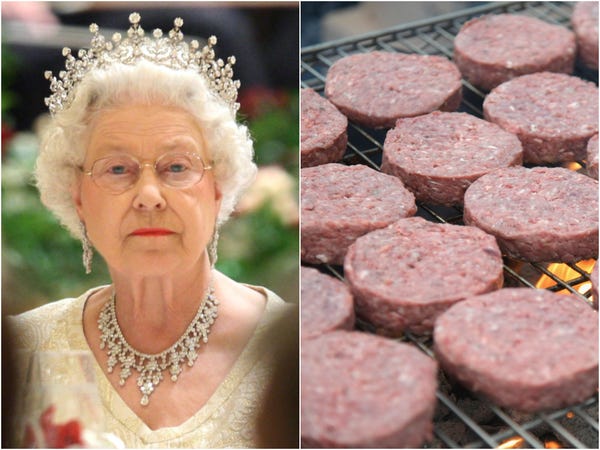 McGrady, who worked at Buckingham Palace from 1982 until 1993, said during an interview with US Weekly that the fast food item was never on the menu during his time in the royal kitchen.

Insider spoke with the former royal chef about the revelation — and it turns out, it isn't the only fast food Her Majesty avoids.

"11 years at the palace and we never served pizza at all, not even at receptions," McGrady told Insider.

"The menus at Buckingham Palace are very traditional French, which wouldn't lean towards having pizza on it.

"Her Majesty's Victorian upbringing dictates that the only thing you would pick up and eat with your fingers is afternoon tea."

The Queen avoids all fast food, and if she were to ever request takeout food, McGrady says the royal chefs would make their own version.

However, she makes an exception for burgers, so long as they are served without a bun.

"It always tickled me at Balmoral, we would make our own burgers," he said, referencing the royal family's Scottish holiday home where they vacation every summer.

"They [the royal family] would shoot deer, and we would do Venison burgers. There'd be gorgeous cranberry and everything stuffed into them, but we never set buns out.

"They would have burgers, but not the buns. So they would eat it with their knife and fork," he added.

The royal family change things up during their summer vacation

The royal family usually change things up during their summer vacation, where a small group will gather in the hills to have a barbecue instead of the typical sit-down dinner that they would have at the palace.

However, the royal chefs were usually never informed what the family's plans were until afternoon tea — causing a mad rush in the kitchen, according to McGrady.

McGrady says the chefs would make two batches of dessert — one in silverware, and one in reusable containers in case they decided to eat outside.

"It was always a mad rush when the Duke of Edinburgh would come down to the kitchen and say, 'We're going to have a barbecue,'" he said.

"The table had to be set and everything was served on silver, so when it came to making the chocolate mousse, we'd actually make double.

"Mousse that could go into silver dishes, so that if the royal family were in for dinner that night, we weren't caught out and could serve it at the royal table.

"But at the same time, if they were going out to the hills we had to make the mousse in plastic tupperware containers. We could never send silver out to the hills, we'd be in so much trouble," he added.