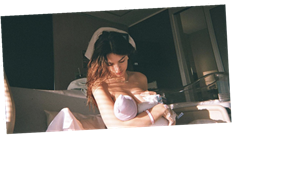 Supermodel Emily Ratajkowski has revealed she's given birth to her first child with husband Sebastian Bear-McClard.

The 29 year old shared the happy news with her 27.1 million followers on Instagram as she posted a gorgeous photo of herself breastfeeding her baby.

The snap sees the star cradling her newborn, who wears a pink beanie, as she looks lovingly down.

"Sly arrived 3/8/21 on the most surreal, beautiful, and love-filled morning of my life."

But what is the origin of this remarkably unique name?

Are you part of The OK! VIP Club? If not, why not? It’s free and gives you backstage access to stories like this, exclusive home tours, special discounts and so much more!

Well, we did a little digging, and the name Sylvester is actually derived from the Latin adjective silvestris which means wooded or wild. This is because the noun silva means woodland.

Sticking with the ancient theme, the middle name Apollo of course derives from the name of the greek god, who was one of the Twelve Olympians.

He is known as the sun god, as well as of music poetry and arts, among other things.

So technically, Emily and Sebastian’s little one is called Wild Sun God Bear…. now if that isn’t a strong name, we don’t know what is!

However, we cannot say yet what the baby's gender is as the couple have chosen to let the child decide.

In an essay she wrote for Vogue, Emily explained: "When my husband and I tell friends that I’m pregnant, their first question after 'Congratulations' is almost always 'Do you know what you want?'

"We like to respond that we won’t know the gender until our child is 18 and that they’ll let us know then.

"Everyone laughs at this. There is a truth to our line, though, one that hints at possibilities that are much more complex than whatever genitalia our child might be born with: the truth that we ultimately have no idea who — rather than what—is growing inside my belly. Who will this person be?

"What kind of person will we become parents to? How will they change our lives and who we are? This is a wondrous and terrifying concept, one that renders us both helpless and humbled.

"I like the idea of forcing as few gender stereotypes on my child as possible."