Home » Lifestyle » The perks (and minor pitfalls) of being a grandfather

The perks (and minor pitfalls) of being a grandfather 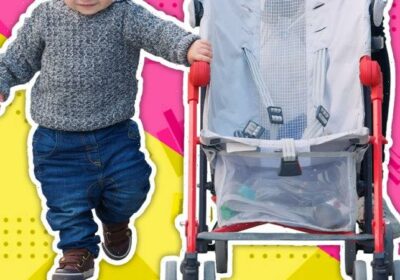 My knees are shot and my back is bad, which is why, on the trip home from the park, I beg my beloved grandson to hop into the pram.

I’m not sure why we even bring the pram, as Pip never wants to go in it. Oh, that’s right, Pip insists on taking the pram because he likes to help push it. 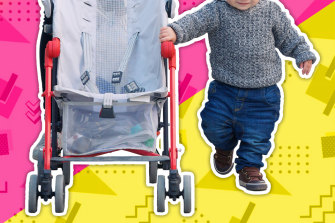 Going up the hill in this manner is like a 20-minute gym session. Pip pulls one way; Clancy pulls the other. The pram has a mind of its own.Credit:Kathleen Adele

Down the hill we go. He stands behind it, both tiny arms reaching up to grab hold of the chassis, as he pushes it along the pavement. He wants, I suppose, to provide transport to the imaginary child that’s sitting in the pram. That needy, pram-dependent child. The one who is certainly not him.

We arrive at the park and abandon the pram at the gate. We make no effort to lift out the imaginary child we have successfully transported. That child will have to make their own way.

I play with Pip, using the equipment. Pip likes the thing that looks like the counter of a shop, especially when I bang the counter and angrily demand a cup of tea. “Why is the service so bad?” I say, hamming it up, and Pip laughs as he occupies himself turning the steering wheel of the bus.

This bus/cafe combo seems quite a bad business mix, which may explain the slow service.

Pip also likes the slippery dip but he’ll only allow himself to slide down if he has first grabbed a handful of bark and placed it, like a benediction, on the bottom of the chute. 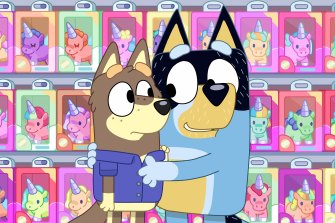 I love Bluey, but surely all grandfathers have their limits.Credit:AP

He does this before every trip, which I assume is due to the influence of Sydney’s toll-road system, in which his parents pay the big bucks every time they leave the house.

An hour later, exhausted, Pip signals it’s time to go home. Again, he reaches up his arms. He wants Pa to carry him back up the hill.

He shakes his head. It seems the imagined child, the one we pushed down the hill, is no longer deserving of his assistance.

I lift Pip up into my arms, which is one of my most favourite things in life. Then I hold him with one hand as I push the pram with the other. I’ve also got the dog, Clancy, whose lead is somehow connected to the hand with which I’m steering the pram.

Going up the hill in this manner is like a 20-minute gym session. Pip pulls one way; Clancy pulls the other. The pram has a mind of its own.

You could put this exercise into the SAS training course and hardened soldiers would burst into tears, begging to go back to the exercise where you crawl through the mud, beneath razor wire, while occasionally defusing a bomb. My limp worsens by the minute.

Finally, halfway up the hill, I beg for mercy. I address Pip directly: “Would you consider hopping into the pram for just the last few minutes?”

He understands every word, shakes his head, and says, “no”. The word is so clear and precise. I am awed by his linguistic skills.

The only problem: he’s not always a linguistic genius. There are plenty of words he doesn’t understand.

“Perhaps,” I’ll sometimes say to Pip, “we should stop watching Bluey because two episodes is enough” and he looks at me as if English is not his first language. He’s a child from Mexico, or Timor-Leste, or Germany, who has inexplicably been placed with this grandfather in Australia, a grandfather who is using a series of baffling squawks to deny him further episodes of Bluey.

I turn off the set, and he makes his protest clear, via a series of stylised dance moves. “I have no idea why you did that,” he appears to be saying, “plus your views on the correct allocation of Bluey episodes are ridiculous”.

Then, minutes later, the linguistic genius is back. I offer him a banana pancake, freshly cooked, and his acceptance is immediate.

He doesn’t quite say: “Superb, this morsel is just what I was hoping for with which to staunch my appetite” but it’s close.

I’m reminded of Pip’s father whose motor skills, when a child, varied considerably according to the task at hand.

Place a plastic-wrapped Caramello Koala inside a locked box, dangled on a rope, above a pool of crocodiles, and the Space Cadet would have it open and in his mouth in seconds. Ask him to pick up an apple core, then put it in the bin, and he’d go to pieces.

Maybe we are all like this. We respond best when the world bends itself to our desires.

And so, we make our way up the hill: a boy, a dog, a wayward pram and a grandpa with a limp. It may not be a pretty sight, but it fills me with joy.

To read more from Spectrum, visit our page here.