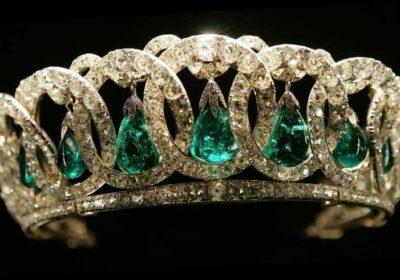 Many of you would love a jewelry box like England’s Queen Elizabeth II. The pieces from her large collection complement her lavish outfits and are priceless, consisting of jewels and gemstones gathered throughout the monarchy’s more than 1,200 years. People dream of owning fabulous jewelry like hers, and The List conducted a survey to ask readers to weigh in: Which iconic piece out of Queen Elizabeth II’s collection they’d most love to own? A total of 652 of you responded, sharing which item you’d love to add to your own jewel collection.

The Grand Duchess Vladimir Tiara is among the most coveted pieces of jewelry the monarch owns. The queen’s reported favorite tiara received 20.55 percent of the vote, earning it second in the poll. According to Town & Country, this luxurious crown has a fascinating history. Duchess Vladimir of the Romanov dynasty commissioned the tiara from Romanov court jeweler Bolin. Although the piece suffered damage after it was smuggled out of Russia, England’s Queen Mary (Queen Elizabeth II’s grandmother) purchased the grand headpiece. Mary had the tiara repaired and added some versatility to the piece. “Fifteen emeralds that once belonged to Mary’s mother Mary Adelaide (the original Duchess of Cambridge) were added, along with a mechanism that allowed them to be interchangeable with the original pearls,” reported the magazine.

As impressive as the queen’s favorite tiara is, you will understand why another piece in her grand collection inspired people to vote for it.

The most coveted piece of the queen's jewelry will surprise you

Tiaras make up a large portion of the queen’s massive collection, and the headpieces account for three of the top five vote-getting items of royal jewelry. The Burmese Ruby Tiara gathered 19.02 percent of the votes, coming in at third place in the poll. According to The Court Jeweller, this headpiece, which the queen wore for her 91st birthday celebration, is somewhat controversial. The Nizam of Hyderabad Tiara, a piece gifted to the queen for her wedding, sacrificed stones to help create the Burmese Ruby Tiara.

Another stunning crown, the Russian Fringe Tiara, placed fourth, with 16.56 percent. Meanwhile, 8.59 percent of those who voted in The List‘s survey chose “other,” with several noting that they had no idea what jewels the monarch owned.

However, the piece of the queen’s jewelry that most people wanted to own wasn’t a tiara at all. The long-serving monarch’s Three Strand Pearl Necklace is the most coveted piece she possesses, with 35.28 percent of those who responded voting that they’d love to own the timeless, versatile piece. People reported that the queen’s love of pearls connects to a centuries-long family tradition. “It’s the necklace that she feels is appropriate — she wants to wear pearls every day as her mother and grandmother did before her,” Leslie Field, author of The Queen’s Jewels, told the publication. “She wouldn’t wear a diamond necklace to go to a charity lunch — it is simply traditional that a lady would wear pearls during the day.”