Home » Lifestyle » The highest and lowest paid jobs 2020 – is yours on the list?

The highest and lowest paid jobs 2020 – is yours on the list? BUSINESS bosses, aircraft pilots and marketing directors are among the highest paying jobs in 2020, according to new data. 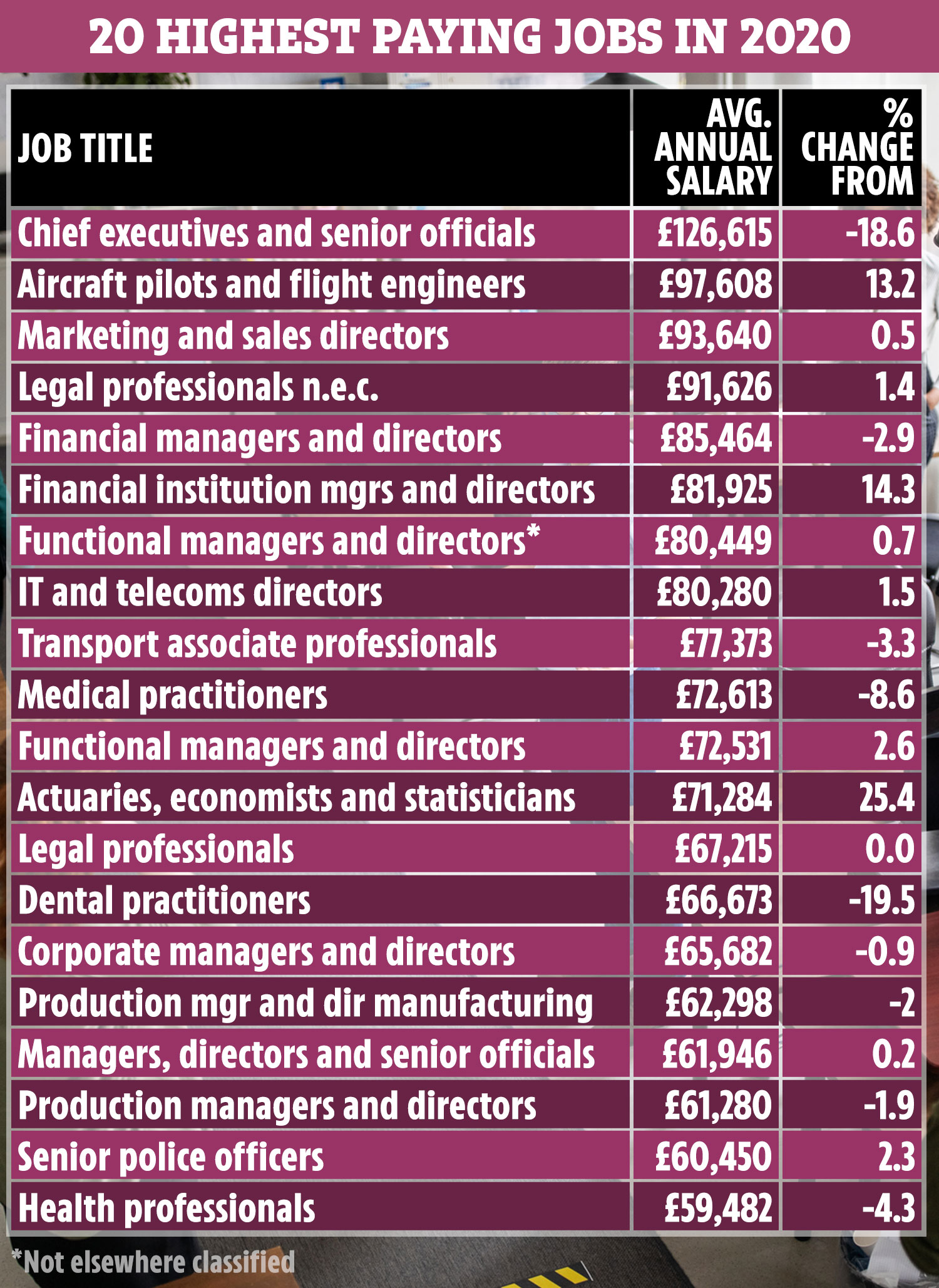 Air traffic controllers were the second highest earners in the 2019/20 tax year with an average annual salary of £93,955, while marketing directors typically take home £93,372 a year before tax.

Marketing and sales directors came in third place last year too, although their pay has jumped 4.8% over the past year.

The figures come from new data published by the Office for National Statistics (ONS), as part of its Annual Survey of Hours and Earnings.

Many of the lowest paid jobs are those in industries that have been worst hit by the impact of the Covid-19 pandemic. 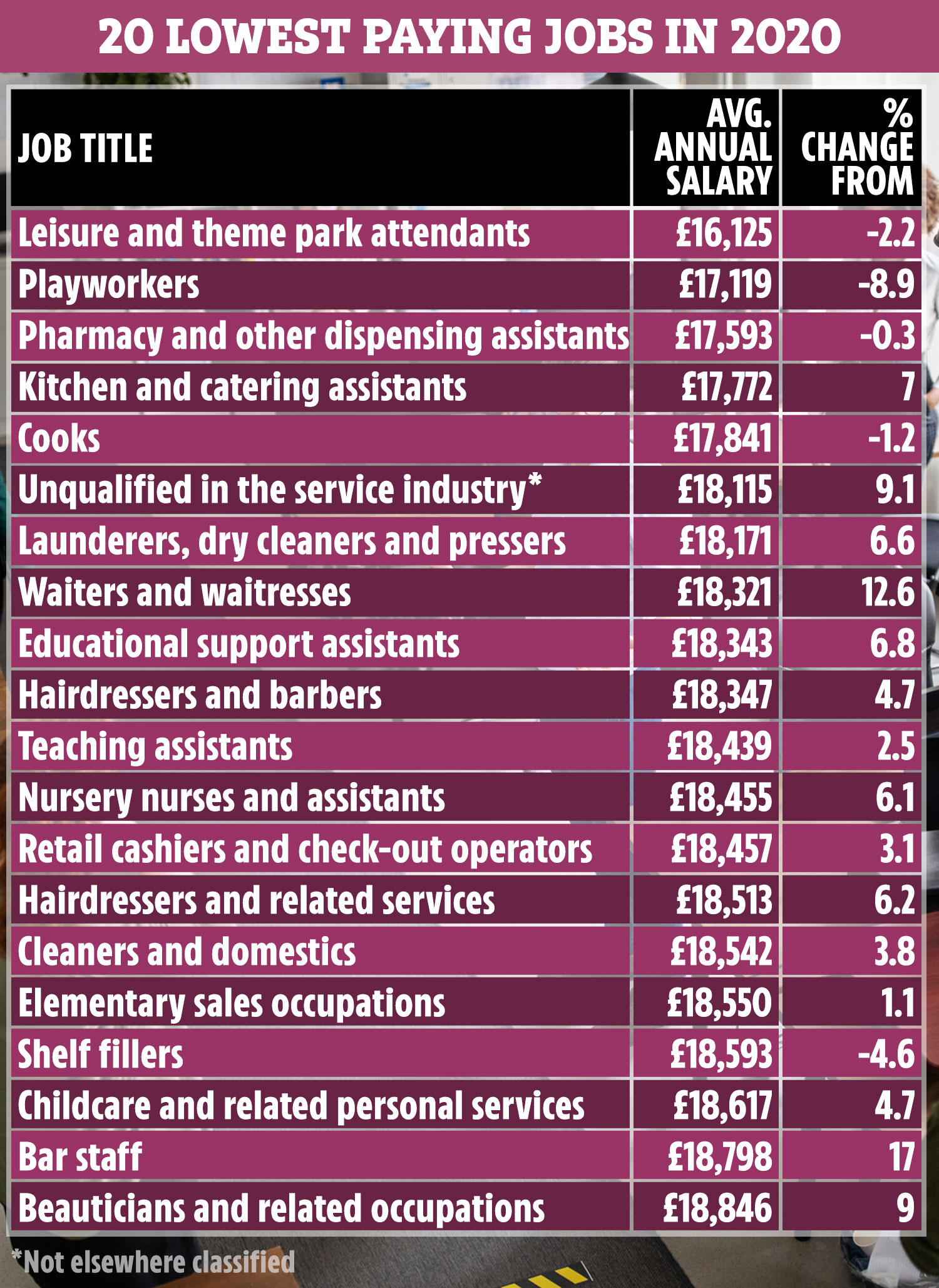 Playworkers, who run out-of-school clubs, were paid the second lowest wages at just £17,199 a year, and saw pay dramatically drop by 8.9%.

This fall in salary is likely to be partly down to the coronavirus crisis, when schools were shut down and kids were told to stay at home following government orders for a national lockdown.

The data is from the pay period up to April 22 2020, and takes into account that around 8.8million employees were furloughed during this time.

The ONS reckons only half of workers had wages boosted to full pay by employers.

But the researchers warn that the figures are provisional as average earnings are likely to have changed in the second half of the year as more workers were told to take a pay cut due to get through the economic crisis.

Pharmacy assistants were the third lowest earners, despite their places of work remaining open during lockdown.

How much money will I get if I have been furloughed?

THE Coronavirus Job Retention Scheme will pay furloughed employees 80% of their current salary for hours not worked, up to a maximum of £2,500.

You'll also get your usual full salary for any hours you do work during the lockdown period.

If you can't work during lockdown, for example if your workplace has shut due to the restrictions, and you earn a regular salary, you can work out how much you'll get by calculating 80% of your normal pay.

The calculation is done on your pre-tax salary – you'll then have to pay tax and national insurance on it as normal.

Over the past few months, the government had been reducing the amount it was paying for furlough so that businesses had to cover a bigger percentage of staff wages.

But under the extended scheme, the cost for employers of keeping workers on furlough will be reduced.

Businesses will only be asked to cover National Insurance and employer pension contributions which, for the average claim, accounts for just 5% of total employment costs.

Employers are still able to choose to top up employee wages above the scheme grant at their own expense – but they don't have to.

The government has said that it will take a few days for the scheme to be fully up and running, but there should be no interruption for staff pay, and businesses will be able to claim the money back in arrears.

This particular research doesn't take into account celebrities, part-time workers or those who've been in their jobs for less than a year.

The gulf between men and women's pay was smaller than last year, at 15.5% compared to 17.4% in April 2019, but still disappointingly high.

The gender pay gap was close to zero for full-time workers under the age of 40, but was over 10% for older employees.

The research also showed that younger employees aged between 16 to 17 and 18 to 21 were most impacted by reduced working hours last year, falling 5.7% and 3.4% respectively since 2019.

Meanwhile, staff in this age group and those working in accommodation and food services are also more likely to be furloughed, and less likely to have pay topped up.

Laura Stewart-Smith, workplace savings manager at Aviva said the rise was likely to be down to the furlough scheme.

She added: "Concern over the future strength of the UK economy is mounting, driven by the reimposition of full lockdown restrictions on economic activity in England until December.

"Now, more than ever, households and firms need to be supported to get them through the uncertainty of the coming months."