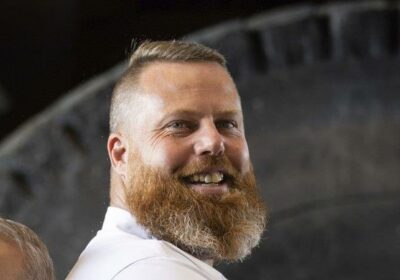 Labor’s Dan Repacholi is a big man with big shoulders – and he’ll need them to carry the burden of winning and holding the seat of Hunter. 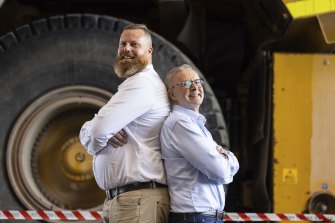 Two Fitzgibbons – Joel and his father Eric – have held the seat since 1984. Labor’s uninterrupted grip goes back even further, to 1910.

But at the 2019 election, Fitzgibbon junior went perilously close to losing the family jewels. A 14 per cent collapse in his primary vote, and a One Nation candidate who claimed almost 22 per cent, resulted in Fitzgibbon’s hold on the seat sliced to bare knuckle territory.

It was Fitzgibbon’s near-death experience that drove him to become a thorn in the side of his party over recent years, reminding Labor of its mining and manufacturing roots.

Fitzgibbon was absent for Anthony Albanese’s visit to Hunter on Thursday, but his message was not.

Albanese went with Repacholi to where the big man used to work – a coal mine engineering workshop.

Over recent years, finding a Labor leader prepared to be seen anywhere near a coal mine – given the party’s climate change policy debates – was akin to spotting a night parrot in Sydney’s CBD.

But with Repacholi by his side, Albanese shook hands easily and posed with the engineers whose day job includes maintaining the network of vehicles needed to pull coal out of the Hunter Valley.

Albanese (178cms tall) was so at ease that he did his first “stunt” of the campaign – standing back-to-back with Repacholi like a 1980s buddy cop film with a large coal dump truck as the background.

According to Albanese, the history that made Repacholi a contentious choice for the seat, such as a social media post after the Delhi Commonwealth Games in which he described India as a “s…-hole”, would be an issue for every person putting themselves forward for public office in years to come. 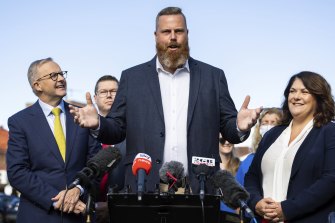 “If everyone is held to account, who now is a young person on social media for what they might put on social media in their 20s, then I tell you what, in 10 years’ time, you will struggle to hold a press conference because there won’t be candidates,” he said.

The importance of Hunter, and neighbouring Paterson, was just as evident as down the road. Nationals’ leader Barnaby Joyce made his play for the electorate, confirming the Coalition’s budget allocation of money to upgrade the Newcastle airport and $56 million for a set of traffic lights and an upgraded road in the electorate.

Newcastle, according to Joyce, is on its way to becoming an international travel hub thanks to a $55 million upgrade to the airport terminal that will generate 4400 jobs and $12.7 billion in economic activity over an unspecified time period.

The more immediate problem, for Nationals’ candidate James Thomson and One Nation’s Dale McNamara, is taking down a man the size of Dan Repacholi.