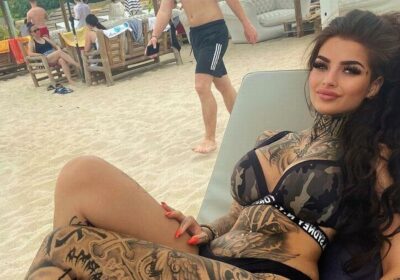 A stunning Instagram model and tattoo artist has opened up about her intricate designs and why she wants to cover her entire body.

Kati, 23, got her first inking at the young age of 15 – and she hasn’t looked back ever since.

Now, she has a growing following online, @kati_777_, where her almost 10,000 fans love to watch her body art progress.

Speaking to the Daily Star, the German bombshell said: “When I was 15, I had my mom's date of birth tattooed on my collarbone and shoulder.

“After lengthy discussions [with her mum] it was a compromise so that I stopped piercing myself!”

Kati graduated high school and worked at a bar and then an insurance company before turning her hand to ink.

Now, she has been a tattoo artist for almost three years.

Kati explained: “I always painted as a small child.

“Already at the age of 11 it was my dream to work in the profession and to be fully tattooed myself.”

And, the tattooist can’t even put a figure on how much cash she's splashed on her body art over the years.

Kati noted: “With [tattoo artists] there is a give and take, we tattoo each other plus I tattoo myself too.

Currently, Kati has black and grey tattoos all down her leg, chest, stomach, neck and arms.

But, her plan is to cover her whole body in designs.

Kati us: “My whole body should be full, I only want something subtle on my face.

“I have been planning lettering on the hairline there for a long time, whether and when I will do the tattoo is unclear.”

But, it’s not always easy for the artist to go under the needle as unlike some ink addicts she doesn’t enjoy the feeling of the tattoo gun.

Kati explained: “I don't like being tattooed at all – it always hurts, but the top spots for me were my stomach, back of the knees, buttocks and armpits.”

And, much like most people with an alternative style, Kati’s tattoo certainly attract attention.

She said: “The reactions are always completely different and unexpected.

"But I rarely hear negative things.

“Even if you think older people are averse, they are often fascinated and totally cute!”

Previously, a tattoo fan with £7,000 worth of ink admitted that people often think she's a 'gang member'.

In other news, people think an artist who has tattooed her face and eyeballs has 'gone too far'.

For more stories from the Daily Star, sign up to one of our newsletters here.