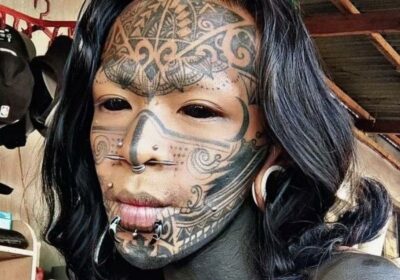 A heavily tattooed woman who has faced discrimination for her extreme look has opened up about the meaning behind her tattoos and addressed her parents’ shocked reaction.

Tattoos are often used as a way of expressing a person’s true identity, and this is certainly the case for Deedee Villegas who was born a man in the Philippines.

Deedee has since transitioned to live as a female, as well as decorating her body from head to toe with intricate designs.

And, after revealing that she had been subjected to discrimination over her looks while graduating from university, the tattoo fanatic revealed that she had used her ink to protect herself against high school bullies.

“At first, I thought having a tattoo would just make me look cool, like if I have a tattoo then no one would bully me anymore,” she confessed.

When Deedee started studying fine art at college, she realised that her beliefs aligned with the ancient Filipino attitudes towards tattoos.

Now heavily tattooed as well as sporting some extreme facial piercings, Deedee delved into the meaning behind the face tattoos that she had started with in 2013.

“My first tattoos on my face are a cross and a moon,” she began.

“Actually, almost everything on my face deals with deaths of friends and family. But my logic at the time was I want to have a tattoo somewhere painful, just to remind me how painful it was to lose a loved one.

“And I think I chose the face to also remind myself that it’s fine because whatever pain it is, you can face your problems.”

Deedee also admitted that the eye injections she had required to turn her eyeballs jet black had been painful, but joked: “I can still find handsome men… So I think it's still fine.”

And, despite facing judgement from others during her daily life, the body ink fanatic stressed that her tattoos had helped her to embrace her true identity.

“I see somebody who’s strong, independent and fulfilled,” she said, before noting: “When it’s Halloween, I’m happy because I’m instantly in costume.”

In fact, Deedee revealed that her parents had been accepting of her transformation despite their initial shock.

“The normal reaction of parents is of course to be shocked, but so far they haven’t reprimanded me for it,” she explained.

“They were just worried about what I was getting myself into, ‘are you doing drugs now?’… Every year we had an annual meeting, ‘where are we at now? What’s our progress? Why is it increasing?’

“I’m just so lucky to have such good parents, maybe if we didn’t have those yearly meetings, I’d be lost.”