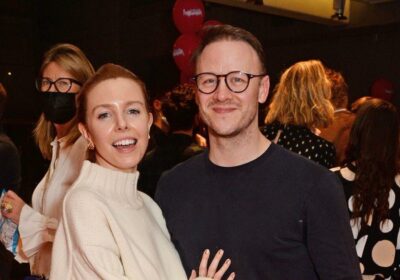 Stacey, 35, shared the news to her Instagram account alongside a picture of herself holding her blossoming bump with proud dad to be Kevin, 39, also sharing an image to his account in celebration of their baby to be.

The pair, who met on the 2018 series of the show, went on to win the BBC show together that year. As they gear up to become parents, we take a look at the other Strictly Come Dancing stars who have also welcomed a child together.

Gemma Atkinsonappeared on the 2017 series of Strictly Come Dancing, and despite not being partnered with Gorka Marquez, the pair hit it off.

Two years after the show the paid welcomed their daughter Mia into the world and have been a besotted family since.

Three days after Mia’s birth, Gorka went on Loose Women and said: "Just three days and it feels like three years. Joking, joking. I just wanted to say it's been amazing, it's so rewarding. Thank you to everyone for your lovely messages and support. It's been incredible."

The pair are still in love as ever now, and got engaged on Valentine’s Day in 2021.

Countdown presenterRachel Rileyappeared in the 2013 series of Strictly alongside Pasha Kovalev.

In December 2013, just one month after Rachel announced her split from husband Jamie Gilbert, she and Pasha started dating.

In December 2019 the pair welcomed their daughter Maven into the world and two years later Rachel gave birth to Noa.

Rachel and Pasha got married in Las Vegas in June 2019.

Professional dancerKristina Rihanoffwas partnered with Ben Cohen for the eleventh series of the dancing competition in 2013, and decided to continue their bond once the show ended.

Ben – who was married to ex-wife Abby Blayney at the time they met – and Kristina announced they were dating and went public with their romance soon after the series ended.

The former rugby star was already a dad to twin girls Isabelle and Harriette, who he shares with Abby.

The couple then announced the birth of their daughter, Milena Rihanoff-Cohen in 2016, shortly after Ben and Abby had finalised their divorce.

Professional dances Ola and James Jordan had been dancing together before they joined the Strictly Come Dancing lineup.

The pair married in 2003 and are now parents to two year old Ella who they welcomed via IVF.

Amy Walsh and Toby-Alexander Smith are technically not Strictly stars… but the pair did meet in the audience of the show in 2019.

Toby was there supporting his co-star Emma Barton, Amy was cheering on her former castmate and eventual winnerKelvin Fletcher, with her singer sisterKimberley Walsh.

Their daughter Bonnie was born in December 2021 and thepair recently announced their engagement.