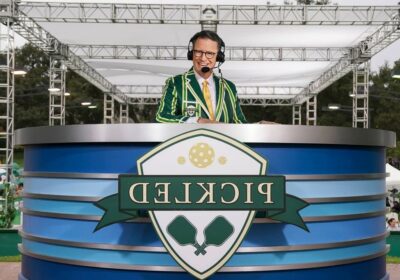 With pickleball all the rage and the demand for sports programming growing fiercer by the day, CBS has teamed up with Colbert and Funny or Die to produce a celebrity tournament airing Nov. 17. The two-hour event might seem like a goof — and remind viewers old enough of “Battle of the Network Stars” in the ’70s — but it carries serious ramifications for an industry increasingly reliant on sports in all its forms.

In “Pickled,” Colbert joins with sportscasters Bill Raftery and Cari Champion to comment on pickleball antics featuring everyone from Sugar Ray Leonard to Will Ferrell and Emma Watson. According to Colbert, who began playing the racket sport in January, the rivalries in the taped tournament are intense: “You don’t get to be fully employed in Hollywood unless you are competitive, and these people are out for blood at all times.”

So too are the networks that might air such programs. In an era when more people are turning to streaming, sports is the one category that seems able to lure the masses to linear TV. The trouble? Sports rights fees have grown from exorbitant to stratospheric, and many traditional media companies are pushing themselves to the financial edge to keep live games on their screens.

With that in mind, networks are looking beyond traditional league play. Warner Bros. Discovery has found some traction with “The Match,” a celebrity golf tournament that often features top football players. Paramount Global’s Nickelodeon experimented with a “Slime Cup” golf event this past summer. “It’s really about controlling and owning intellectual property versus leasing it, which is what the networks typically do with live sports,” says Daniel Cohen, EVP of global media rights consulting at Octagon, an Interpublic Group sports management firm.

Pickleball has been on the verge of becoming something of a national pastime. More than 4.8 million people in the U.S. play the sport, growing 39.3% over the past two years, according to the Sports and Fitness Industry Association.

Participants in “Pickled” took the charity contest seriously. “I think Emma Watson is going to surprise a lot of people,” teases Colbert. “Dierks Bentley is going to have a few tricks up his sleeve.”

Combining comedy with sports also has appeal to Funny or Die, which is competing against Netflix and TikTok for eyeballs. “The thing about a sport is if you do it right, people do want to stick around and see who wins,” says Joe Farrell, chief creative officer of Funny or Die. “Pickled” might also lend a boost to people who like to produce laughs. Comedy fans can find it everywhere, whether it be in specials on Netflix or soundbites on TikTok, which makes the task of producing a viable comedy program more difficult, Farrell suggests. One solution: Make the jokes part of a game.

Even Colbert learned a few lessons from “Pickled.”  When he does a live broadcast of CBS’ “The Late Show,” he basically knows where the program is supposed to go. But with sports, no one can predict where the action might take the crowd. “It is extraordinarily complex and challenging,” he says. “There are so many elements, so many cameras.”

Perhaps it’s all worth it. Both Colbert and Farrell say they are open to doing more events like this, possibly tying the tournaments to holidays or special causes. As long as sports programming is in such demand, the two may just have to keep on swinging.