Staff 'lost in admiration' for Princess Anne after Australia tour 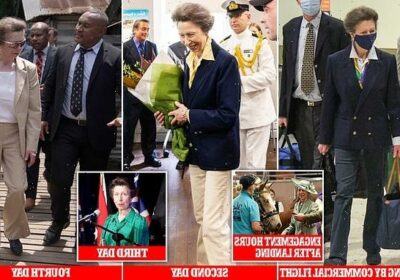 Still the hardest working royal! Princess Anne, 71, packs in more than 20 engagements on 4-day Australia and Papua New Guinea tour, travels with one aide and gets by on a few hours sleep (and even does her own hair)

At the age of 71, she is certainly a chip off the old block.

About to set off home from a whirlwind trip to mark her mother’s historic Platinum Jubilee to Australia and Papua New Guinea, the Princess Royal has travelled almost 25,000 miles on commercial airlines in less than a week, packed in more than 20 engagements over four days – without a single evening off – and even led the way staying in £185 hotels.

If that wasn’t frugal enough, she has been accompanied by just one member of office staff (in addition to her husband and their security detail), been doing her own hair and make-up – and even packed her own suitcase.

Famously no-nonsense Anne has always been the child most like her parents, getting stuck in with minimal fuss. 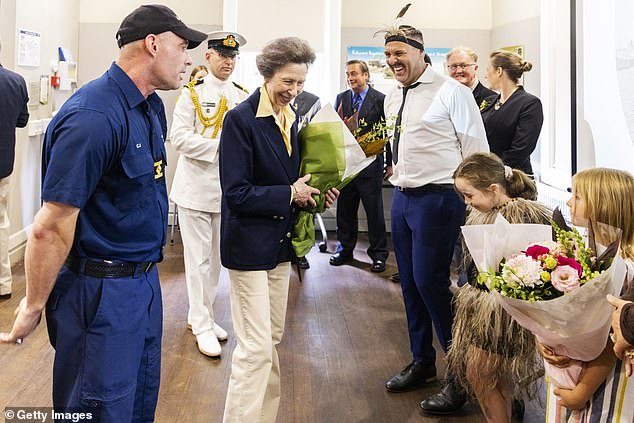 Princess Anne has left palace staff ‘lost in admiration’ after she packed in more than  20 engagements over whirlwind four day Jubilee trip to Australia (pictured, visiting the Sea Heritage Foundation earlier this week) 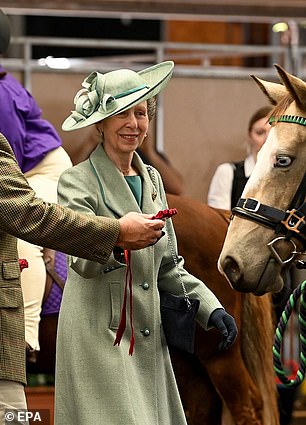 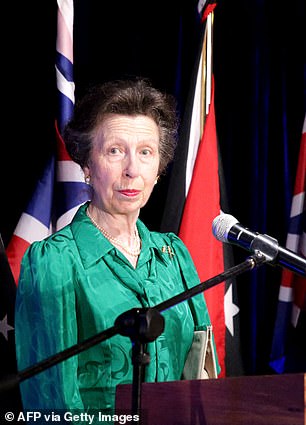 During the trip across the world, the royal has stayed in budget hotels and travelled with just one member of staff (left, meeting Riding for the Disabled Association NSW (RDA) horse riders in Sydney, and right, speaking at a reception for business leaders and politicians in Port Moresby) 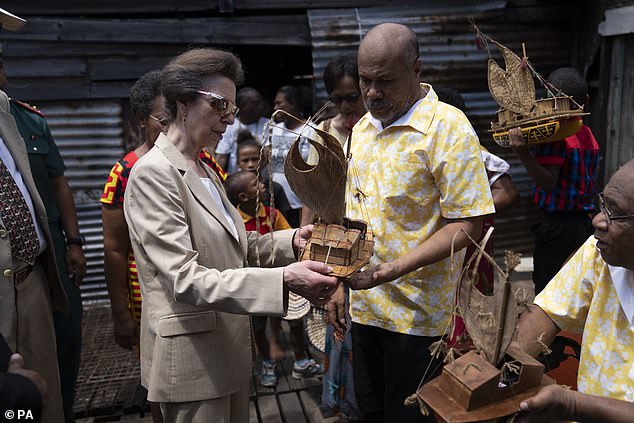 The royal has spent several days in Australia before travelling to Papa New Guinea on behalf of the Queen in celebration of the Platinum Jubilee (pictured, visiting Hanuabada Village)

Despite being five years over the official age of retirement she is annually one of the hardest working members of the royal family, representing the Queen both at home and abroad, attending state and ceremonial occasions, conducting investitures and supporting more than 300 charities, organisations and military regiments.

To mark the Queen’s historic 70 years on throne, she was asked to represent her by visiting Sydney and Papua New Guinea, where the Queen is still head of state.

Her odyssey started on Thursday last week following a full day of engagements in Liverpool (she had been in Aberdeen, Northamptonshire, Bath, London and Windsor in the preceding days) after which she flew by helicopter back to the capital and boarded a commercial flight to Sydney at Heathrow.

She was accompanied by her equally down-to-earth husband, Vice Admiral Sir Tim Laurence and just her private secretary Charles Davies. 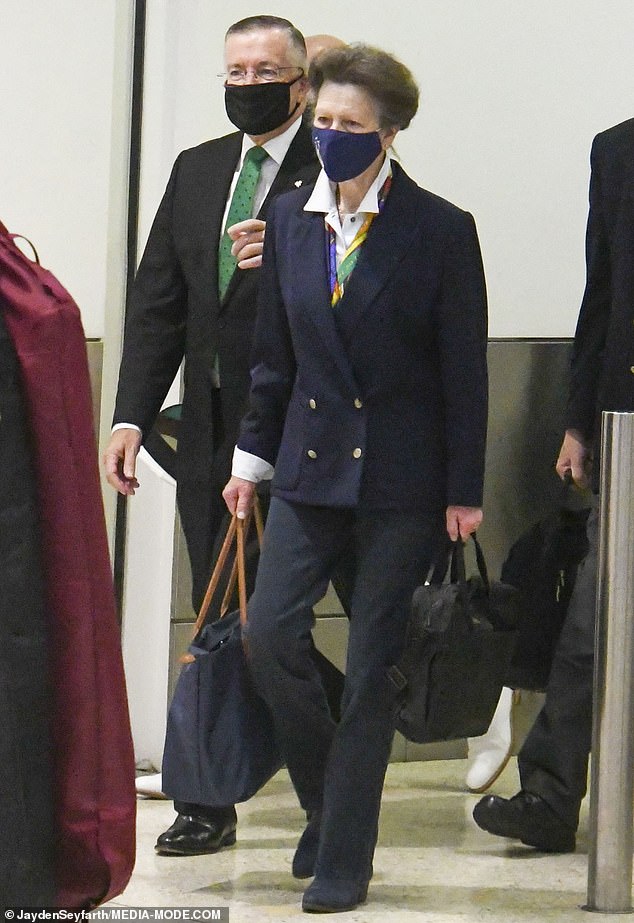 After flying all the way through to Australia without a stop-over on a commercial British Airways flight, Princess Anne arrived in Sydney at 5am on Saturday

The platinum jubilee tour in full

The Prince of Wales and The Duchess of Cornwall visited the Republic of Ireland from Wednesday 23 to Friday 25 March.

The Duke and Duchess of Cambridge visited Belize, Jamaica and The Bahamas from 19 to 26 March.

The Earl and Countess of Wessex will visit Antigua and Barbuda, Grenada, St Lucia, and St Vincent and the Grenadines from Friday 22 to Monday 28 April 2022.

Although, admittedly, her trips attract far less publicity than other senior royals, there were still no dressers, tour organisers or personal assistants.

After flying all the way through to Australia without a stop-over she arrived in Sydney at 5am on Saturday.

But her crammed diary allowed her barely a couple of hours to shower and change at her hotel, The Pullman Olympic Park, where rooms cost upwards of just £228 a night.

By 9.30am she was at her first engagement, an audience with the Governor of New South Wales, followed by a meeting with His Excellency General David John Hurley, the Governor General and the Queen’s official representative in Australia.

She spent the rest of the day – from 11.30am to 6.30pm – at the Royal Agricultural Society of NSW’s Bicentennial Sydney Royal Easter Show.

She was on her feet the entire time, viewing stands, displays and attending attending the opening ceremony, speaking to many local farmers about the challenges of living off the land after years of drought and floods. 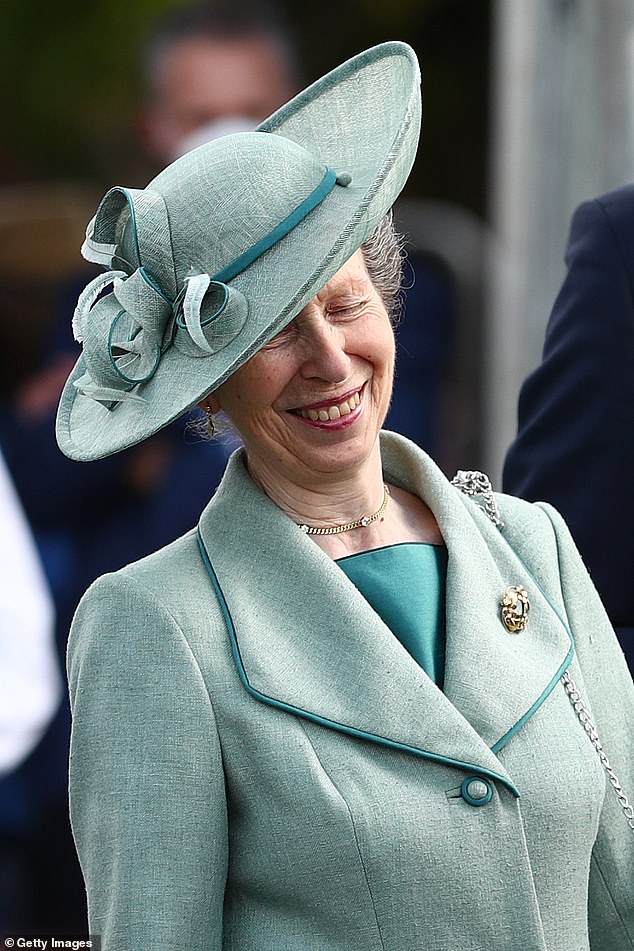 Hours after the Princess Royal landed in Sydney, she was opening the Bicentennial Sydney Royal Easter Show (pictured) 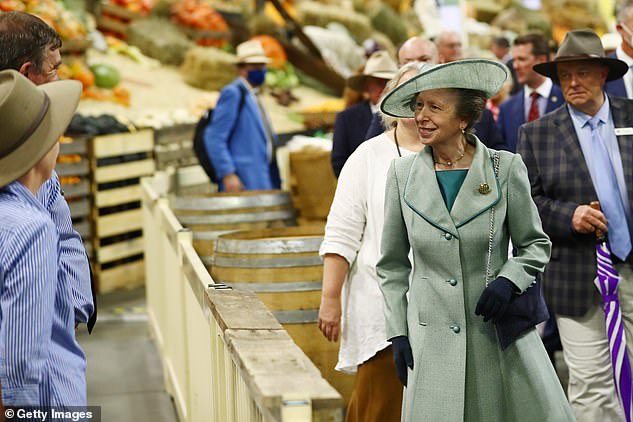 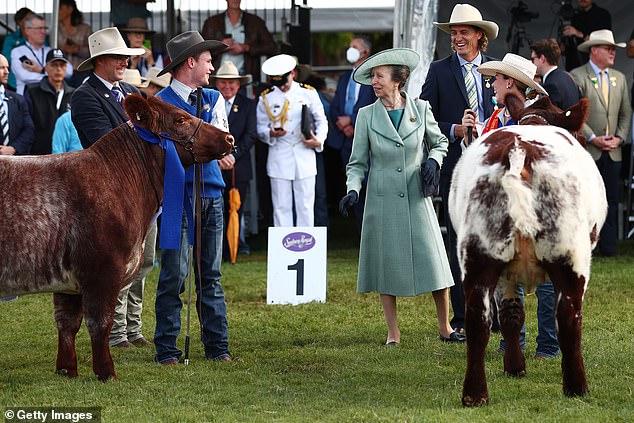 That evening she also attended a dinner at Sydney Olympic Park as guest of honour.

The following day was equally punishing as she visited representatives of the rural fire service and saw first hand the devastating effects of the recent bushfires and floods.

In the afternoon she took to the water for a visit to the Sea Heritage Foundation and finished her day with conducting an investiture followed by a garden party with representatives from many of the charities she is patron of.

Monday saw Anne pack in engagements in both Sydney – where she undertook military engagements and inspected a guard of honour – and Papua New Guinea where she met the nation’s prime minister, His Excellency The Honourable James Marape, and attended a reception with business leaders and politicians. 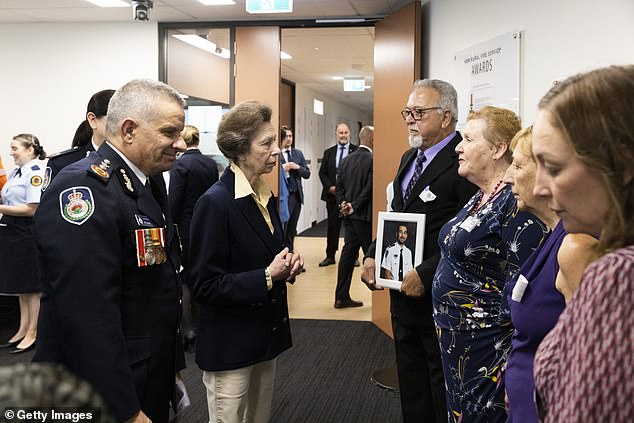 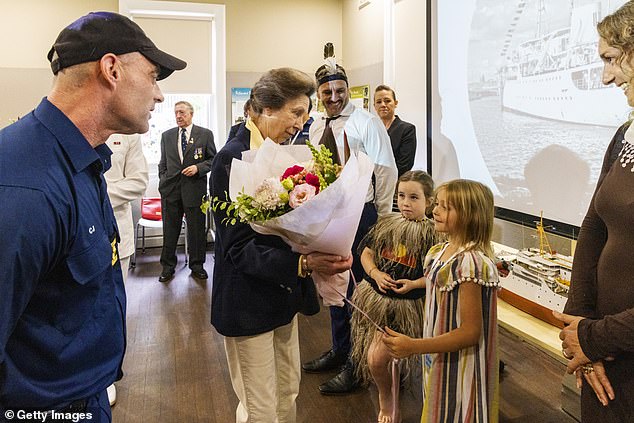 Her day still wasn’t done as she also had a dinner with the prime minister and representatives from across the country’s government.

In Papua New Guinea the Queen is known as ‘Missis Kwin’’ or ‘Mama belong big family’ in Tok Pisin and is still fondly regarded.

Today, her last day, saw Missis Kwan’s daughter thunder through eight official engagements including a visit to an all-girls boarding school and the country’s first cardiac diagnostic centre, as well as meetings with village elders in Hanuabada and undertaking a tour of the Bomana War Cemetary to lay a wreath on behalf of the Queen in honour of the 3,824 Commonwealth soldiers buried there. 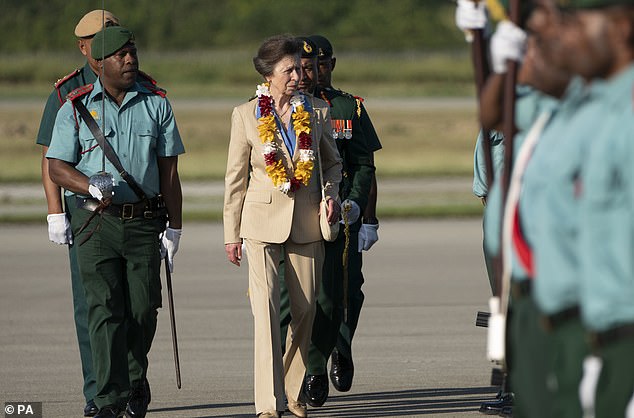 The Princess Royal (pictured, centre), was snapped inspecting a Guard of Honour on her arrival at Jackson International Airport in Papua New Guinea on Monday 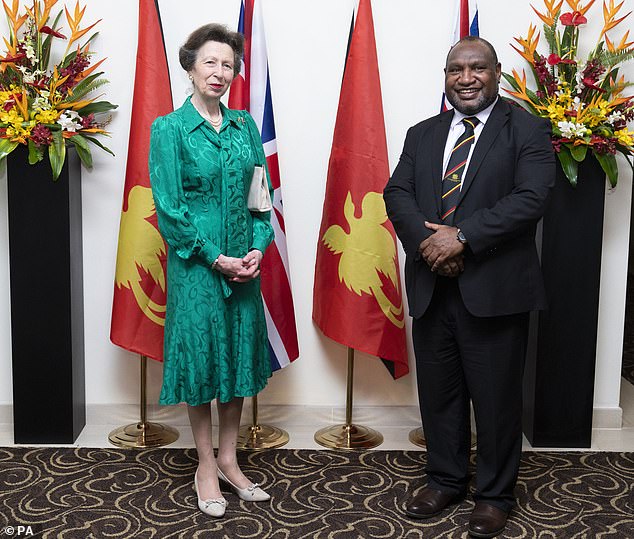 Her final engagement, another dinner with the country’s Prime Minister and charity representatives, ran so late that she will have just enough time to catch a few hours sleep at her £185- a night hotel, which will not be named for security reasons, before catching a connecting flight back to Sydney on straight on to the UK.

While the pensioner princess is widely respected by palace staff for her astonishing workload, the punishing schedule of her latest trip has left them lost in admiration.

There has been debate in recent weeks, particularly following the Cambridges’ visit to the Caribbean, which was criticised for perpetuating ‘colonialism’, about how royal tours should be conducted.

But Anne has shown that royal visits abroad are still very relevant in this day and age.

‘It’s quite unbelievable,’ said one, ‘she literally hadn’t stopped flogging herself from the moment she left the UK. And to think she will turn 72 this summer. Remarkable.’ 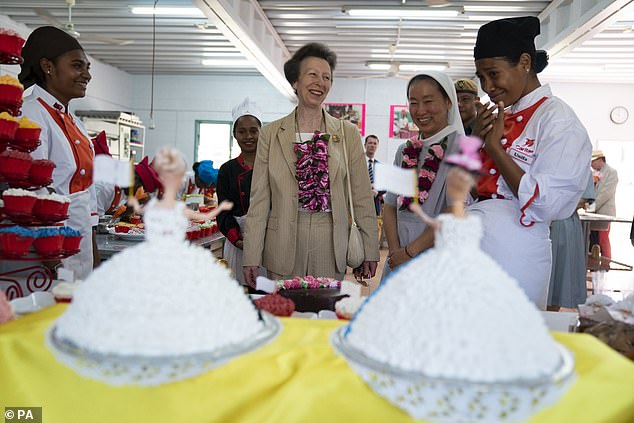 Today, her last day, saw the Princess Royal thunder through eight official engagements including a visit to an all-girls boarding school (pictured) 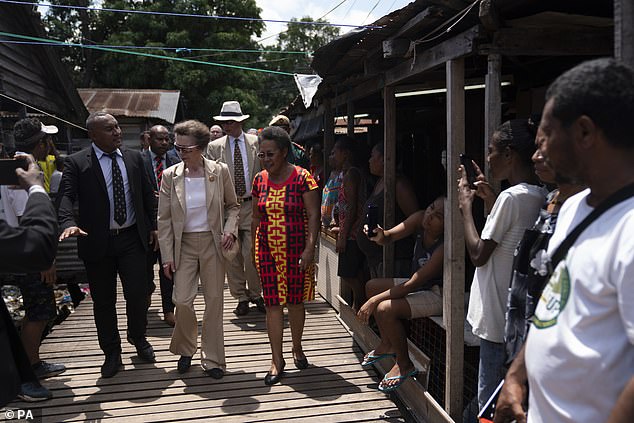