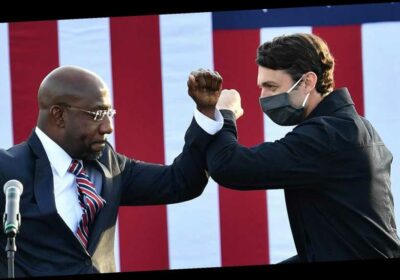 Georgia's crucial runoff election on January 5 looks to be a major victory for the Democratic Party.

On Tuesday night, Democrats appeared to have won both Senate races in the state, giving them control of the Senate. The Rev. Raphael Warnock won his race against Republican Sen. Kelly Loeffler, making history as the first Black senator to be elected from Georgia. Meanwhile, Jon Ossoff, is leading his race against Sen. David Perdue by about 16,000 votes, with nearly all ballots counted, and has declared a victory.

The apparent victories will give Democrats control of both the White House and both houses of Congress for the first time in 10 years, giving President-elect Joe Biden a bigger chance to enact his agenda.

As the races looked to be called in the Democratic candidates' favor, people credited Stacey Abrams as well as Georgia organizers for making the election results possible.

"I am an iteration and an example of the American dream," Warnock told CNN on Wednesday morning, adding, "When I think about the arc of our history, what Georgia did last night is its own message in the midst of a moment in which so many people are trying to divide our country, at a time we can least afford to be divided."

Though Ossoff's win has yet to be officially called, Politico estimated that the tally accounts for about 98 percent of the expected vote total, with the remaining 100,000 outstanding votes likely to favor the Democrats "significantly."

In a video message, Ossoff thanked supporters, assuring voters that he would prioritize COVID-19 relief upon taking office.

"Georgia, thank you so much for the confidence that you have placed in me," he said. "I am honored, honored by your support, by your confidence, by your trust, and I will look forward to serving in the United States Senate with integrity, with humility, with honor, and getting things done for the people of Georgia."

The race between Ossoff and Perdue has been projected to be called by noon on Wednesday.