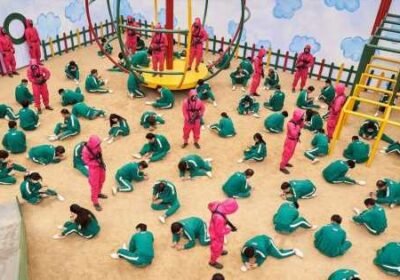 A real-life version of the Squid Game competition is currently underway after being inspired by Netflix's hit Korean series.

The thriller series is set in a dystopian-like world and sees 456 cash-strapped people of all ages compete for a cash prize of billions, gambling their lives in the process.

Anyone who's watched the show will undoubtedly have some curiosity around how they'd fare in the games, but the prospect of brutal murder is unsurprisingly enough to put us all off trying.

However, if you remove the violence, death and all other illegal elements from the show's competition games and envision a violence-free Squid Game, it actually sounds like a lot of fun.

The Korean Cultural Center (KCC) in Abu Dhabi decided to bring that vision to life and organised a brand new event to "match up to the worldwide popularity" of Squid Game.

Taking place today, October 12, 2021, the games will draw upon those played in the series, from Red Light, Green Light, to the tricky Dalgona Candy game.

Writing on their website, the KCC said: "To match up to the worldwide popularity of ‘Squid Game’, the Korean series on NETFLIX, Korean Cultural Center in the UAE has organized an event that you can also enjoy the games played in Squid Game."

Based in the United Arab Emirates, this event might've been a tad far away for us Brits, but here's hoping someone brings it over to the UK.

The event's organisers are running two sessions, where a total of 60 lucky entrants have the chance to try out the terrifying games.

Each session will accommodate two teams of 15, and will feature staff dressed in the infamous pink jumpsuits, along with circle, triangle and square masks.

Taking place at the KCC's Abu Dhabi office, the centre's director Nam Chan-woo has explained that entrants were selected after filling out an online form.

Those chosen were tested on their knowledge of the Netflix show and all lived within close proximity of the centre.

The website confirmed this, stating: "Only invitees with a green pass can participate in the event."

So, what's the prize? Unfortunately there aren't billions of Korean Won up for grabs, but there is a customised green Squid Game tracksuit, just like the one from the series.