Home » Sisi Stringer on 'Mortal Kombat'and Hypersexualized Bodies: 'It's not attainable for me or half the population.'

Sisi Stringer on 'Mortal Kombat'and Hypersexualized Bodies: 'It's not attainable for me or half the population.'

It’s not often that we get to see a Black woman play a fictional badass warrior princess who teleports. That’s exactly what audiences get in Mortal Kombat, based on the famous video game series, which introduces us to Aussie-bred actress Sisi Stringer.

Though she’s previously been seen in the 2020 films Children of the Corn and Bloody Hell, Stringer will be playing Mileena in the action film released this past Friday and is the first Black woman to do so in an Asian-dominated cast. As one of two Black characters, alongside Mehcad Brooks as Jax, Stringer recognizes the responsibility of representing young Black women who see her as a pillar of fearlessness and confidence on and off-screen.

Ahead of the Mortal Kombat premiere, ESSENCE caught up with Stringer about her role as Mileena, the importance of young Black girls seeing her play this kickass character, and the objectification of women in video games.

Did you watch the original Mortal Kombat movie or play the video games?

STRINGER: I played the video games a little bit because my friends were into it when I was in college, but that was Mortal Kombat 9. Not my favorites. That’s where Mileena is, essentially, wearing lingerie to fight people in, and worse, she’s basically naked in one of the scenes and that wasn’t my favorite, the objectified woman characters. In the last couple, the costumes have been a lot more badass and a lot more like she’s going into battle.

I really liked the Mileena character. Actually, I really, really like her. I played her a little bit in the swimsuit, but not much after that. A little bit here and there when I’m having a night with my friends, but I was never a huge Mortal Kombat gamer or gamer in general. I liked Paper Mario and The Thousand-Year Door on Nintendo GameCube. That was a favorite of mine. Otherwise, it’s just The Sims, basically. 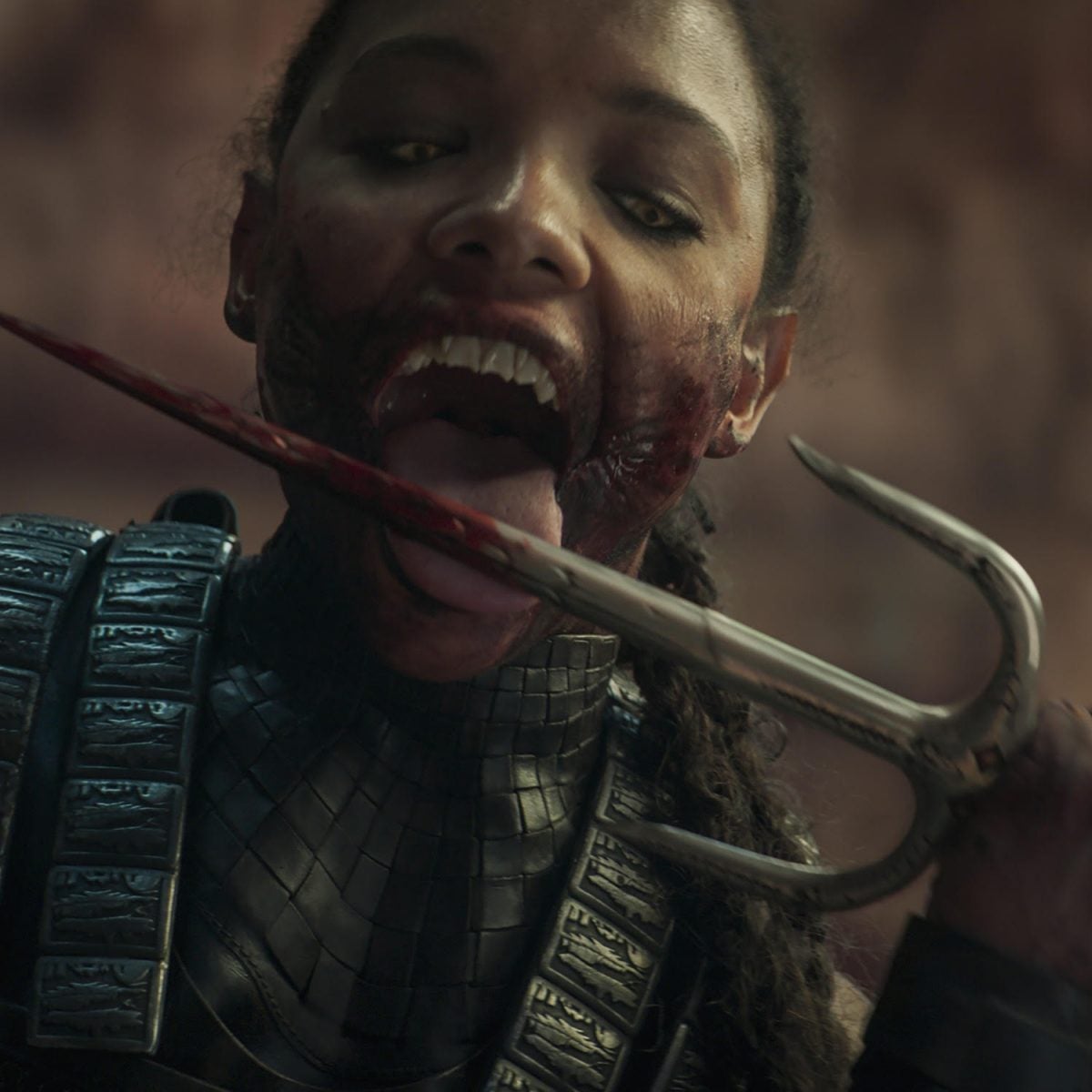 How did you get in character for Mileena?

STRINGER: I did a lot of research before the audition because if you’re given a brief and there’s a lot of information out there, then you want to gobble it up so that you can do your best. I watched a lot of YouTube videos, I played the games a few times with my friends, and then even more YouTube videos because there is so much out there. There [are] so many amazing resources on YouTube for this. I learned a lot from that – the backstory, the law, the themes, the origins, and stuff like that.

When it was announced that I got the role and I started getting lots of followers, those fans of the game would send me information. I think I got a 2000 word essay at one point just detailing Mileena, her inner life, her backstory, her timeline, and everything. I read that, and I was like, “Thank you so much because that’s really in-depth. That’s everything I need.” The fans would send me pitches and talk to me about it, which was really cool because they’re the people that are most passionate about it. You want to hear what they think of the character because they know the character so well.

STRINGER: I did about four months of martial arts training before. I grew up and I was a dancer for eight or 10 years so it was somewhat easy. Easy in some ways but still very difficult in some ways to pick up martial arts. I did Muay Thai, some kickboxing, and some gymnastics as well. I did a few flips here and there. In terms of getting into character, it would be just putting on the whole garb, everything. Starting with a blank face and then building it from there with the prosthetics, the scars, the contacts, and the hair. Getting strapped into this tiny, corsetted, hard leather costume. They’d yank me into it and I’d be all, (gasp) “Uh, uh.”

They give me my weapons and then I’d march on the set being like, “Yo, I’m so ready.” It feels really badass. My favorite thing was when they let me have the metal ones, not the rubber ones, and they’d be in my back and I would pull them out and this sound. It was incredible and I felt so badass every time. I would listen to a “Bury A Friend” by Billie Eilish and just walk and stalk the halls. That was my process.

What would you say were some of your favorite on-set memories from filming Mortal Kombat?

STRINGER: I get asked this question a lot, but there’s so many. When I say some, I feel bad for the others I didn’t mention. I really enjoyed playing Mortal Kombat with Joe [Taslim] in his trailer. That was really nice. I loved going on the wires and I was doing some flips. They strapped me in and I had kind of a rotating thing. Then I’d jump, they’d pull on the lines and I’d flip upwards. I was terrified, but I was like a kid excited to go on a bouncy castle. I was like, “Yes! Put me on the wire.”

One time this beautiful little child came on set and he would have been like five years old. I just was like, “Oh my God! There’s a child on set.” I went and talked to him because children just give me life and energy. They’re so honest, open, and vulnerable. As an actor, I think it’s a really good thing to interact with kids. I went up to him and he was kind of shy, but he was excited to be there. I gave him my rubber weapons and I let him sort of jab me in the tummy, and I would pretend to die. We took pictures together. That was a good day. 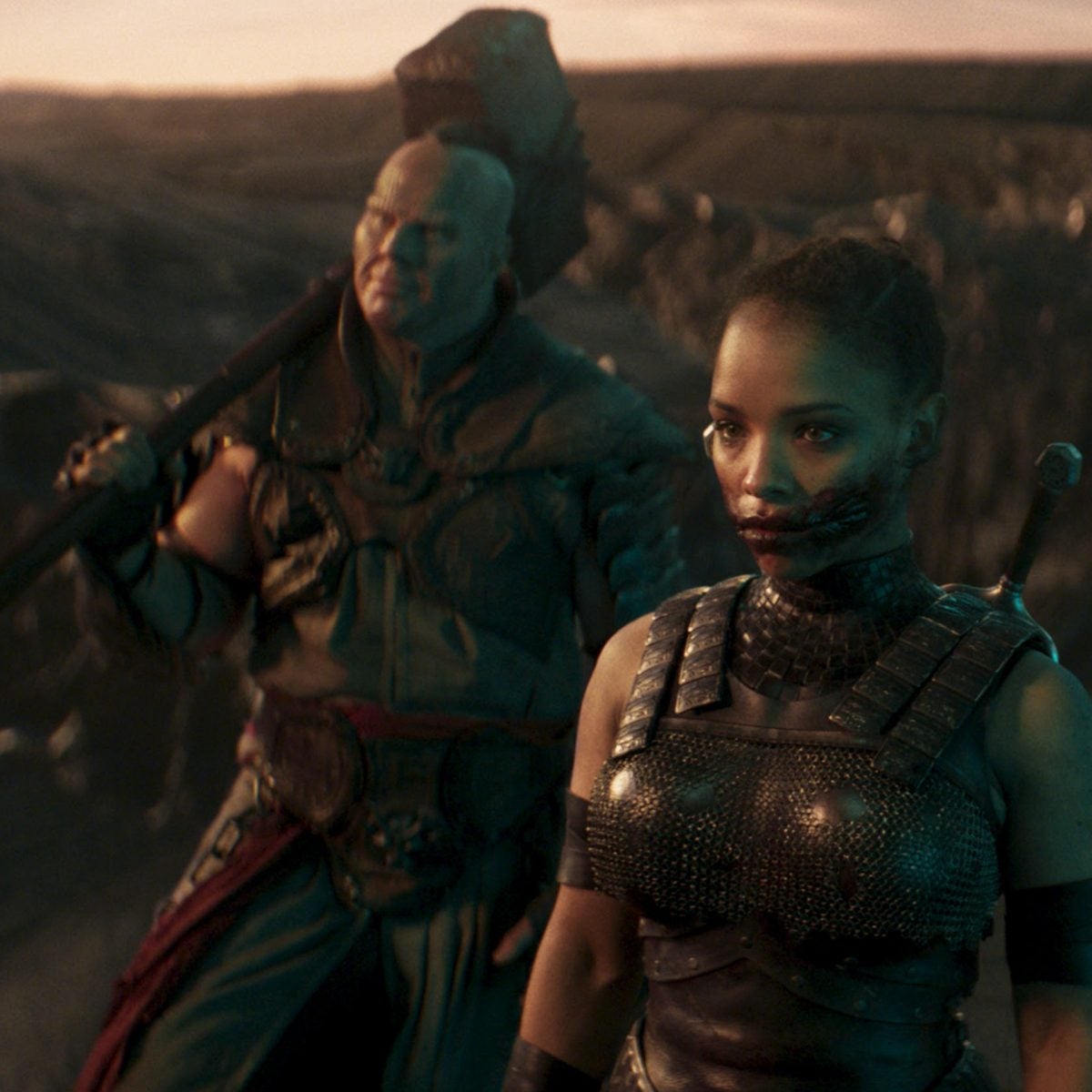 How does it feel as a Black woman playing such a badass woman on screen?

STRINGER: The way the industry’s changed in the last five years is really incredible. It has actually afforded me countless advantages in terms of castings for shows and films. We need diversity. Even if they’re doing it in a selfish way, it’s still diversity and they still have to do it right because if it’s just tokenism, people are like, “You tried diversity and you failed. You’re canceled.”

The best thing about it is that we’re in this cast and I’m one of two black characters and the rest are basically Asian men. Awful things are happening right now in America for Asian Americans. It’s not often that you can say, “I know how you feel.” Seeing somebody who looks like you, having violence and hate committed against them, but as Black people, I’m sure you understand. I actually do know how you feel. It’s definitely the time in the industry for Asian men and women to be portraying heroes, sex symbols, multifaceted 3D characters, and having authenticity.

We have this fabulous cast being led by Asian men and I just think it could not come at a better time, particularly for Asian Americans that are growing up and seeing this violence committed against people like them. They need something like this to say, “I could be a hero. I could be sexy. I could be classy. I could be complicated.” I’m actually really proud to be part of such a diverse cast. It’s what we need precisely right now.

How did you channel your inner badass when you were playing Mileena?

STRINGER: I am a very strong and, possibly, forceful person. Very strong-willed, and I don’t take a lot of bull. I’m very strong and secure in myself, my opinions, and my ideologies, and my beliefs. If people disrespect me, it’s not going to go down too good. If I care enough, I’ll tell you, but if I don’t care about you, I’ll just cut you out because I don’t have time to facilitate that kind of stuff anymore. I’ve been through it. That is a strength of mine that I feel I can bring to Mileena because if you cross her, you die, and I feel that. If you cross me, you won’t die, but you might feel like it. You never know.

How do you believe young Black girls will feel when they see you in Mortal Kombat?

STRINGER: They will feel represented, I hope. It’s important to show different body types. Obviously, I’m not a model size zero and I just think that’s really good particularly for young Black girls who see that and they can relate to that. Sometimes I find when I look at stars that are like the Instagram body or the model double zero body, it’s just not relatable. It’s not attainable for me or half the population. Seeing more general sort of body types is better, rather than seeing the extremes. I feel like that’s another aspect of seeing me as Mileena that young Black girls will be able to relate to and hopefully feel supported by.