Home » Lifestyle » Should I still be proud of a drunken moment I got away with 40 years ago?

Should I still be proud of a drunken moment I got away with 40 years ago? Q: As a 17-year-old, I took the red rattler to the big smoke to watch a VFL game. Had a few too many beers and, not used to the lurching tram ride from the G, I parked a tiger onto the windscreen of the car stopped at the traffic lights. As a 58-year-old, should I still feel slightly proud at getting away with it?
M.T., Wangaratta, Vic 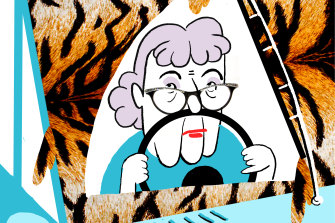 A: Sorry, but I have no idea what’s going on here. I’m not fluent in ’70s Wangarattan, so your question is a bit confusing: the only words I fully understand are “the”, “a few beers”and another “the”. But using careful linguistic analysis, I’ll attempt to translate this into modern English.

From what I can gather, when you were 17 you took a ride on the “red rattler”, which is either a train or a colourful sex toy – nobody’s judging, both can get you “to the big smoke”. Then you watched a bit of footy and caught a tram “from the G”, which is obviously the Melbourne Cricket Ground, although it could be the Gabba in Brisbane or it might be the Guggenheim in Bilbao – I’m not 100 per cent sure where you are.

Anyway, you’d had too many beers, the tram ride made you nauseous, so you “parked a tiger” on a windscreen – which I’m assuming is slang for vomiting, though it may have been a Richmond Tigers supporter whom you didn’t like. Whichever it was, think of that poor driver who had to clean their windscreen with their wipers: chunder would have smeared, and a supporter probably wouldn’t even shift. This is nothing to be proud of: you should have jumped off the tram, apologised to the driver, and found rags and water to help clean their windscreen. Maybe a stick if the supporter really wouldn’t budge.

To read more from Good Weekend magazine, visit our page at The Sydney Morning Herald, The Age and Brisbane Times.