Shoppers say the Woodmansterne calendars sold by retailers such as John Lewis have now ruined the countdown to December 25. 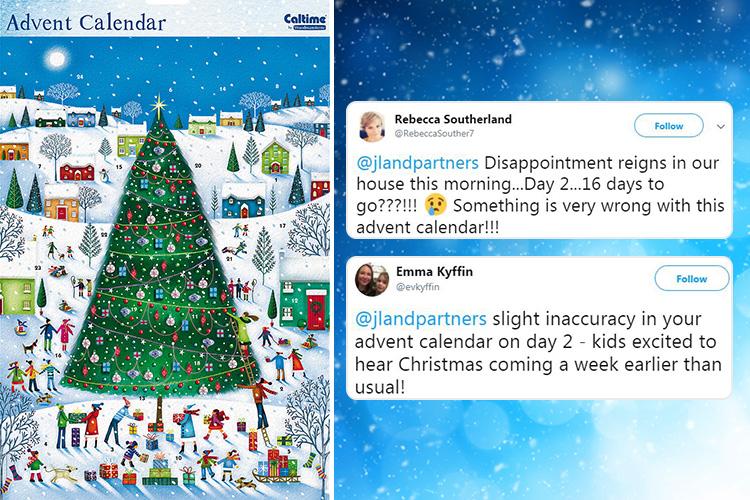 Customers who opened the December 2 door of the calendar yesterday were told that the big day is not on December 25, but instead a week early on December 18.

Helen Ward took to Twitter to write: “Hey @jlandpartners – my advent calendar is disappointingly telling me there’s 16 days to go?!”

Expecting more festive fails, one buyer opened all the other doors ahead of the right day only to find even more errors.

Another Twitter user called the wrong dates a “slap in the face” for those who had forked out £5 to purchase the illustrated calendar.

But not all shoppers were disappointed – Twitter user Emma commented how her little ones were excited to hear that Santa will be coming earlier than usual.

Manufacturer Woodmansterne, which supplied the calendar to a number of retailers, including John Lewis, has since issued an apology on Twitter.

John Lewis told The Sun: "We're so sorry for the disappointment caused when customers opened up this advent calendar.

"The supplier is working closely with us and other retailers to put this right as quickly as possible, and for any customer who has bought one of these advent calendars from John Lewis we will offer them a full refund."

The legendary singer is said to have been paid £3.9million for the ad – and the retailer is now urged to hire a budget filmmaker for its next advert after he made a tear-jerking Christmas viral video for just £50.

Meanwhile, Waitrose has mocked John Lewis by showing a girl's parents fast forward through the Elton John-starring spot so they could eat a cake.