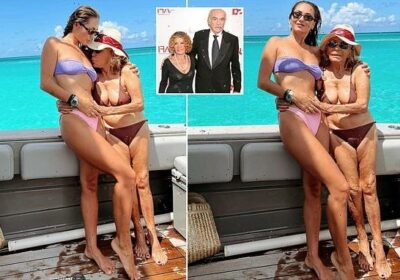 Bond girls! Sean Connery’s widow, 93, joins his socialite granddaughter Saskia in a rare snap as they pose in their bikinis in the Bahamas

Sir Sean Connery’s widow has joined his socialite granddaughter to pose for a rare family snap as they lapped up the summer sun in the Bahamas.

Lady Micheline Connery, 93, could be seen reclining on a boat alongside her granddaughter Saskia, 26, in the Bahamas, where she lived with the James Bond star until he died in 2020 aged 90.

In the snaps, which Saskia shared on Instagram, the two women leaned into one another as they posed in their bikinis while looking out onto the turquoise water.

When Sir Sean died, Micheline, a Moroccan-French painter who was Connery’s second wife, said: ‘He was my life for so long and I am grateful for the wonderful life we had together. But it is not the same for me now.’

Sir Sean Connery’s widow Lady Micheline Connery, 93, has joined his socialite granddaughter Saskia to pose for a rare family snap as they lapped up the summer sun in the Bahamas together

Born Thomas Sean Connery into a working-class family in Edinburgh’s Fountainbridge district, he left school at 14 and got a job as a milkman.

A variety of other jobs followed, including as a labourer and lorry driver, and then a stint in the Royal Navy before a medical discharge.

He became interested in bodybuilding and it was a visit to London in 1953 to enter the Mr Universe contest that kickstarted his acting career.

The future James Bond star took the opportunity to audition for a West End production of South Pacific and landed a part in the chorus. Further stage roles followed and he also broke into television and film, eventually winning a prominent role in the 1959 Disney film Darby O’Gill And The Little People. 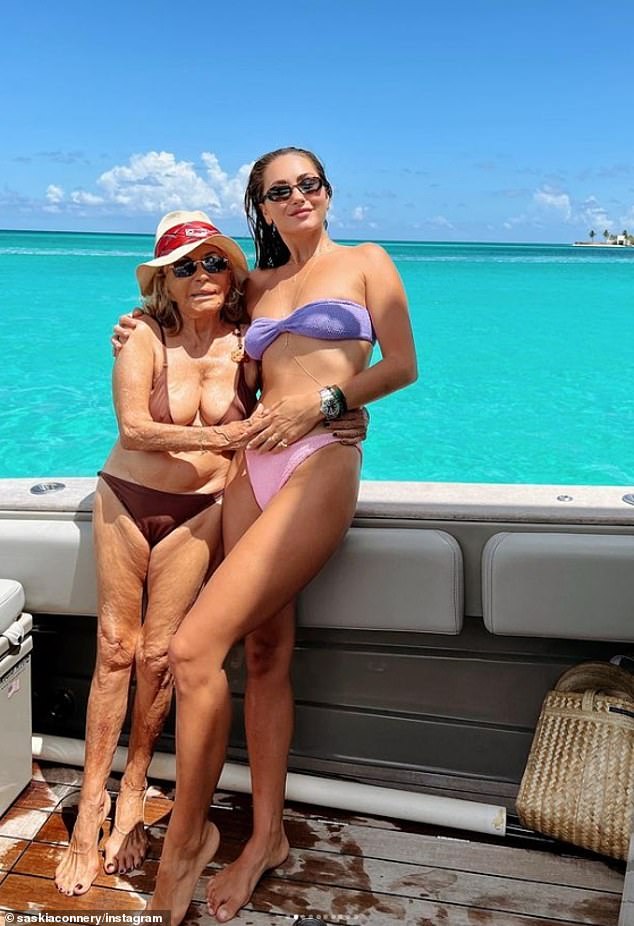 In the snaps, which Saskia shared on Instagram, the two women leaned into one another as they posed in their bikinis while looking out onto the turquoise water

But it was being cast as 007 that catapulted him to international stardom and acclaim.

Worth an estimated £266 million at his death, his private life was often as eventful as his on-screen one and he was seldom far from controversy. His first wife, Australian actress Diane Cilento, claimed in her autobiography that he resented her success and ‘wasn’t able to cope’ with his own fame. She accused him of physically and mentally abusing her, describing an incident in which he allegedly knocked her to the floor twice in a Spanish hotel room in 1964.

Connery fiercely denied the claims, branding his ex-wife an ‘insane woman’ who had never got over their divorce. But he later sparked more controversy by telling Playboy magazine: ‘I don’t think there is anything particularly wrong about hitting a woman – although I don’t recommend doing it in the same way you’d hit a man.

His marriage to Micheline survived his roving eye, including a seven-month affair with British pop star Lynsey De Paul. 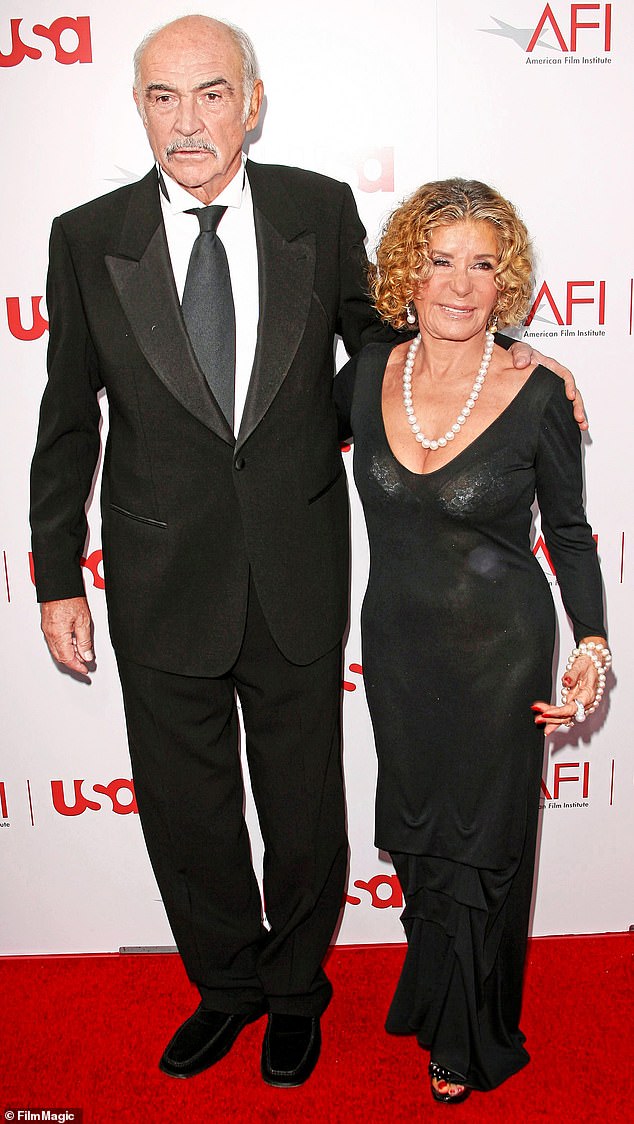 When Sir Sean died, Micheline, a Moroccan-French painter who was Connery’s second wife, said he had been her ‘life’

But in later years he instructed his agents to turn down all acting work and retreated into life in New Providence in the Bahamas with Micheline. According to Hollywood sources, producers always offered him ‘wheelbarrows full of cash’ to make a cameo in whatever movie they were making, but ‘he just wasn’t interested’.

Saskia is a fashion entrepreneur and influencer with over 12,000 followers on Instagram.

She reportedly splits her time between the USA and the Bahamas, but regularly shares snaps of her adventures across every corner of the globe, from Paris to London.

The granddaughter of the former 007 star attended school in the States before going to college in Paris, where she graduated in 2017.

As well as enjoying poetry, photography, spearfishing and tennis, the socialite also spends time volunteering at a Bahamian school for underprivileged children on the island.

On her LinkedIn page, she describes herself as having a ‘unique passion and energy’ which she brings to ‘everything she does.’

She wrote: ‘Having lived in The Bahamas, London, New York and Paris, and having traveled extensively elsewhere, I easily connect, am familiar and sensitive with people of all ages, cultures, religions and nationalities.

‘I am a fast learner and very intuitive especially when it comes to fashion creativity, marketing or public relations.

‘I am full of innovative ideas and love to learn and capture the most I can from opportunities and work with others.’

Saskia recently revealed she was making a swimwear line after feeling frustrated about the lack of options in the market.