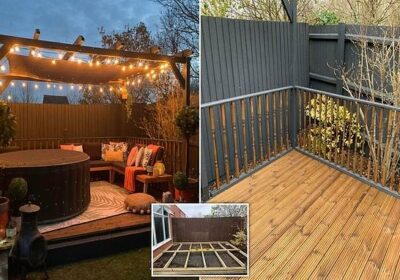 Savvy mum who was quoted £3,000 for decking builds a seating area and pergola herself for £450 – using ready-made kits and old bannisters her neighbours were throwing out

A creative mum has shared a garden renovation project that transformed her outside space into a sunny haven.

Melissa Preston, 44, a mum-of-two from Northampton, wanted to spruce up her garden, but with costs being extortionate, she decided to build a pergola and decking area herself.

After being quoted a staggering £3,000 by professionals Melissa, who owns a cleaning company, managed to pull off the project for just £540.

Her clever money-saving tricks included using a neighbour’s old decking, bannisters and handrails that were destined for the skip, and repurposing old furniture she had bought years ago from Lidl and Aldi.

Melissa told money-saving Facebook group DIY On A Budget UK: ‘After being quoted almost £3,000 to have a new decking area I decided to save the money and do it all myself at a fraction of the price. 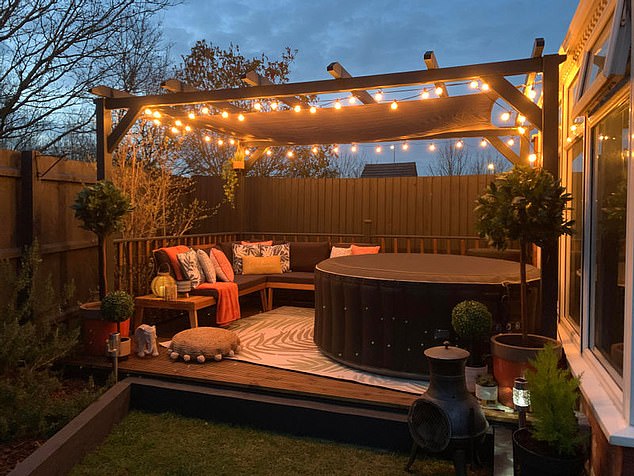 Melissa Preston, 44, a mum-of-two from Northampton, wanted to spruce up her garden and built her own pergola and decking area for just  £540 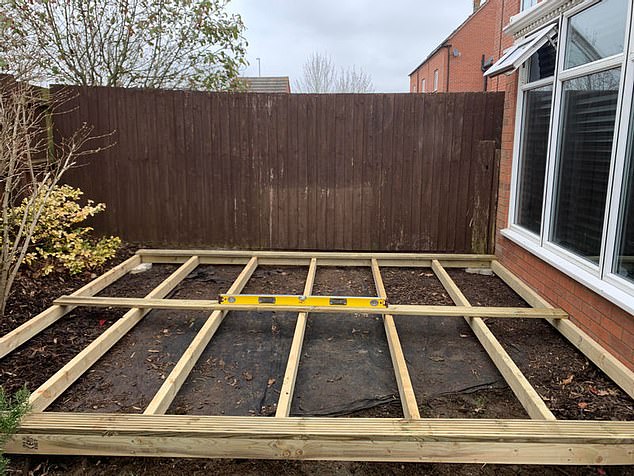 The project was the first of its kind she had ever tried. Once she made the base she spent hours making sure the posts that it would sit in were completely level 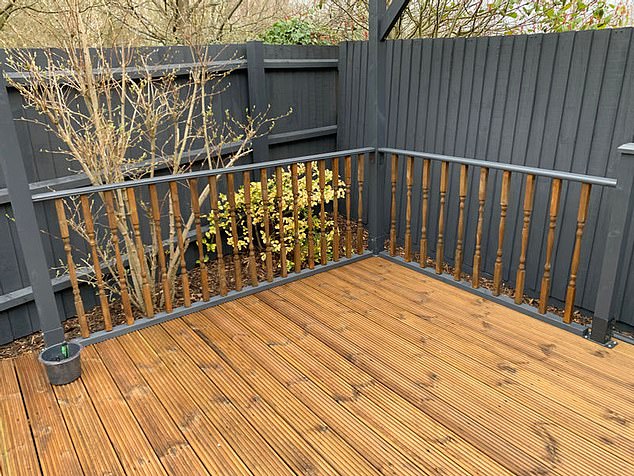 ‘I was fed up with the girls dragging bark into the hot tub!

‘My first task was to decide how big I wanted the decking. Once this was decided I ordered all the decking and the pergola.

‘The longest and toughest part of the project was getting the area cleared and de-weeded. This seemed to take forever.

‘Once it was all up to scratch I was then ready to start the build. 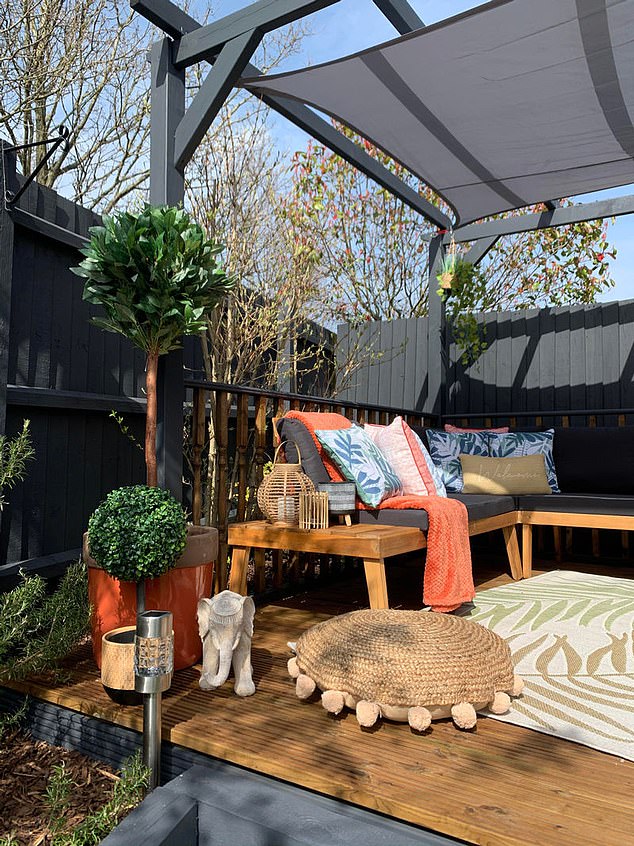 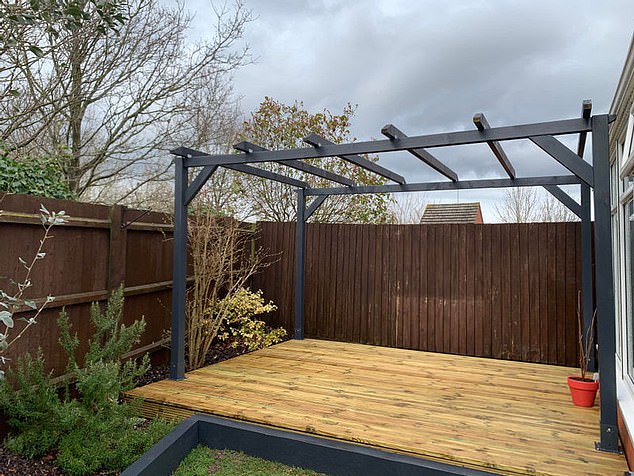 ‘I was very nervous as I’ve never tackled anything on this scale before, let alone done the whole thing myself.

‘But I do like a challenge so this spurred me on.

‘Once I had made the base I spent hours making sure the posts that it would sit in were completely level. 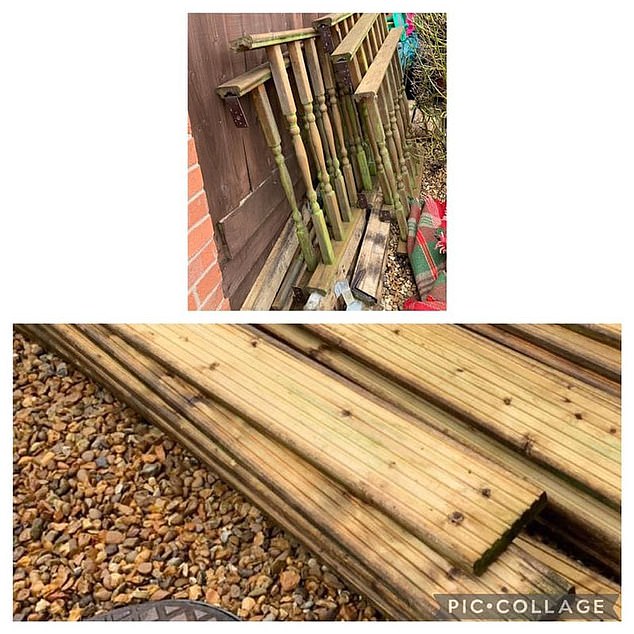 Her clever money-saving tricks included using a neighbour’s old decking, bannisters and handrails that were destined for the skip, and repurposing old furniture 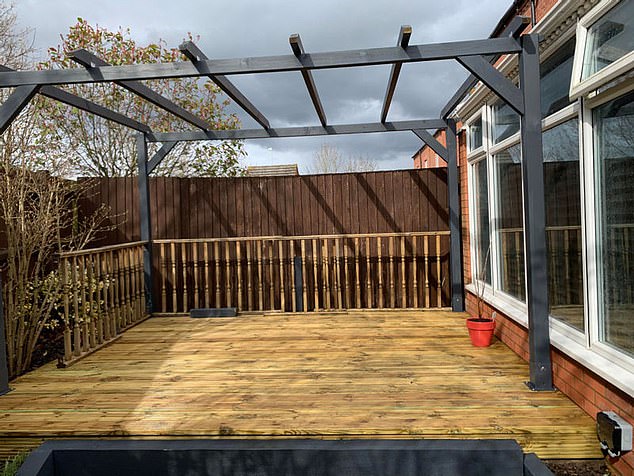 Melissa erected the pergola all by herself, which she found easier than creating the foundation for the deck

‘When using cement I will say it’s a great idea to mix it right near where you are using it.

‘I made this mistake and by the time I walked it around it already started to go hard.

‘Once the hard bit was all done I was ready to lay the decking.

‘I found this easy and really satisfying to watch it all come together. I then erected the pergola singlehandedly. 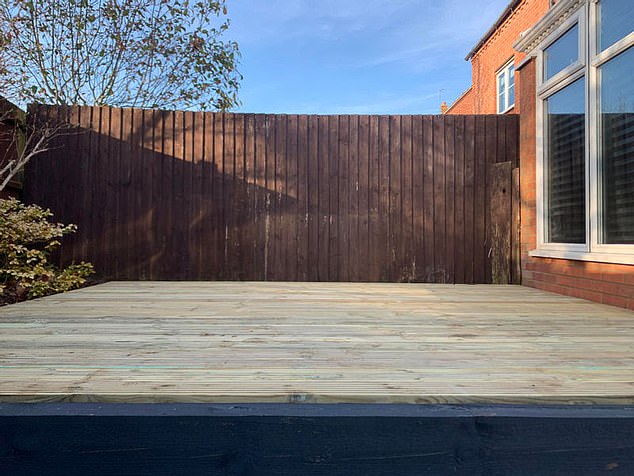 ‘I’d say maybe get someone to help with this part as it would save time and your frustration.

‘I saw that my local neighbour was going to skip their old bannisters, decking and rails, so I asked if I could have them and they agreed.

‘It saved them a trip to the tip.

‘I hadn’t originally planned to put a railing up but I thought these would be ideal and really showcase the rest of my work. 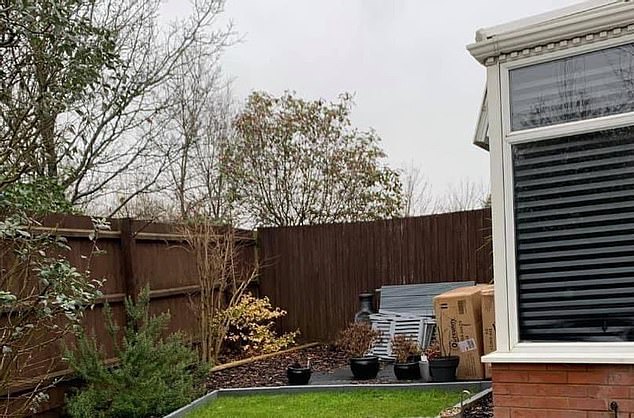 Before starting the project, Melissa said the toughest part was clearing an area and getting rid of all the weeds 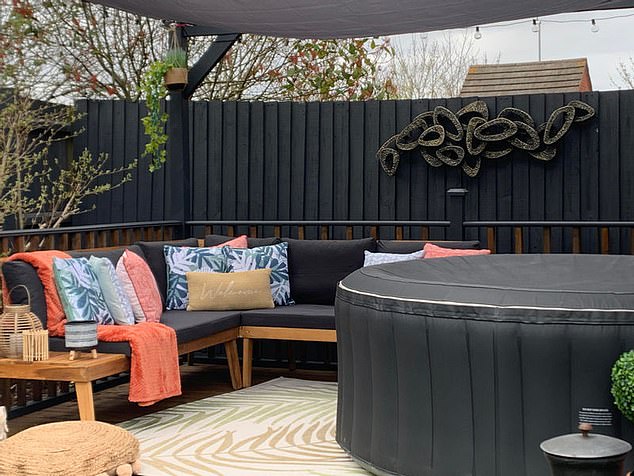 Melissa’s hot tub was a special buy from the middle of Lidl around four years ago, and she decided to place it on the deck

‘Then it was onto the staining and painting. I loved this part as my creation was all starting to come together.

‘The most enjoyable part for me was 100 per cent styling the area.

‘Someone joked last year I’d be building an extension next!

‘Not quite but this was definitely the biggest task I’ve ever decided to tackle, with the help of YouTube. 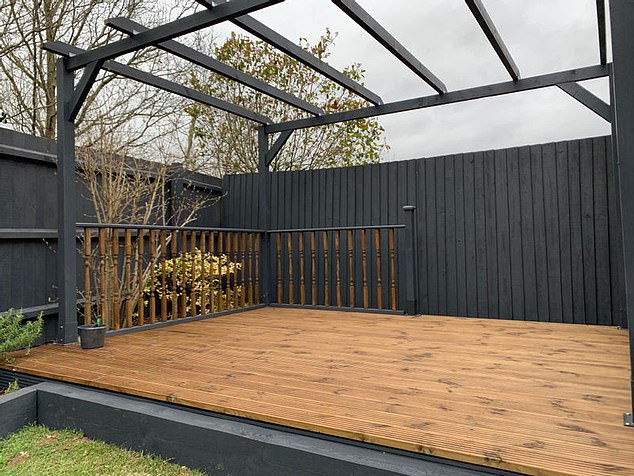 When using cement for the foundation, Melissa learned to mix near where she was placing it, so stop it hardening too soon 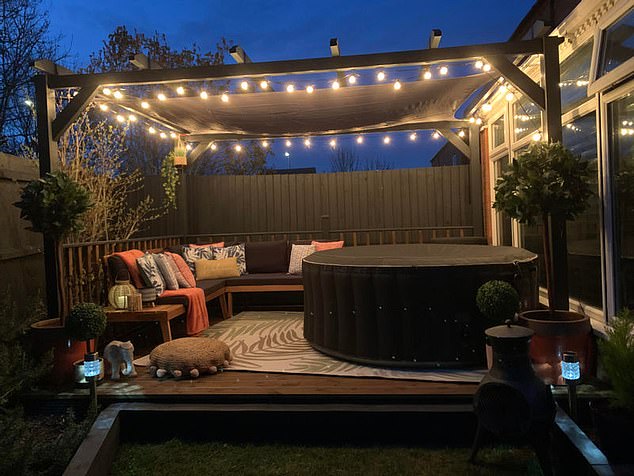 ‘The hardest part was definitely mixing the cement. In total, it cost me around £540.

‘The decking came as a kit from Merit Garden Products so everything I needed was supplied.

‘The rest of the money went on decking stain and paint from Screwfix.

‘The hot tub was a special buy from the middle of Lidl about four years ago now.

‘The seating was from Aldi special buys a few years ago now and came with a table.

‘I thought it would look ideal in this area to relax on.

‘I already had an image in my mind before I started and to be honest it turned out way better than I expected.

‘I’m over the moon, and I now enjoy my morning cuppa out there in peace.

‘It was bloody hard work, but I’m so pleased I gave myself the challenge.

‘Where there’s a will there’s a way. Saving so much money has inspired me to do more things myself.’