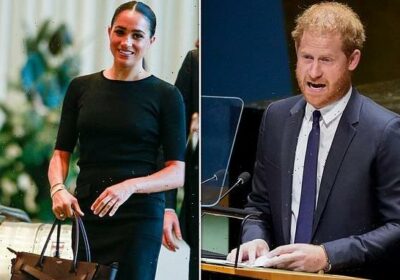 SARAH VINE: Oh, Harry, please stop being such a preachy, dreary bore… Why the hell are you so miserable?

There are many unsolved mysteries in the world. Who really built the pyramids? Where do all the odd socks go? Why do I remember the bags for life only when I’m halfway to the supermarket?

But perhaps the most baffling of all is this: why the hell is Prince Harry so damn miserable?

Dear God, the man is a walking wet weekend, a human root canal. Which is odd, because who wouldn’t want to be him?

There are plenty of people with much harder lives than Harry who still manage to get up in the morning and paint a smile on their faces. So why does he always look like he’s just trodden in something unpleasant?

He was at it again this week. Addressing the United Nations in New York on Monday, he delivered a message of unrelenting misery.

Like a vacuum-cleaner of doom, he sucked all hope and joy out of the room, marking Nelson Mandela Day — named in honour of one of the most inspirational men of the 20th century — with a finger-wagging lecture on failure. 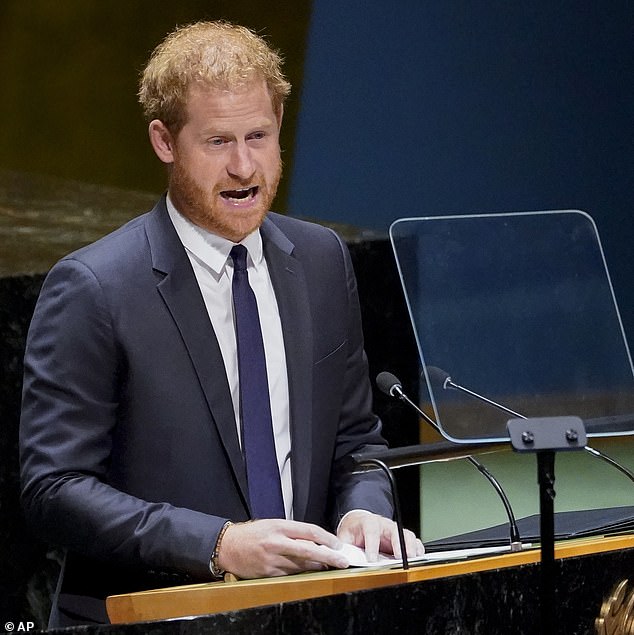 Pictured: Prince Harry addresses the U.N. General Assembly during its annual celebration of Nelson Mandela International Day, Monday. But perhaps the most baffling of all: why the hell is Prince Harry so damn miserable?

We live in a ‘time of global uncertainty and division, when it’s all too easy to look around and feel anger or despair’, he intoned.

‘How many of us feel battered, helpless in the face of the seemingly endless stream of disasters and devastation?’

Plenty, I’m sure. But we pick ourselves up, dust ourselves down and get on with it. Even those who don’t have airy, hilltop mansions in California to retreat to, Harry.

He talked about ‘the few weaponising lies and disinformation at the expense of the many’, a statement so paranoid it could have been written by Donald Trump.

Oh, and climate change: ‘Our world is on fire — again!’ Well, maybe if some people stopped taking so many private jets . . .

Ever since Harry escaped a life of unbearable servitude at the expense of the British taxpayer, this has been his mantra. The Prince with a conscience, preaching from his lofty tower.

He’s fraught with First World guilt and tries to purge himself with endless hand-wringing and virtue-signalling. What he fails to realise is that none of it has the desired effect. He just ends up getting on people’s nerves.

Because there are few things more offensive than an ingrate, and Harry is the greatest ingrate of them all. Here’s a man who has everything and all he can do is carp, criticise and tell the rest of us how to live our lives. 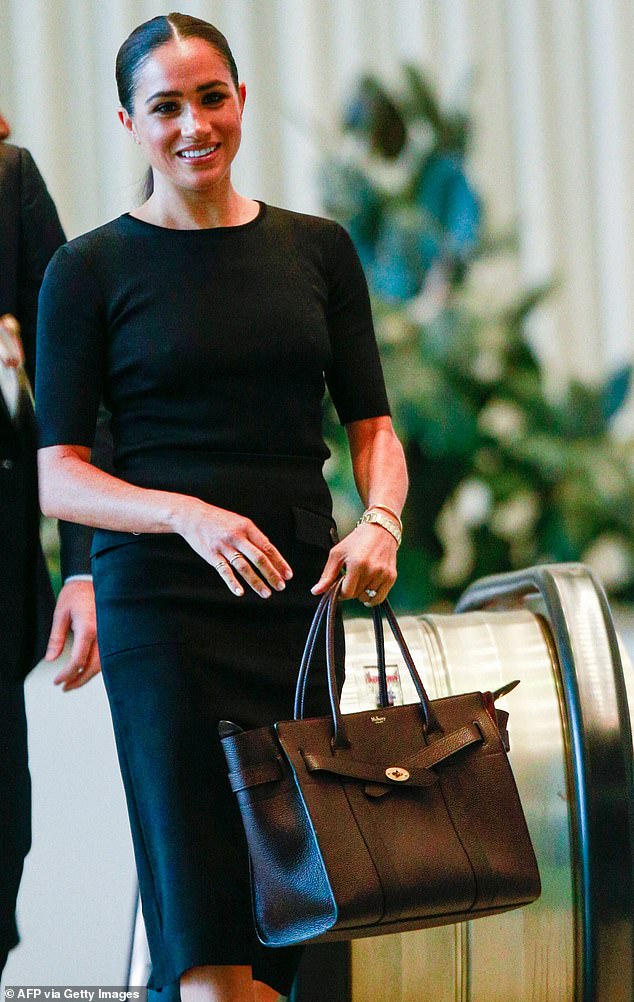 Prince Harry could barely even muster a smile when, after delivering his speech, he and Meghan headed for supper at Tribeca hotspot Locanda Verde, where you won’t get much change from £90-a-head

I am not one of those people to begrudge the lucky their good fortune, but if you do happen to be one of life’s lottery winners, the least you can do is have the good grace to enjoy it.

Instead, Harry acts as though it were all some terrible burden.

He could barely even muster a smile when, after delivering his speech, he and Meghan headed for supper at Tribeca hotspot Locanda Verde, where you won’t get much change from £90-a-head.

His wife was by then on her third designer outfit in 24 hours, accessorised with her customary jewellery worth hundreds of thousands of pounds. Oh, such misery.

The whole point of being a royal or a celebrity — and Harry is both — is to offer a bit of escapism and light relief from the unrelenting realities of daily life. Turn up, smile, look fabulous, sprinkle a little stardust, spread a little joy.

To do this you need a healthy sense of humour (just look at the Queen, always laughing things off), not to mention more than a soupcon of self-knowledge.

Harry seems to possess neither. Whether as a result of Meghan’s influence — as some, certainly his old chums, seem to think — or as part of the wholesale rejection of his family, who knows?

But one thing’s for certain: the last thing the world needs right now is the dreary preachings of this overprivileged bore.

Want to do us all a favour, Harry? Go and enjoy your new life in America. After all the trouble it’s caused, it’s the least you can do.

Penny Mordaunt says she represents the future of the Tories. But look at who’s around her: more old hams than Tesco’s discount aisle: Michael Fabricant, David Davis and Andrea Leadsom. Not exactly Westminster’s young dream, is it? 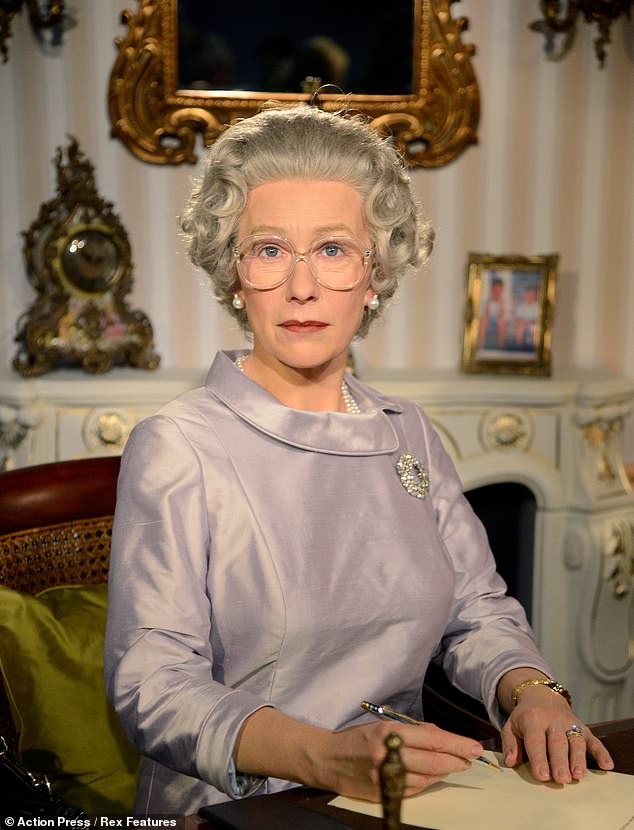 Dame Helen Mirren reveals that when she was playing the Queen (above) at one of the most painful chapters of royal history, she wrote a heartfelt letter to Her Majesty, saying that ‘in my research, I found myself with a growing respect for her’

Dame Helen Mirren reveals that when she was playing the Queen (right) at one of the most painful chapters of royal history, she wrote a heartfelt letter to Her Majesty, saying that ‘in my research, I found myself with a growing respect for her’. Surely if she’d really cared that much, she wouldn’t have taken the role in the first place. 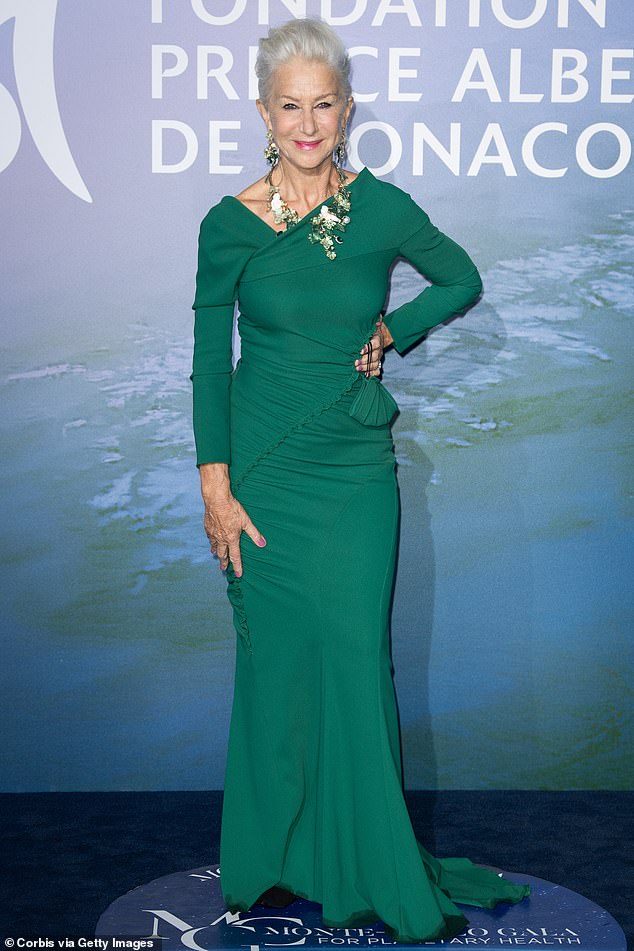 Surely if she’d really cared that much, she wouldn’t have taken the role in the first place

The only other time I’ve experienced heat above 40c was on a summer trip to Seville some 30 years ago. That year, the temperature hit 45c in the afternoon and the only sane course of action was to lie down in a darkened room.

Perhaps now British Summertime should not mean the clocks going forward — but a Spanish-style long lunch and a nice snooze in the afternoon. Works for me!

If you want a glimpse of where education in Britain is heading if the Labour Party comes to power, look no further than Southwark Council in South London.

Instead of excluding badly behaved secondary pupils, schools will allow them to remain in class providing they do not put another child’s safety at risk.

In other words, so long as they’re not actually knifing their classmates, they can do whatever the hell they want.

Meaning, of course, that an entire school will be sacrificed for the sake of a troublesome minority.

That’s Labour dogma in a nutshell: bring everyone and everything down to the lowest common denominator — and ensure that no one succeeds.

Kate Beckinsale has proudly posted pictures of herself hand-feeding a fox cub. Clearly, she doesn’t have to worry about these disease-ridden urban pests upending her bins like the rest of us. 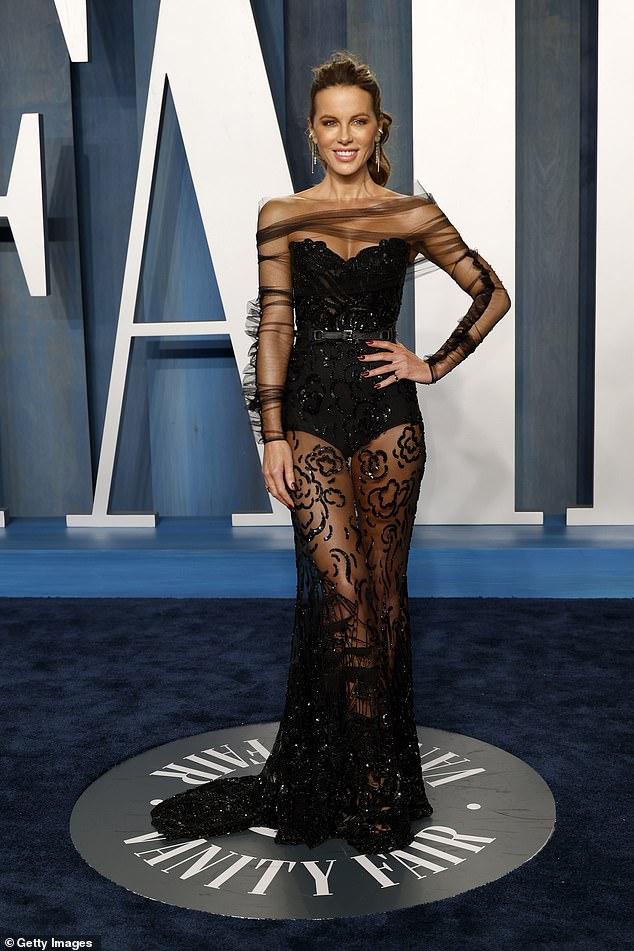 Kate Beckinsale has proudly posted pictures of herself hand-feeding a fox cub. Clearly, she doesn’t have to worry about these disease-ridden urban pests upending her bins like the rest of us

Given the huge shortage of NHS dentists in Britain, I really don’t see why the taxpayer should have to foot the bill for people who get cosmetic dentistry in Turkey on the cheap, and end up with terrible complications.

There are children and pensioners who can’t access even basic care — why should they suffer because of the vanity of others?

The mayor of London, Sadiq Khan, says it is ‘astonishing’ that the Tory leadership contest is taking place during the heatwave. Trust him to politicise even the weather.

Former Pink Floyd band member Roger Waters, 78, has hit out at critics for not reviewing his gig in Toronto — instead, giving the column inches to local singer The Weeknd.

With typical humility, Waters said: ‘I have no idea what or who The Weeknd is, because I don’t listen to much music.’

I had the misfortune of going to a Waters gig once. Honestly, the most tedious ego trip I’ve ever witnessed.

He’s also on his fifth marriage, which perhaps tells you a little about the character of the man.

I have zero time for people who leave their dogs in their cars on days like these. There is only one word for it: evil.

Kylie glosses over her rank hypocrisy

One minute Kylie Jenner is urging her fans to go green to save the planet, the next she’s hopping on her private jet for a 12-minute trip that wouldn’t have taken much longer by car.

I don’t know why anyone is surprised — after all, she made a fortune selling lip-gloss to gullible young women desperate to achieve her perfect pout, when said pout is in fact the result of fillers. But this takes ‘Do as I say, not as I do’ celebrity hypocrisy to a whole new level. 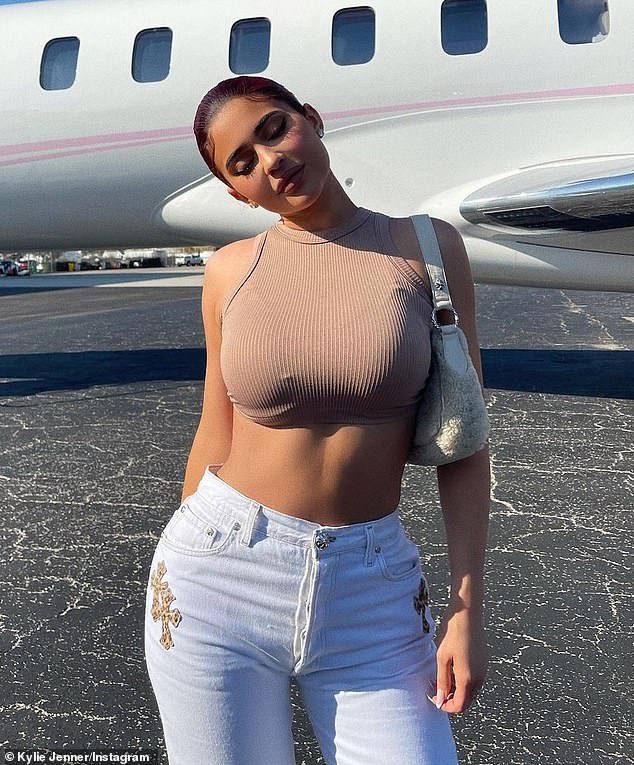 One minute Kylie Jenner is urging her fans to go green to save the planet, the next she’s hopping on her private jet for a 12-minute trip that wouldn’t have taken much longer by car

It may not be to everyone’s taste, but scientists at Reading University have discovered that eating Marmite can help lower levels of anxiety. Perhaps that explains why I love the stuff so much.

Although that could also have something to do with the fact that it usually comes on a big, fat slice of hot buttery toast.