An interim report from the royal commission into defence and veteran suicide is expected to focus on the large backlog of compensation claims but veterans’ families say that is only part of the complex problem. 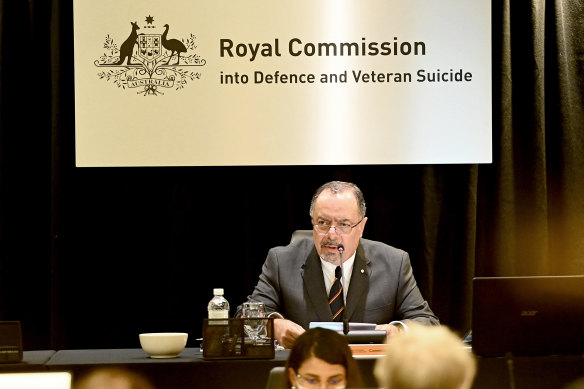 Nick Kaldas, chair of the royal commission into Defence and veteran suicides, will publish an interim report on Thursday.

Broad themes that have come out of hearings around the country include the problems with the large backlog of claims the Department of Veterans Affairs is dealing with and the numerous recommendations from previous inquiries that have not been acted on.

Former veterans minister Andrew Gee told the royal commission there was a clear link between the backlog of claims and suicide rates within the defence community.

He said despite the limited staffing for claims processing, he was made to cut $430 million from the department’s budget.

Renee Wilson, chief executive of Australian War Widows NSW, said the issues around suicide were incredibly complex, and the royal commission offered a real opportunity to look at all aspects.

“The claims backlog is only one part of the problem of Defence and veteran suicides,” she said on Wednesday.

“For us, it really comes down to the fact that the veterans system is outdated. It no longer meets the needs of those that it was set up to support.”

In December, the department had 51,000 claims on hand and was processing 17,000 of them, the royal commission heard. The total number of claims had grown by nearly 50 per cent over two years to July 2021 and the department was unable to keep up.

The government promised during the election to add 500 more staff to DVA. Work has already begun to also convert temporary staff to permanent positions to improve retention.

But Wilson says adding more staff is a short-term solution.

“We need to fundamentally change up the way we’re working and how we’re working to ensure … the families are brought in and not left alone trying to look after someone with a mental illness, which is incredibly difficult in and of itself,” she said.

“Veterans don’t exist in a vacuum. However, that’s how they’re currently treated and supported by the veterans’ system.”

Chief of the Defence Force Angus Campbell said during two days of evidence in Townsville in June that although Defence was “doing a great deal” it was still “not doing enough to reduce the incidents of suicide and suicidality”.

Department of Veterans Affairs secretary Liz Cosson also acknowledged to the commission that the claims process and delays could harm the mental health of veterans.

She said resourcing limitations prevented the department from doing everything it wanted to on mental health support and suicide prevention.

The royal commission was established in July 2021. It has held hearings around the country, including in Hobart over the past week, where it heard from Tasmanian senator Jacqui Lambie about her personal experiences.

The commission’s final report is due in June 2024.