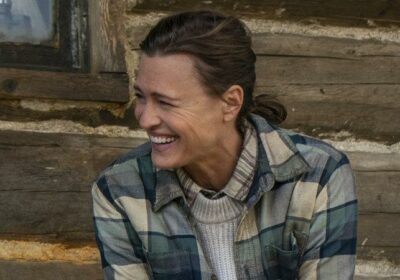 We may all handle grief in different ways but in Land, Robin Wright’s Edee Holzer takes things to unusual extremes.

Devastated by some unexplained sorrow, she takes off for the mountains of Wyoming, buys a
dilapidated cabin sight unseen and holes up there without a car or any means of communicating
with the outside world. 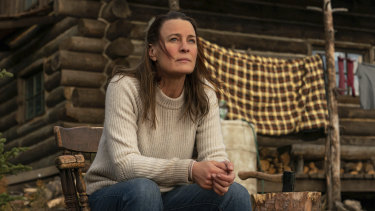 Edee (Robin Wright) on the porch of her mountainside cabin retreat in Land.Credit:Universal

It’s not as if she’s familiar with the backwoods and all it takes to endure its privations. City bred, she’s yet to master the art of splitting logs for the wood fire necessary to keep the cabin’s temperature above freezing point.

Land is the first feature to be directed by Wright, who acquired a taste for the job when working on
House of Cards, the series in which she co-starred with Kevin Spacey, and it takes her a long way from the Washington hothouse where most of that series was set. Instead of claustrophobia, we have agoraphobia. The film was shot in the wilds of Canada’s Banff National Park where the splendours of towering peaks and limitless skies fail to cushion the accumulating miseries of Edee’s valiant but doomed attempt to keep hypothermia at bay. 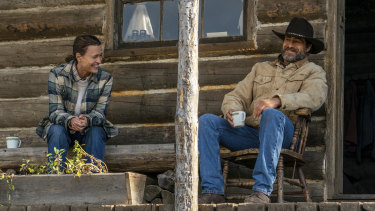 Wright has a natural air of authority – something to do with her height, her cheekbones and her
ability to maintain a grave and steady gaze in the harshest of circumstances. This makes the action
even more implausible as she bumbles about trying to keep warm in a hut devoid of insulation and
lit only by the underfed fire. I did spot a kerosene lamp but I have no memory of seeing it working.

Even so, Edee manages to keep herself going on baked beans and other canned delicacies until a
grizzly bear wanders in while she, luckily, is outside. It demolishes her remaining stock of food and
starvation looms until a guardian angel appears in the engaging shape of the Mexican actor, Demian
Bichir.

He turns out to be well qualified to deal with her anti-social attitude which is hardly surprising. After all, he got his big break in the American version TV series The Bridge, where his role was to remain calm and reasonable no matter what. His co-star, Diane Kruger, took care of the series’ psychological complications as a fellow detective with Asperger syndrome.

In comparison, Edee could be called easy-going and once she’s thawed the two of them begin to
bond over singalongs from his iTunes playlist. It’s a welcome touch of light-heartedness and it
confirms Bichir’s ability to make you care what happens next, no matter how far-fetched.

He’s a local who knows the mountains well because he hunts there – only for food, you understand,
and we’re spared the sight of dying animals – but he gives Edee a few tips to augment her non-
existent bank of survival skills and she’s soon finding a new confidence in being able to fend for
herself.

The film enjoyed a successful launch at the Sundance Festival and it certainly has a firm grip on the
zeitgeist. Women going it alone to find redemption in resilience have never been more popular on
screen. Nomadland and Frances McDormand have eloquently proved that point. Wright and her producers found that their theme had become even more pertinent when COVID-19 introduced us to the concept of social distancing.

But there’s something so wilfully obtuse in Edee’s ill-prepared retreat into the wilderness that it distracts you from the film’s main aim – that we view her as someone so riven by grief that she can find solace only in nature. That, or she has a death wish which she has chosen to fulfil in the slowest and most painful way possible.

Wright’s determinedly understated style pays off in the end, however. She finishes with a sequence
of great poignancy and you won’t be surprised to hear that the warmth and the dignity of Bichir’s
performance are largely responsible for bringing it off.